This page describes the interactions between Coiny and Snowball.

In "Take the Plunge: Part 2", Snowball tells Coiny and Blocky that Flower is starting to get on his nerves. Later in the challenge, Snowball and Coiny can be seen chatting. When Golf Ball is insulting Snowball's intelligence, Coiny is the only one who is noticeably concerned when he notices Snowball growing angrier at Golf Ball.

In "Bridge Crossing", Coiny rants to Snowball about how the Announcer didn't even bother to try to his cake in "Sweet Tooth". Snowball tells him to hold on so that he can get back at Golf Ball. After he throws her off a cliff, Coiny asks Snowball if he was next. Snowball replies by saying no because Coiny is his friend.

In "Cycle of Life", neither Coiny or Snowball make the team for the Grapes to compete in the relay race. When their team wins, they agree to be glad that they won.

In "Insectophobe's Nightmare", Coiny and Snowball are sitting atop the Ice Cube Recovery Center Creator, wondering which of the six eliminated players will rejoin the game on their team.

In "Return of the Hang Glider", Snowball and Coiny agreed to vote for Leafy to win, and they both slap Needle and Match for voting for Firey and Bubble respectively.

In "Welcome Back", Coiny wants Snowball to come out the Tiny Loser Chamber first stating he's a great guy and that he doesn't deserve to be in the TLC any longer.

In "Getting Teardrop to Talk", Coiny asks Snowball if he can throw something into Cloudy's pot. Snowball asks what should he throw, then Coiny hands him Pin's blueberry seeds.

In the intro for Battle for Dream Island: The Power of Two, Coiny gives Snowball a high five, which surprises him.

In "Take the Plunge: Part 2", Snowball angrily suggests that Coiny should be picked on their team because Needle likes him more than she likes Snowball. Coiny seems to be concerned with how angry Snowball was getting at Golf Ball. The sight of Snowball pushing her off a cliff makes Coiny and the rest of the Squashy Grapes run away.

In "Power of Three", Snowball shoves Coiny out of the way at the last second to place 4th for his team.

In "Puzzling Mysteries", Snowball wanted Firey to be on the team but Coiny disagreed, asking "Why would you do that?"

In "Insectophobe's Nightmare", Snowball yells at Coiny on top of the ICRCC due to knowing an eliminated contestant would rejoin. 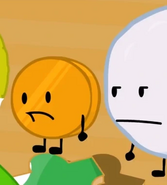 Do you want to kiss him or something?

Snowball agreeing with Coiny that Leafy should win Dream Island

Coiny asking Snowball to throw something

Coiny high fiving Snowball in the intro for TPOT
Relationships
Community content is available under CC-BY-SA unless otherwise noted.
Advertisement