GradedA
Conch Shell is one of the former eligible debuters for TPOT. They failed to join though, only receiving 815 votes, placing 21st.

Conch Shell is silent and always seems to have a blank, unimpressed expression. Conch Shell also seems very goth like, and doesn't seem too interested or concerned about certain things. This is shown by how they barely give a reaction like the other failed TPOT debuters when being eliminated from the debut.

Conch Shell is based off a seashell, though their design is more distinctly segmented than a standard conch. They are a creamy orange color, and they appear to have one eye concealed by the whorl (resembling "someone's hair covering their eye"). Their face is in the aperture.

In "Enter the Exit", Conch Shell can be seen when David runs away from X.

In "What Do You Think of Roleplay?", an actually smiling Conch Shell can be seen as Fanny walks past the recommended characters.

In "Return of the Rocket Ship", Conch Shell appears in the first two crowds of recommended characters.

In "The Escape from Four", Conch Shell was selected as one of the 26 recommended characters that could join Two's new season, The Power of Two. Conch's audition shows them looking at the screen in a bored manner and blinking.

In "You Know Those Buttons Don't Do Anything, Right?", Conch Shell could be seen with the rest of the eligible debuters on the ground. Due to Two being high up, nobody could hear them, even after asking Nickel to bring everybody up. Two then uses their telekinesis to bring up both the contestants and the debuters. Afterwards, the Cake at Stake starts.

Conch Shell, along with Boom Mic and Clapboard, is told that they aren't joining the show. They seem to feel indifferent about this and is sent falling through the roof's floor. 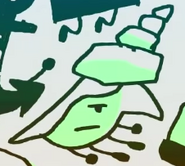 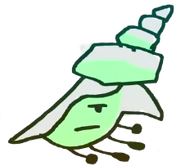