Currency is an item used throughout BFDI. The currency is equivalent to that of USD (United States Dollar). It consists of coins and dollars.

The Box of Paper Slips also seems to hold value. The desired amount of money can be written on the front of the slip, and it instantly gains value.

In "Sweet Tooth", Pen and Eraser want to buy cakes from Leafy for the challenge. Leafy charges $5 per cake, but Pen only has $8, which can only buy one cake. He finds $1.99 on the ground, which is still one cent short. Pen and Eraser then go to find Coiny to use him to buy another cake.

The Box of Paper Slips was introduced in an ad by Yellow Face in "Crybaby!". They were used by Pen and Leafy in "Vomitaco" and "Return of the Hang Glider" respectively.

Nickels were used as a Cake at Stake prize in "Vomitaco".

In "Insectophobe's Nightmare 2", Firey desperately bets his life's earnings to the Announcer, refusing to believe that he sold the Recovery Centers. Despite Firey's extreme doubts, Announcer confirms that he did sell them, so he wins the bet and thanks Firey for the free money. At the end of the same episode, Firey asks for his earnings back, but the Announcer reveals to have spent them on new Recovery Centers.

In "No More Snow!", a text states that Book sold Ruby's remains to make billions after she died from sadness. This didn't actually happen.

In "The Long-lost Yoyle City", Pin and Needle put Coiny and Nickel in close contact, which causes an explosion of coins and dollars to fly out of a portal. The money is stored in a giant bag offscreen, and Spongy is forced to carry it during the challenge.

Pennies can be seen throughout Battle for BFDI in Cloudy's collection, specifically in "Getting Teardrop to Talk", "This Episode Is About Basketball", "Return of the Rocket Ship", and "You Know Those Buttons Don't Do Anything, Right?".

In "Don't Dig Straight Down", the main objective of the challenge is to retrieve various emeralds hidden underground or inside Four's eyeball. It is unknown if these emeralds hold any value.

In "Let's Raid The Warehouse", Blocky pulls out an infinite money generator but tosses it aside for the empty box as a gift for Woody.

In "SOS (Save Our Show)", the Announcer gives himself a diamond medal and converts Four's bus into being made entirely out of gold. Leafy holds out a $4 bill as one of the donations given to the show.

Ruby, though not herself currency, is apparently worth "billions" when sold.

Pen using Coiny as a penny

Nickels for Cake at Stake

An explosion of money

Goldy, a recommended character that appeared in BFB 2 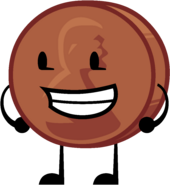 Penny, a recommended character that appeared in BFB 2 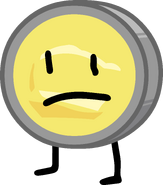 Toonie, a recommended character that appeared in BFB 2

Dollar Bill, a recommended character that appeared in BFB 4 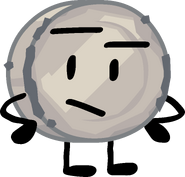 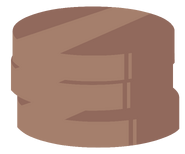 One of X's emeralds
Items
Community content is available under CC-BY-SA unless otherwise noted.
Advertisement