Cyanide is a type of powder and capsule medication that first appeared in "Sweet Tooth" as a brief cameo. It also appeared as a cameo in "Get Digging", and after a 5 year absence, it appeared in "Getting Teardrop to Talk", in the fourth season of BFDI, Battle for BFDI. It has appeared multiple times throughout the series.

Cyanide is typically in a jar and is generally in capsule form.

In BFDI and BFDIA, the pills are red on one side and white on the other.

In BFB, the pills are blue.

In "Sweet Tooth", Leafy pulled out a jar of cyanide when she said that there was a price to pay for her cake. She realized she had grabbed the wrong jar and got out the tip jar she had instead, because she had meant a literal monetary price.

Cyanide also appeared in the background in the episode as a blue powder substance as part of the ingredients that could be used for cake.

In "Get Digging", cyanide also appeared as a substance that Ruby poured in Team No-Name's Stew.

In "Getting Teardrop to Talk", cyanide made its reappearance in a jar filled with capsules as an object that Dora uncovered while she was digging for dirt to make islands. Flower took the jar, saying that she deserved the cyanide as a "treasure". She is after seen struggling to open the jar of cyanide when she was trying to pull the lid off of it. Flower notices Black Hole, and she asks him to open the jar, saying that he's strong. Black Hole reluctantly declines the offer, saying that he is infinitely small in singularity. Flower begs Black Hole to open the jar, and he accepts. He moves towards Earth, and later, as he moves to Goiky, the jar lid loosens and comes off. Balloony asks Flower what she's doing, and he is sucked into Black Hole, and Flower responds that she got the jar open. David and Pie fly by Flower from Black Hole's gravitational pull, and finally, the cyanide jar slips out of Flower's hand, to be sucked into the singularity by Black Hole.

Capsule of cyanide in season 1.

Flower cyanide jar opened, with Balloony on the right. 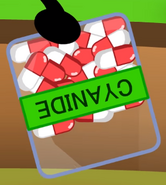 The cyanide jar from a 3D angle. 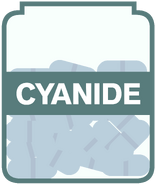 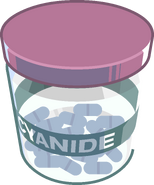 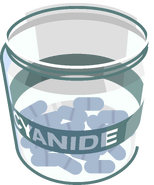