Battle for Dream Island Wiki
Register
Don't have an account?
Sign In
Advertisement
in: Characters, Generation 5 Characters, Males,
and 15 more

View source
watch 01:32
Battle for Dream Island Profile: David
Do you like this video?
Play Sound

For the species in general, see David (species).
For the voice actor, see David Brown (Boyinaband).

David is a male contestant in Battle for Dream Island and Battle for BFDI. He was created by TDICaitlincookegroup on YouTube after 39 voters voted for him to be eliminated, even though he wasn’t up for elimination at the time.

David joined the game due to him being the recommended character with the most votes in "Reveal Novum" at 102, beating Bomby at 73 votes, but he got eliminated in "Gardening Hero" with 331 votes and placed 8th overall.

He was on the team Beep in Battle for BFDI but got eliminated in "Enter the Exit" with 11,292 votes. He also makes appearances in Battle for Dream Island: The Power of Two.

David is a stick figure that is poorly drawn. His outline and facial details are gray, and his face is white. He turns red and has yellow zig-zagged lines that resemble lightning bolts surrounding him when he gets angry. He appears to have a blank stare most of the time.

In "Four Goes Too Far", he became orange, due to him being safe from elimination. He retains this character change in TPOT as well.

Due to a lack of things that he can say, David's personality is somewhat of a mystery. However, him saying "Aw, seriously?" shows us that he can be quite whiny and a person who complains a lot.

David is also quite antisocial, often refusing to follow the directions of others and quick to shout his catchphrase whenever greeted with conflict. This ties into his public status, as many of his peers find him odd and unnerving.

David is more dynamic in BFB. Though at times he is helpful to his team, he still has bouts of unruliness and stubbornness. This is best exemplified in "Fortunate Ben", where David helps his team by piloting the plane, but also falls asleep whenever he wants to, or in "Lick Your Way to Freedom", where David initially refuses to lick the jawbreakers. David fought against getting eliminated and ran away twice.

David is a human, but not like anyone you've ever met. He is allergic to sunrises and can duplicate his head when he sings. He's immune to bugs and the power of black holes.

David's personality is a mystery. He is antisocial. When conflict arises, he yells out his catchphrase, "Aw, Seriously?" David has been cloned many times, to the point that a sea of Davids has populated a region called Davidland.

Did You Know?: "NazzBliss" was the first person to mention David in a YouTube comment in February 2011, which had no explanation.

In "Vomitaco", David was first recognized when the Announcer explained that even though he was not even a contestant at the time, he had received 39 elimination votes. David says his catchphrase in response. David also responded "Yeah?" when the Announcer addressed him.

In "The Reveal", it is revealed that David is one of the 30 handpicked recommended characters who could be voted into the game. David campaigns by turning red and throwing a temper tantrum, screaming "AW SERIOUSLY?!?!?!?!?!"

In "Reveal Novum", David's first day of competition begins when he receives the most votes to join the game. During the staring contest, he uses his red-faced temper tantrum ability to scare his opponents, causing them to flinch, blinking in the process. This strategy does not work against Pencil, however. David eventually blinks the next morning upon seeing the sun, due to his allergy to sunrises. Despite not receiving any points at the start of his game, he manages to earn second place in the staring contest and get 30 points on the scoreboard, avoiding elimination.

In "Rescission", David, along with Ice Cube, Rocky, Bubble, and Leafy all avoid the mud-caked shovels that the Announcer throws at them during Cake at Stake. This upsets Announcer, who proceeds to cry acid all over Ice Cube, Rocky, and David. David's points are later traded for 30 teddy bears. During the unicycle race, David (literally) begins beeping "Mary had a Little Lamb" as an 8-bit melody and has 3 heads at the end. Right before reaching the finish line, he runs into Firey and burns to ash. Unable to finish the race, he is put up for elimination along with Ice Cube and Spongy.

In "Gardening Hero", David is eliminated with a record of 331 votes. It is later announced that a loser is going to rejoin the game. David campaigns by saying his catchphrase. When Announcer demands that he should say something else, he yells, "NO!". This marks the 2nd episode in which he said something other than his catchphrase.

In "The Glistening", David is one of the 10 eliminated contestants who vote Ice Cube to be eliminated, saying "Aw...-Ice Cube!" while turning into Steven. This marks the 3rd episode David says something other than his catchphrase. It is later revealed that David received 41 votes and placed 7th in the rejoin, which was not enough to rejoin.

In "Insectophobe's Nightmare 2", because he is immune to bugs, David is the only contestant to survive the bug attack. Announcer then decides to recreate everyone by cloning David 20 times, 17 for the TLC members and 4 all dressed in costumes for the final 4 contestants. It is unknown if the true David is present among the clones. All the Davids disappear when everyone returns.

In "Return of the Hang Glider", his final appearance, David chooses to say his catchphrase instead of saying "Cake at Stake!" with the rest of the eliminated contestants. At the final Cake at Stake, David votes Leafy to win Dream Island, expressing his opinion by transforming into "Leafy David" from "Insectophobe's Nightmare 2". After Firey wins Dream Island, he is initially reluctant to let David in, but is convinced when David says his catchphrase. After David enters Dream Island to find it gone, he does not appear for the rest of the episode.

In "Yeah, Who? I Wanna Know", David only gets 251 votes to join, which is not enough to compete in BFDIA. He is flung to the LOL along with all of the other ineligible contestants.

In "The Long-lost Yoyle City", Team No-Name was traveling on Puffball through Davidland, which (as the name implies) is a land full of Davids.

In "Welcome Back", David is trapped inside the Locker of Losers along with all the other contestants who didn't compete in BFDIA. He is also seen trying to escape the LOL by using his angry "yelling" while repeatedly smashing himself on the lid. At the end of the episode, he is given a chance to join the show by being voted out of the TLC.

In "Getting Teardrop to Talk", David is first seen almost getting sucked into Black Hole before the intro. David is the second-to-last person to be picked for a team since Gelatin deems him "weird". Despite this, Leafy brings David onto Beep, stating she wants to help him. When the team name is being discussed, David is impressed by it, saying "Aw", instead of "Aw, seriously?". David does not play an active role in the challenge, but repeats his catchphrase after his team wins.

In "Lick Your Way to Freedom", David initially refuses to start licking jawbreakers, much to the anger of Balloony, but later starts licking one with Nickel. Beep only opens empty jawbreakers and loses the challenge. In the stinger, David is seen still licking a jawbreaker, but Nickel tells him to stop because they already lost. They walk away as it is revealed that Taco is inside of the jawbreaker that David was licking.

In "Why Would You Do This on a Swingset", David falls into the bottom two of voting but survives with 3,934 votes. This marks David's first time surviving an elimination. Cloudy is disgusted when he finds that David is what a man looks like, causing Cloudy to almost vomit. David does not actively participate in the challenge, as Cloudy does the challenge for his team.

In "Today's Very Special Episode", David is heard making a disgusted grunting sound due to the cake Beep made for the challenge, for the cake batter is made out of Rocky's vomit. Once again, Balloony is angered by David's reaction.

In "Fortunate Ben", David manipulates his (assumed) hair to direct the team paper airplane, which earns him compliments from Roboty and Cloudy. However, he soon falls asleep, causing the plane to fall downwards in a nosedive. David is then woken up by Rocky's barf — to the relief of Balloony — and he resumes control of the plane and steers it away from the cliff. However, these efforts are wasted when Stapy causes the cliff to suddenly jut out, making Beep crash and lose the challenge. David is up for elimination once again.

In "Four Goes Too Far", David is in the bottom two for voting again. To this, he replies, "Aw, dreariously?". He survives when it is revealed that Roboty received more votes than him. When the challenge begins, David is one of the first contestants to get the twinkle of contagion, but he immediately gives it to Match. Clock has the twinkle after three hours, keeping David safe from elimination.

In "The Liar Ball You Don't Want", David does not appear at all despite being alive and present on Earth.

In "Questions Answered", David is first seen after Donut has pushed most of Earth through the camera, as he is repositioned by the change in gravity. Later, he can be seen with his team at their buzzer.

In "This Episode Is About Basketball", during the challenge, David is told by Cloudy that he and Woody are the only members of their team with arms (since Balloony is dead), therefore being the only ones who can throw balls into the basket. However, he replies with his catchphrase and doesn't cooperate when Woody tries to give him a ball. When Woody eventually lands a ball in the basket, he cheers. His team loses the challenge shortly after, so they are up for elimination.

In "Enter the Exit", David is once again in the bottom two for voting, though his teammates don't seem to care. He is eliminated with 11,292 votes and told by X to "be eliminated" like Stapy, but he instead shouts "NO!" and runs away. David is eventually caught at the edge of a cliff and stuffed inside X's head. X keeps David stuffed inside him until Four is recovered and picks him out, leading to him trying to run away again. However, Four grabs him and sends him to the EXIT. Once all the eliminated contestants are sucked up by Four, David says his catchphrase and enters the EXIT. Four tells the EXITors that one of them will be rejoining the show, followed by David saying his catchphrase. In his rejoining audition, David says "Aw" twice.

In "Get to the Top in 500 Steps", David only receives 1,255 votes to rejoin, which is not enough to rejoin. He says his catchphrase when he learns the news.

In "The Escape from Four", David attempts to escape the EXIT with the other eliminated contestants. He can be seen chanting for Loser as Loser builds the tower to Four's mouth. When Spongy shows to be an even closer path, he climbs in through Spongy's holes, having a hard time getting out because he keeps bumping into everyone else. David manages to reach the surface briefly but is sucked back in by Four.

In "You Know Those Buttons Don't Do Anything, Right?", David appears briefly in the stinger, watching Liy and Stapy with the other EXITors. 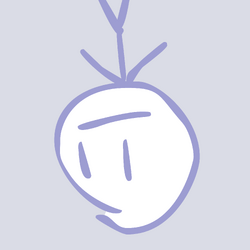