Donut's Diary is a diary that appeared in BFB 7. It has the same cover as Creatures of Goiky, suggesting that they are the same book, both the same blue color with the same odd symbols. The only difference between the books being the picture of Donut in the yellow oval in Donut's Diary. As the name implies, it is a book owned by Donut expressing his thoughts and findings. It was in the possession of Loser inside the Liar Ball until BFB 16. As of BFB 13, there appear to be sticky notes in some of the pages, as Loser must be taking note of some of the interesting finds in the diary.

The second copy of Donut's Diary was seen in "The Escape from Four". However, it is cyan and has the number two in roman numerals next to Donut on the emblem on the front cover.

In BFB 7, Donut tries to eliminate Loser by trapping him inside a Jawbreaker. Once Donut finally succeeds, he accidentally leaves his diary in there.

In BFB 16, the second diary is briefly shown when Loser grabs it from Donut, stating that he "needed new reading material".

In BFB 22, Donut's Diary II was used for Cake at Stake and was ripped apart by Four given to the Have Nots team for surviving the elimination.

In "Lo-Fi Beats to Yoyle To — BFB 21 on Friday, July 3", Donut was seen writing in his diary and listening to some music. 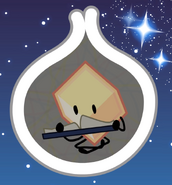 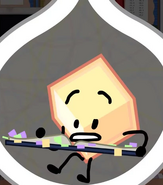 "I could really go for some chicken nuggets right now"

Donut's silhouette with his diary in "Who Stole Donut's Diary?"

Woody looking at the evil diary.

Donut's diary in the grand cake. 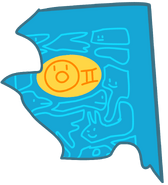 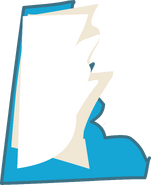