Frenemies
This article lists the interactions between Donut and Gelatin. Because Donut got eliminated first in BFDIA, and was still in the TLC in IDFB, they weren't able to really interact with each other. In BFB, their relationship is very similar to that of Fries and Gelatin's. Donut and Gelatin are friends in most cases, but whenever Gelatin wants to use Bomby as a means of winning or acts immature, Donut calls him out for doing so.

In "Getting Teardrop to Talk", when Donut says their team name has to be something solid, that stands out, and isn't dumb, Gelatin agrees by saying that they can't end up with something lame.

In "Why Would You Do This on a Swingset", Donut agrees with Gelatin's prospect that Team Ice Cube! goes "hard". Donut also refers to Gelatin as his brother.

In "Fortunate Ben", Donut pats Gelatin on the head for getting rid of Bracelety's trash.

In "The Liar Ball You Don't Want", when Donut explains the contest rules, Gelatin is leaning on him.

In "Return of the Rocket Ship", they both sit together during Cake at Stake. Gelatin also tries asking Donut what he should do when Ice Cube forces herself on the same seat as the two.

In "Don't Dig Straight Down", after Barf Bag is injured, Gelatin tells Donut he found something. When they are shown again, Gelatin tells Donut once again that he found something. Donut is skeptical at what Gelatin is trying to reveal until it's shown to be a hot spring, which Gelatin also claims could help refill Barf Bag. Donut for once agrees with him. When Donut sacrifices himself to save Spongy and dies in lava, Gelatin giggles, saying "I always liked deep-fried donuts!" However, this is proven to not be actual insensitivity when Gelatin tells an angry Barf Bag that dark humour is the way some people deal with tragedy, implying that Gelatin was actually very upset by Donut's death.

In "Getting Teardrop to Talk", Donut watches as Gelatin collects forks to make his large fork stack.

In "Don't Dig Straight Down", when Gelatin calls the new location an inverted planet, Donut tells Gelatin to excuse himself as the correct term is Buried Forest, Deciduously Insulated.

In "Getting Teardrop to Talk" and "Fortunate Ben", Donut yells at Gelatin for wanting to blow up Bomby.

In "Today's Very Special Episode", Donut inadvertently says that Gelatin is disrespectful to Bell by climbing her string. Gelatin calls him a party pooper.

In "Four Goes Too Far", Gelatin calls the Twinkle of Contagion the "Tinkle of Contagion". This angers Donut and he asks Gelatin why he always has to act like he's six years old. Gelatin responds with "'Cause I am".

In "This Episode Is About Basketball", Donut catches Gelatin trying to eat Fries's fries, yelling "Gelatin, what are you doing up there?!" Later in the episode, Donut gives Gelatin a stern look for almost suggesting that they blow up Bomby. When Gelatin finishes his sentence, saying Bomby should throw the balls, Donut doesn't believe that's what Gelatin was going to say.

In "Don't Dig Straight Down", an annoyed Donut tells Gelatin and Naily to stop playing around when Barf Bag is penetrated by Naily. Gelatin says "Nah" and they proceed to keep playing, much to Donut's annoyance.

In "The Escape from Four", after Gelatin shows his unenthusiastic attitude at Cake at Stake, Donut tells him to be a bit more polite. Gelatin just replies with another uncaring "Whatever".

Donut and Gelatin in "Four Goes Too Far"

Also in "Four Goes Too Far" 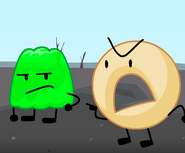