Eggy is a female contestant that competed in Battle for BFDI and The Power of Two.

She was one of the 30 recommended characters who had a chance at joining Battle for Dream Island during "The Reveal" and "Reveal Novum". She failed to join the game, however, receiving only 6 votes and placing 20th place, tying with Balloony and Pillow.

She also had 77 votes to join Battle for Dream Island Again, but placed 53rd place in the voting, and was treated with the Locker of Losers.

She is once again given a chance to debut in IDFB. Her IDFB redesign features a stout shape, where her spots are larger and are not near her face. She got 140 votes.[2]

She finally got a chance to compete in BFB, where she joined The Losers!, but as of BFB 16, she has switched over to TPOT.

Eggy appears to be a decorated or spotted bird egg since birds lay eggs with hard shells.

Eggy is quite kind toward outsiders and is very open when she is around people she can trust.

Eggy also seemingly values safety. She felt comfortable and safe when she was a baby egg (egg inside of an egg), and she wanted to glide through the competition without any danger. This trait is fitting as she is an egg, and eggs are known to be fragile.

She does however have her rude, assertive moments as she blamed Clock for ruining The Losers' winning streak and didn't feel the need to listen to Four's contest rules in "What Do You Think of Roleplay?".

Is Eggy hard-boiled or soft-boiled? No one knows. Obviously she is not scrambled or poached. She does crack easily, though, a fact that Book is eager to state. Despite this, Eggy is very confident, which often leads her to pick out flaws in others.

According to Eggy, in the past she never spoke much and was much more content. Also, apparently she used to be in an egg. An egg inside of an egg if you will.

Did You Know?: If Eggy suspects that someone isn't paying attention to her, she'll test them by adding "blah blah blah" to her sentence.

In "Half a Loaf Is Better Than None" and "Vomitaco", she appears as a background recommended character.

In "The Reveal", she is one of the 30 handpicked characters who could join the game. In her audition, a cannonball hits Eggy, breaking her in half. In "Reveal Novum", she only had 6 votes, which wasn't enough to join the game. She was then flung to the Locker of Losers.

In "Return of the Hang Glider", she sits in the large audience for the final Cake at Stake.

In "Yeah, Who? I Wanna Know", it's revealed Eggy only received 77 votes, which wasn't enough to join season 2. She was then flung into the Tiny Loser Chamber, alongside the other characters who didn't make it.

In "Welcome Back", she is given a chance to join the show and leave the TLC. Even if the season continued, she wouldn't have had enough to join.

Eggy made her first speaking appearance in "Getting Teardrop to Talk", where she tries to tell Teardrop a story, who responds by fluttering her arms, which Eggy views as a sign of disinterest. Lollipop says that she can relate, as she tried to sell Teardrop her Fork Repellent, but she "rejected" it using the same gesture. After Pillow's false "explanation" of arm fluttering, Eggy says that Teardrop is very hard to impress. Barf Bag tells the three that Teardrop did care, but as she can't speak, couldn't say it. Barf Bag's theory immediately gets rejected by Pillow and Lollipop, but Eggy tries to back Barf Bag up, saying that it "wasn't her fault" her brain was put in vomit. However, she flutters her arms, believing that the three don't take her seriously, making an enemy out of Eggy (on Barf Bag's side). She is later seen with future teammates Clock and Cake, begging Loser to let them be on the same team with him. They all get to join at once and form the team The Losers!. Due to Clock's idea, launching a basket to X, The Losers! are safe.

In "Lick Your Way to Freedom", she wasn't seen for a majority of the episode. When Loser licked Gaty out of a jawbreaker, Eggy tried to look inside, but she couldn't see anything. Pin eventually tells her Loser freed Gaty.

In "Why Would You Do This on a Swingset", she is first seen criticizing Four and X as hosts, along with Pin and Cake. After Cake sees iance using Fanny as a motor on their team's swing, he suggests using Clock as a motor for theirs. However, Clock's fastest clock hand moves at 1 RPM, saddening Eggy. However, Daylight Savings triggers Clock's fastest clock hand, and the Losers complete the 50 swings.

In "Today's Very Special Episode", her team quickly cobbles up a makeover of Four made from X put inside a paper mache statue, but despite that, her team barely avoids elimination. In the post-credits scene, she tells Teardrop the story about when she didn't speak. She says that when she was a baby (as she says, an "egg inside of an egg"), she realized she was content and had nothing to complain about, so she never spoke when she was young.

In "Four Goes Too Far", Eggy's first appearance in the episode is in the heart scene. She is seen later with Cake, getting the Twinkle. Loser then covers his team in one of X's old baskets, sheltering them from the Twinkle for the entire challenge. She is later seen with Loser along with her teammates but Coiny and Pin. After Bell breaks through the basket, Clock contracts the Twinkle, making his team lose. Eggy then says that she wanted to "glide" through the competition without danger, but Clock ruined it.

In "The Liar Ball You Don't Want", Barf Bag puts a popper on Eggy's head. At Cake at Stake, The Losers! sit next to Donut, but Donut says The Losers! don't have to sit so close. They promptly back away from him. Eggy and Loser end up in the bottom two. Donut tells Eggy that what she said in the last episode would effect her chances of staying. She refutes saying they should think about this. Eggy is then declared last safe with 4,759 votes, meaning that Loser is eliminated. Eggy gasps along with the rest of The Losers! and the recommended characters for this episode.

In "What Do You Think of Roleplay?", Eggy is first seen playing tic-tac-toe with Leafy, when Four tells her to pay attention. Eggy asks him why, stating that The Losers! know each other well, and that her team will win easily. However, Four tells her the Losers are actually missing someone. Eggy tries to guess who is missing, but she does not need to worry; missing contestants are excused. Later, Eggy wins her first tic-tac-toe game against Leafy, who exclaims that Eggy has not won a single match in 72 games. That makes Leafy guess she's the fake, which is incorrect.

In "Return of the Rocket Ship", Eggy requests for their "potentially dead teammate" to be recovered, but Eggy still doesn't remember their name. Leafy then drags her away to compete. Later Eggy is quick to stop Cake (who seems to adhere to Loser's "spirit") from going in the hole iance dug. Eggy claims that she has a "deep, spiritual connection to Loser", and shortly after argues with Cake on whose connection with Loser is stronger. This argument was defused by Coiny and Pin before it could get out of hand.

In "The Four is Lava", she gets recovered by Four at Leafy's request. Leafy asks her if they are friends and she replies with a confused yes. However, after Firey reveals that Leafy stole Dream Island, she is in major shock and anger. She is later seen with Firey and Needle, arguing about Leafy. She then asks Four to recover her dead teammates. She realizes that Clock had been missing from the team and attempts to lie about everyone really missing him in order to spare his feelings.

In "The Escape From Four", she walks up with everybody else to see Four struggling at eliminating Spongy. She is also in the crowd of characters who try to save the Exitors from being sucked back into Four. After Two shows off a couple of his powers, Eggy immediately joins Two's show. She is now one of the 40 contestants who will be competing on TPOT.

In "X Marks the Spot", Eggy agrees that X is a better host since he's the kindest one they've seen when compared to Four and Two. 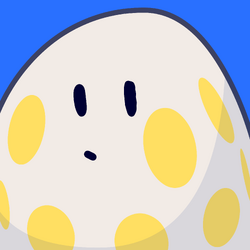