Battle for Dream Island Wiki
Register
Don't have an account?
Sign In
Advertisement
in: Articles with unsourced statements, Episodes, 2018 episodes,
and 4 more

To bring back Four (by Clock)

Cake for Cake at Stake

Embroidered strawberry cake, made by Pin

X approaches a sad looking Cloudy and asks why he feels that way. Cloudy states that he misses Balloony, and if he was alive, then their team would not have lost the last challenge. X sadly admits that he doesn't know how to recover people, and then says that it's time for Cake at Stake, which he has planned this time. He then trips over and then whispers to Cloudy that he's safe.

X quickly tells Beep that Cloudy, Nickel, Woody, and Balloony are safe while throwing slices of Pin's embroidered strawberry cake at high speed. X then announces that David is eliminated, then X tells David to be "eliminated" like Stapy. Instead, David yells "NO!" and then attempts to run away. X chases David while the recommended characters observe, until he corners David by a cliff.

Match walks over to Bubble, only to get shunned by her. She is then popped by a thrown piece of the cake. Match states that she needs her back, only to get insulted by Fanny. This prompts an argument between the two until Cloudy states that X is incapable of recovering contestants. It is then revealed that Donut couldn't recover anyone either. He had attempted to recover Naily but mutilated her in the process. Marker attempts to play Four but it doesn't work like last time, making Firey Jr. call him an idiot. Ruby then realizes that Four held the prize (a B.F.D.I.). Yellow Face in response says that without Four they are apparently fighting for nothing now. Then, a modified intro plays.

X (with David shoved in his head) tries to declare the 10th contest, but nobody can hear him, due to them all arguing. X tries to repeat himself, only to get interrupted again, this time by Clock yelling to bring back Four, making that the challenge. The contestants then try to bring Four back by making shapes of him in various ways. Teardrop tries drawing Four, Marker plays Four like in "Today's Very Special Episode", Blocky uses Needle, Pen, and Match to shape a 4, Pie tries breaking X's leg to form a 4, Gelatin bends a Fork prong to shape a 4, and Bottle whacks Golf Ball with a golf club while yelling "FORE!" and breaks the third pane on Cloudy's window. Pillow then licks Lollipop, who asks how that was going to help them bring back Four. Pillow responds by saying she was just hungry. Firey eventually uses the empty syringe (that was formerly containing the Twinkle of Contagion) to extract a liquidated Four out of Donut (despite not believing that would actually work). Pin is encouraged to squirt the liquid into the shape of Four due to her dexterity (as proven by the cake she made for Cake at Stake). She does it, and the liquidated Four transforms into regular Four.

Four thanks Pin by giving her a Gratitude Token for recovering him. X then runs over to Four to hug him, and tell him some of what events have taken place in his absence. Four then notices David's torso on top of X and yanks it out to see what it is. Freed, David resumes his escape, only to have Four instantly catch up and place him in Eternal Algebra Class Withfour. Clock then comes up to inform Four of all the dead and eliminated contestants needing to be recovered and taken away, to which Four does so. Four tracks down Roboty in the same waterfall he was at in BFB 2 and BFB 6 and stretches himself to space to retrieve the Liar Ball containing Loser. Clock then lists off the contestants needing to be recovered (Balloony, Bell, Bubble, Foldy, Remote, Naily, and Taco), making sure 8-Ball is also eliminated. Clock then also mentions Stapy, who gets upset due to being unable to say goodbye to Foldy. He is then also eliminated.

Roboty, Stapy, David, 8-Ball, and Loser find themselves next to the door to EXIT. Stapy tries to open it by reaching for the doorknob, which cues the normal intro to play. Inside, Pencil, Liy, and Leafy talk about whether Four is returning and what they will have to do if he does. The other five eliminated contestants then enter the classroom, surprising Liy and disgusting Pencil. When asked about the Liar Ball, 8-Ball explains what happened to Loser and how he fell from popularity. Bracelety says she still likes him until 8-Ball says that Ice Cube hates Loser. Four comes back while Pencil continues to complain about the male contestants. Four then announces that one of them will be rejoining Battle for BFDI, with each one trying convincing the voters to vote for them. It is revealed that while Four is interacting with the EXITors in their classroom, they are being completely still and unresponsive in the real world.

Taco walks up to Bell, and tries to have a conversation with her. Bell thinks it is a trick and ignores her. Taco then says that she is trying to have a normal conversation with her and apologizes for tricking her before. Bell does not accept the apology and says she doesn't trust Taco anymore while Lollipop watches them.

Characters who did not have any lines were not included. For a full list of voices, see Credits. 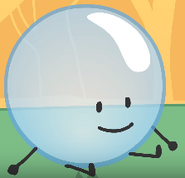 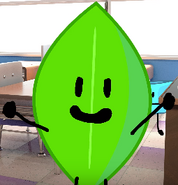 Leafy's arms are misplaced at 8:07