Best friends
This page is about the relationship between Eraser and Pen. They have an extremely close relationship, and generally work well together. They are also good friends with Snowball and Blocky.

In "Take the Plunge: Part 1", Eraser and Pen agree with each other that they are cool while Woody is such a scaredy-cat.

In "Barriers and Pitfalls", Pen and Eraser go together to find Blocky, who was supposedly eaten by a giant fish.

In "Are You Smarter Than a Snowball?", Pen and Eraser are happy to see Blocky with the test answers.

In "Sweet Tooth", Pen helps Eraser out by having $8 and finding a $1.99 dollar on the ground, so that both of them can buy Leafy's cake. However, 9.99 dollars wasn't enough, so Eraser thinks up an idea to take Coiny to Leafy because he's a penny.

In "Bridge Crossing", Eraser asks how they'll cross without a bridge and Pen easily spots a second bridge. Eraser asks Pen for a third bridge when the second bridge is broken. When Eraser says that he isn't going to get across with the bridge's rails, Pen asks Eraser if he wants to win Dream Island. Pen says that he does, and when he wins, it will be called "Pen Island" with no spaces and all caps. He falls off after Eraser discovers that the rails are only black bendy straws taped together.

In "Power of Three", Pen tells Eraser that Pin has to be the one eliminated or else one of them will be going to the TLC. They are put on the same team for the contest, along with Firey. When Firey falls into some water, Pen points out that water is Firey's poison and he'll die; Eraser says they have to go back to recover him with the FRC.

In "Puzzling Mysteries", Pen shows Leafy and Eraser his basketball spinning abilities. Eraser says he's better and spins three. In the stinger when Pen finds two pieces of the puzzle that fit together, Eraser says, "It's about time!"

In "Cycle of Life", Pen is carried by Eraser in the contest.

In "Don't Lose Your Marbles", Pen and Eraser ask each other if they found anything; Pen just says he has an apple. Later, Eraser explains that the "dumb Speaker Box" didn't like his ball; Pen once again says he only has an apple.

In "Half a Loaf Is Better Than None", Pen is dared by Eraser to jump over a small pit; Pen jumps it but barely makes it as he trips. He states it was the easiest thing he's ever done. Eraser tries to do the same thing but almost falls and calls Pen out to save him.

In "Vomitaco", Pen says "which is?" in place of Eraser, because Eraser had been eliminated.

In "Yeah, Who? I Wanna Know", Pen and Eraser are seen together looking at TV for the BFDIA voting results with Blocky and Snowball.

In "Getting Teardrop to Talk", the episode starts with Pen showing Eraser a "rectangle" which is actually a parallelogram, as corrected by Eraser. Pen then brings out a pentagon, causing Eraser, and soon himself to freak out.

Pen later tries to get himself, along with Eraser and Blocky, to stick together on the same team but Eraser hears the words "Free Food" and leaves. Eraser later asks why he's not near his pals anymore.

In "What Do You Think of Roleplay?", Pen, Eraser, and Blocky chat with each other at a bench table. Pen tells Eraser he's proud of how tolerant he's been towards Foldy since she's a pentagon.

In "The Four is Lava", when Eraser is recovered, he jumps towards Pen and Blocky who are happy to see him back.

In "You Know Those Buttons Don't Do Anything, Right?", Pen leaves his former team, Death P.A.C.T, to join Eraser's team. They high-five as they finally get to be on the same team again.

In "The Worst Day of Black Hole's Life", when Eraser dies, Pen tells Two to recover him, but they are currently waiting for the delivery of the recovery center. After Pen is revived, Pen recovers Eraser. During the challenge, Pen hands blocks to Eraser so that he can stack them. Eraser decides he's bored with the challenge and leaves to go knock another team's stack over. Pen says that might not be allowed, so Eraser asks what they're gonna do about it. Pen attempts to think of something but can't think of anything to say.

In "Insectophobe's Nightmare", Eraser doesn't seem concerned that Pen is getting hurt while doing the six-legged race.

In "A Leg Up in the Race", Pen has an unamused expression on his face when Eraser is knocked off the ladder with a water balloon.

In "Half a Loaf Is Better Than None", Eraser gets mad at Pen for saying his line/catchphrase "Which is?"

In "Getting Teardrop to Talk", when Eraser questions why he is not on the same team as Pen and Blocky, despite this being his own fault, Pen sarcastically responds with "Gee, I sure wonder!"

In "Four Goes Too Far", Pen asks Free Food, Eraser's team, to look at him so he could give them the Twinkle. Pen then starts to run around the team until someone sees him. 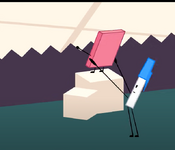 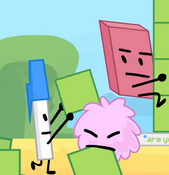