Battle for Dream Island Wiki
Register
Don't have an account?
Sign In
Advertisement
in: Places, Elimination, Abilities,
and 3 more
English

A pocket dimension inside Four

"Why Would You Do This on a Swingset" (mentioned)

"You Know Those Buttons Don't Do Anything, Right?" (shown)

Eternal Algebra Class Withfour (or its official acronym, EXIT, even though the acronym spells out Eternal Xalgebra Iclass Twithfour), or simply Eternal Algebra Class (mentioned by Balloony), is a pocket dimension located within Four where contestants went after they are eliminated pre-split in Battle for BFDI.

In EXIT, characters seemingly have to endure endless lessons and worksheets about algebra.

Four also shows suspicion about how Balloony knows about EXIT, and it is also unknown why Eternal Algebra Class's existence shouldn't be known, more or less as a secret.

It was not until "Enter the Exit" that Eternal Algebra Class was seen on-screen.

As of "Take the Tower", the EXIT is no longer used to send eliminated contestants to, and are sent to BRB instead via X's snap. The EXIT was seen again in the stinger of "You Know Those Buttons Don't Do Anything, Right?".

The EXITors last appeared in Four's imagination in the finale of BFB, "Chapter Complete".

Eternal Algebra Class consists of two parts within Four. The outside of the room is a dark and endless plane, with strange, blue tree-like growths with the shape of Four on top. This area is known as The Fourest. A door connects the Fourest with the classroom.

The classroom consists of pale blue painted walls, a chalkboard, a teacher desk, and numerous student desks. Lining the walls are multitudes of corkboards and posters. Oddly, the environment is completely rendered in three dimensions, whilst the characters remain two-dimensional. Elongated fluorescent lights brighten the room, attached to the ceiling. The wall adjacent to the door holds two long windows, yet only pure white can be seen "outside".

On the chalkboard, there is:

On Four's desk, there is a to-do list presumably written by Four. The contents written on it are as follows:

The last task that is written likely alludes to how Four quickly screeched at Clock in an earlier scene.

In the back of the room, there are two corkboards and a locked door. As of BFB 16, the door is boarded up and there is a sign taped to one of two cones guarding the door. The sign reads "STOP TRYING TO OPEN THIS DOOR". However, in "You Know Those Buttons Don't Do Anything, Right?", the barricades covering the door were removed by Liy, due to wanting to know what was behind it. The corkboard on the left has two papers each with computers drawn on them, as well as some small writing that cannot be read. Perhaps they are rules for the computer in that same area of the room. The other paper on the left cork board is a chart with Bracelety's name on it as well as some intervals of time written on it. This is a chart of Bracelety, Liy, and Leafy's computer time.

The corkboard on the right is labeled "My Project", and has four papers, each with one contestant's name on it. These are likely projects that each of the eliminated contestants made. There is writing on all of the projects but is too small to read. The images, however, allude to what the projects are about. Liy's project features an image of a coordinate plane with a smiley face on it, likely suggesting that it is about X and Y positions and possibly even Z positions. Bracelety's project has the function

written on it (which, when graphed, resembles a picture of Ice Cube), and Pencil's project has the equation

written on it (when graphed, makes a V shape) Leafy's project, however, is rather mysterious. It has lots of pairs of numbers written on it, written large and clear.

They look like coordinates because of the way the pairs are written, but when plotted on a coordinate plane, it results in this (shown right), which resembles the path that Leafy took with avoiding the nails in "Lofty" and the acid spitballs in "Get Digging", the path that Spongy took avoiding the lasers in "Gardening Hero", and the path Puffball took to avoid cannonballs in "The Four is Lava".

A more likely answer is that these are the "subtraction by 1" exercises that Pencil had mentioned, as well as some similar exercises. However, none of the equations appear to be solved, and there is also no other writing on her project.

In one of the corners of the class, a photocopier/printer is found, with the text "Ready" on its screen. On a nearby wall, there are four pages with the text "SEE YOU SOON ICE CUBE", likely written by Bracelety. Near it, a page is pinned to the wall with the text "

". There's also an old TV used to play the Cake at Stake theme when the contestants were rejoining. The room is updated with Roboty, Loser, 8-Ball, Stapy, and David's projects in episode 11, "Get to the Top in 500 Steps". Roboty's consists solely of Morse code with no graph or equation shown, Loser's is completely blank aside from his name, and 8-Ball's contains unreadable writing and the equation

. Stapy's seems to depict a large irregular shape with a black arrow emitting off of a nearby smaller shape, and David's contains only a single, unreadable word.

In "The Escape from Four", the room is updated again to reflect Leafy's rejoin, and Dora, Firey Jr., and Match's eliminations. The photograph of Leafy in the "EXITORS" bulletin board is obscured by a photograph of Match. Firey Jr. and Dora's photographs are pinned to the side of the first nine eliminated contestants.

A shot of the room in this episode shows the back bulletin board on the right (formerly labeled "My Project") with additional papers pinned. One of Leafy's papers appears to be missing and is replaced with a blank piece of paper. Firey Jr.'s and one other contestant's project is pinned to the bulletin board, although it is unclear what the projects read.

Of course, with the name of Eternal Algebra Class, and the appearance of a classroom, the eliminated contestants spend time doing algebra related activities. Pencil states that they perform activities such as "subtracting by 1" exercises, quizzes about graphing the y-axis, and rituals of the holiness of one digit even number perfect squares (the only one of which is 4, if you ignore negative numbers, numbers in different bases and 0).

Each contestant's quiz is done in a different way depending on each character. Pencil appears very disinterested, with doodles all over her quiz, Bracelety enters "ICE CUBE" in large letters to answer every question except the bonus question (which is 4), and Liy is taking a straight forward approach, simply answering the questions. She is shown stuck on Question 4. She had also written the phrase "How can I show my work for this?" in question 1, seeing as how it's a very basic subtraction problem.

In episode 11, "Get to the Top in 500 Steps", it is revealed what the rest of the contestants had done for their quizzes. Neither Loser nor Roboty wrote anything on their quizzes. 8-Ball had answered questions 1 and 2 correctly but had done 3 through 6 wrong, answering them all with 8. He also wrote the phrase "I don't have one" on the bonus question, referencing his denial of having a favorite number. David had simply written the word "NO!" on the paper in gigantic, scribbled text. Stapy had only written the number 4 on each question, except for the bonus question, with no work shown. Finally, Leafy had answered questions 1 and 2, as well as the bonus question, where she writes about how hard it is for her to tell. Questions 3 through 6 are not answered, and there are scribbles and doodles much simpler than the ones on Pencil's quiz.

Contestants that have entered the EXIT

The contestants listed in the order they were eliminated.

Pencil, eliminated in "Lick Your Way to Freedom"

Leafy, eliminated in "Why Would You Do This on a Swingset", rejoined in "Get to the Top in 500 Steps", eliminated again in "B.F.B. = Back From Beginning"

Roboty, eliminated in "Four Goes Too Far", entered EXIT in "Enter the Exit"

Loser, eliminated in "The Liar Ball You Don't Want", entered EXIT in "Enter the Exit", left EXIT in "The Escape from Four", eliminated again in "Let's Raid The Warehouse"

Stapy, eliminated in "This Episode Is About Basketball", entered EXIT in "Enter the Exit"

David, eliminated in "Enter the Exit"

Match, eliminated in "What Do You Think of Roleplay?"

Firey Jr., eliminated in "Return of the Rocket Ship"

Dora, eliminated in "The Four is Lava"

The Exitors appear to be seated based in the order that they were eliminated.

Back of the class 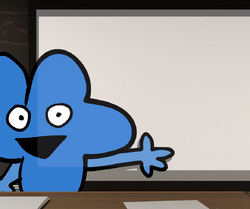