Battle for Dream Island Wiki
Register
Don't have an account?
Sign In
Advertisement
in: Recommended Characters, Characters, Females,
and 12 more

View source
watch 01:36
Who is Fanny?
Do you like this video?
Play Sound

Fanny is a blue battery-powered electronic desk fan with a very light periwinkle cage and periwinkle blades with jagged edges.

Fanny is a cynical and spiteful character, who is known to have a hatred of almost everyone and everything, making her disliked by several other people.

For this reason, she has very few friends and is enemies with many people who decide to even interact with her. She believes that self-improvement only occurs when we acknowledge that our own behaviors are far from perfect and worthy of hate. Fanny also seems to value honesty, as she is very upset when Loser lies to the remaining contestants in "The Liar Ball You Don't Want", and is not shy to call people out for their ridiculous behavior, as she tells Bubble that Match was a hypocrite due to insulting Bubble for not knowing the answers when she herself did not know them either in "Questions Answered".

However, despite her cynical, spiteful, and short-tempered nature, she isn’t evil nor arrogant. She is also honest, caring, and mature to those, especially Bubble. She is also outspoken.

Fanny is an electric fan who, it seems, doesn't need electricity to work. No one is quite sure how she runs. It's impossible to mention Fanny without talking about her catchphrase, saying that she "hates" everything from fulcrums to jumping.

Fanny's negative attitude causes her to get into arguments, especially with Match. One thing that makes her happy, though, is turning her fan blades and blowing things into people's faces.

Did You Know?: Fanny hates when people read random trivia facts about her.

In "Bowling, Now with Explosions!", Fanny appears in a crowd of recommended characters who are watching the Cake at Stake. They are all sealed in a metal box by the Announcer, which randomly sets on fire in the stinger ending.

In "The Reveal", Fanny was one of the 30 recommended characters who had a chance to join, with the campaign statement "I hate you."

In "Reveal Novum", Fanny brags that they'll be the ones joining the game. When Bell and Cloudy got eliminated, Fanny blew them away. Fanny only received 10 of the 450 votes (2.2% of all of the votes) and she was sent flying into the Locker of Losers.

In "Yeah, Who? I Wanna Know", Fanny once again had the chance to join BFDIA, but with only 153 votes, she placed 30th, and was flung into the Tiny Loser Chamber.

Fanny was one of the characters who the viewers could vote for to be freed from the LOL in "Welcome Back".

In "Getting Teardrop to Talk", Fanny is first seen saying "I hate you", not to Bracelety, but to Clock. Fanny justifies this by saying that our own actions are worthy of hate. Bracelety defends Ice Cube, who Fanny also states is worthy of hate. Bracelety tells Fanny she is worthy of hate, which Fanny agrees with. Bracelety is surprised, and thanks Fanny for "opening her eyes". Fanny later tells Fries she hates him. However, Leafy pops up and says she loves Fanny. Fanny isn't seen until sometime after Four's appearance and Pin's mutilation. Fanny, sitting on Cake, says that she hates living in a world without recovery. Lightning tells Snowball to pick Fanny for his team. Snowball is discontent with Fanny's lack of arms, but he accepts her for her aggressive attitude. When the members of iance suggest naming their team "the alliance", Fanny suggests taking "the all" from "alliance", naming their team iance.

During the challenge, Fanny says that she hates jumping. This upsets Pencil, who orders Lightning to zap Fanny. Bubble tries to stop Lightning, but after being reminded of her bembership by Pencil, Bubble releases Lightning, who zaps Fanny. iance ends up losing the challenge, which puts Fanny up for elimination.

In "Lick Your Way to Freedom", Pencil initially assumes that Fanny would be eliminated and that she would be safe, but X corrects her, saying that Fanny is safe and throwing a piece of cake at her. Which gets shredded by her propeller. During the challenge, Fanny can be seen licking the jawbreaker along with the rest of her teammates, and her team gets 2nd place.

In "Why Would You Do This on a Swingset", Match uses Fanny as a motor for their swing, propelling iance to a quick 50 out of 50 swings.

In "Four Goes Too Far", Fanny has a horrified expression when Donut injects the Twinkle of Contagion in himself.

In "The Liar Ball You Don't Want", Fanny points out the error in Loser's claim that he used to play with the poppers, saying that he couldn't have played with them, as they didn't exist an hour beforehand.

In "Questions Answered", Fanny appears in the stinger, criticizing Match for being a hypocrite, as she got mad at Bubble earlier in the episode for not knowing the quiz answers, yet she herself didn't know the answers. Bubble thanks Fanny for telling her, and Fanny proclaims she hates Match.

In "Enter the Exit", when Match wants Bubble recovered, Fanny tells her to stop pretending to care for her. Match starts to argue with her until being interrupted by Cloudy.

In "Get to the Top in 500 Steps", Fanny first appeared when Flower said she was going. She agreed with everybody else in her team. Snowball exclaims that they wanted to do it, and Fanny explains to him that it is safer to let Flower do whatever she wants. In response, Snowball grabs her by the leg and slams her on the ground, breaking her. Snowball then throws her body which hits Match.

In "What Do You Think of Roleplay?", Fanny walks up to Bubble and sits next to her for Cake at Stake, and angrily looks over at Snowball. It is revealed that Fanny survived her decapitation, only because her cord connecting the two body parts was still intact. Because of this, she has to drag her head around. She is safe with 2,768 votes. The burger slice is flung at her, knocking her over. When Bubble is distraught over Match's elimination, she tells Bubble that she doesn't need Match. When Bubble is killed, Fanny walks to "Four", and yells at them to recover Bubble. Fanny ends up winning for her team in the challege, explaining to Fries how she figured out "Lightning" was the impostor.

In "Return of the Rocket Ship", Fanny is first seen when Grassy says that he loves measles, mumps, and rubella, to which she responds that she hates them. Robot Flower then tells Fanny that she's on another team and flings her over to the rest of iance, which also puts her parts back together once she lands. Later, Ruby tries to get the rest of iance to dig, and after Fanny says that she hates digging, she realizes that she also hates hating digging. As they jump into the whole Lightning started, Fanny says that she hates that X's emeralds are down the hole, which causes Team Ice Cube! and Beep to follow them. Fanny helps rest of iance save Bubble from being crushed by two teams, only to be shocked when Flower pops her anyway.

In "Don't Dig Straight Down", when Fanny's team is close to finding an emerald, Ruby says that Golf Ball is right above them. Fanny says they must turn around and that she hates "bossy bot" Golf Ball. Her team finds another emerald and is then chased around by underground lava. When they are about to reach the surface, they turn around again due to Golf Ball being in the way. They proceed to do this over 2,763 times until Golf Ball is distracted by an alarm coming from her Underground Factory. iance finally emerges from the ground exhausted and are safe from elimination. Fanny ends up killed when lava shoots out of the tunnel her team was digging through.

In "The Escape from Four", Fanny is recovered and later follows everyone to watch Four struggle at sucking Spongy. After Four upgrades the BFDI to a BFB, she interrupts everyone's excitement and tells them that when she initially joined the competition, she was battling for a BFDI, and now that the prize had been replaced, the BFDI was being denied from not just her, but everyone competing. This causes a lot of the BFB contestants to switch over to Two's show, including herself.

In "X Marks the Spot", Fanny tells the Four Colored Team to stick to their own lame hosts show as they drive away without X, the host she actually prefers. They ended up lassoing him however, making Fanny yell that she hates lassos.

In "SOS (Save Our Show)", a poorly drawn Fanny appears in a made up scenario where BFB didn't split after episode 16, where she expresses her anger at Four for allowing Spongy and Loser to rejoin just because he couldn't catch them.

In "You Know Those Buttons Don't Do Anything, Right?", the contestants who quit BFB because of the prize change learn through TV that Four brought the BFDI back. Fanny isn't tempted to go back since she feels Four has betrayed their trust and for all any of them know, could continue changing the prize over and over, and everyone else agrees. Fries compliments her for her leader-like spirit but argues, while leaning on her, that Two isn't doing better since they've kept everyone waiting to compete. Two then appears out of nowhere, scaring Fanny and everyone else. When Two is upset with there being a prime number of contestants due to Winner joining, Marker doesn't understand the problem, so Fanny tells him that prime numbers are impossible to divide equally.

She joins Death P.A.C.T. after hearing Pen call them haters. They become Death P.A.C.T. Again. During the challenge, Marker tells the team that they can't use the elevator, making Fanny say that she hates broken elevators. Marker suggests using Fanny to propel everyone to the top, but Pie says she isn't powerful enough. Fanny is then shown blowing at Tree, who finds the breeze very comfy. Remote comes up with an idea involving them taking the stairs, which makes Fanny exclaim that she hates stairs. Her team eventually follows through with Remote's plan and run up many flights of stairs until they're high enough to use Black Hole's gravity. Everyone, except Fanny, is exhausted after going through so many flights. Remote collapses from exhaustion, so Fanny removes her old battery and replaces it with a new, blue one from herself. This gives Remote the energy she needs to continue walking up the last few flights of stairs, and while carrying everyone. After Tree drops a megaphone into Black Hole, Fanny exclaims that they should throw something else to get his attention and Remote pulls out the battery Fanny gave her, killing herself in the process. Tree manages to get Black Hole's attention with it, but he flies too slowly up and they lose the contest. Lightning blames himself for their loss, and Fanny reminds him that none of them heard Two say the extra rule. Fanny yells at Two for their bad directions as everyone else attacks them.

Fanny has stated that she hates the following things: 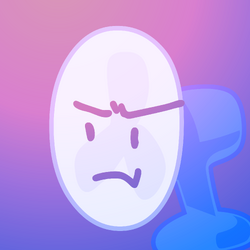