Battle for Dream Island Wiki
Register
Don't have an account?
Sign In
Advertisement
in: Articles with unsourced statements, Characters, Non-Objects,
and 7 more

Red
Similar to the Fish Monster, the Fire Monster is a worm-like creature with red skin. It has oval eyes and sharp teeth. The rest of its body is unknown because it swims in the lava, though it likely has a similar build to its aquatic variant.

In "Don't Pierce My Flesh", it eats Flower when she runs into it and Firey when he falls off the pole. 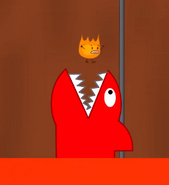