The slappers (along with Coiny) (Tennis Ball)

Firey is a male contestant and the winner of Battle for Dream Island. Although he won the competition, he didn't actually win Dream Island because Leafy bought Dream Island from the Announcer as revenge for not letting her get into the island.

Firey appears to be a flame. His outer flames are orange, his inner flame is yellow-orange, and his outline is a burnt orange.

In BFDI, Firey spent a good amount of time arguing and slapping Coiny. Firey can also be quite forgetful; e.g. him not realizing that lava can kill Leafy in Insectophobe's Nightmare 2, seemingly forgetting who Leafy is in "Get in the Van" and events afterward (though this is proven to be false). Though, by the end of Season 1, he seems to have developed more of a genuine understanding of his surroundings and interactions with the other characters, such as acknowledging his unintentional cruelty to Leafy and revealing his thoughts on the conflicts around him. He also displays signs of genuine sincerity, such as when he reveals his true feelings to Leafy about her.

However, from BFDIA onwards, Firey completely ignores Leafy and has a blank expression whenever in close proximity. The reason for this is explained in "The Four is Lava" when he tells Leafy that he didn't want to be associated with her because Leafy stole Dream Island. This paints him as somewhat selfish and uncaring, given how he's willing to lie about not knowing Leafy to save face. But doing this also seems logical on his end, given how Leafy stole Dream Island and committed other misdeeds, so if Firey were to "forget" Leafy, people wouldn't think poorly of him, and it could provide him a benefit in the competition.

Firey loves to win. He also likes to be complimented, but he's hard to pin down. He doesn't fit neatly into any one category. Some categories he's part of include: deathly afraid of heights, deathly afraid of crying, unable to swim, and won Dream Island.

Did You Know?: Firey is the lightest of all BFDI characters, only being weighed down by his limbs.

In "Take the Plunge: Part 1", Firey and Coiny were fighting on top of Spongy, but Coiny was the first to slap the other. Golf Ball said "Coiny, stop fighting!" and ordered them to stop. During the challenge, Flower pushes Firey and many others off of the balance beam.

In "Take the Plunge: Part 2", Firey was on the Squishy Cherries. Firey hit his hand with a hammer and was told to be careful. At the challenge, Firey stood in a wooden boat along with his teammates, and he was scared.

In "Barriers and Pitfalls", Firey is able to go through all obstacles, making Coiny fall off in the process. However, in the final part of the challenge, he is unable and unwilling to fill his team tank with water (as it is his poison) and has his team loses.

In "Are You Smarter Than a Snowball?", he is unable to finish his quiz because of the rain.

In "Sweet Tooth", he bakes his cake using himself and makes fun of Coiny for using an oven. He gets 19 points.

In "A Leg Up in the Race", after Coiny got eliminated, Firey started slapping Tennis Ball since he 'had' to slap someone, so Tennis Ball kicked him and they temporarily became enemies, but they eventually became allies again, as they worked together as partners in "The Reveal".

In "Bowling, Now with Explosions!", Firey "knocks" all 10 pins by somehow setting them ablaze and deducts point off of people who deducted others' points and Ice Cube.

In "Gardening Hero", he became friends with Leafy and talked about how David is weird. He has a hard time during the challenge, due to him barely being able to get a spaceship.

In "Return of the Hang Glider", Firey won BFDI with 406 votes. He invited everyone, However Leafy wasn't let on Dream Island, causing her to steal it. Then, Dream Island disappears. When Flower starts melting the recovery centers, Firey and Coiny tell her to stop, then they hug each other. In the end, before Leafy gets crushed, Firey swoops in to save her. Firey tells her that he's sorry for what he did and realized that all he wants is her friendship. Then they glide away, ending the episode.

In "Yeah, Who? I Wanna Know", Firey made it into the Top 20 with 724 votes, which was enough to get into Season 2. His favorite screen was some spikes with Coiny under it.

In "Get in the Van", Firey was brought back to life using the HPRC. When Leafy tries to talk to Firey, he doesn't remember who she is. Then, after Leafy is smashed by Gelatin's hammer, which Firey reacts to by saying "strangers are so weird nowadays". After finding out that the Puffball Speaker Box has been destroyed, he pulls out his old speaker box out of his flames, and it announces Cake at Stake.

In "No More Snow!" and "The Long-lost Yoyle City", Firey ties his legs with Gelatin's legs, which caused some trouble considering that they almost fell off of Puffball.

In "Welcome Back", Firey is seen screaming locked in a cage dangling from the top of the Yoyle Needy, which he was put in by FreeSmart as punishment for something yet to be revealed.

In "Getting Teardrop to Talk", Firey, who has seemingly escaped from his cage as said in the previous season, is first seen sitting with Coiny, trying to throw Pin's blueberry seeds into a pot. Taco then tries to throw Pin's blueberry seeds into the pot. She does this successfully and he and Coiny cheer until Pin asks if they've seen her seeds. As she mentions that the seeds are fast growing while the seed thrown in the pot starts to grow, they start to sweat. When Firey sweats he hurts himself. When picking the teams, Firey asks Loser if he wants to join his team with currently containing Coiny, Pin and Needle. When picking the names he wants the team to be called The Losers! During the challenge Firey and the rest of the team gush over Loser, until Pin says that they should focus on the challenge. Some of the contestants see this as insulting to Loser, resulting in Firey throwing Pin upwards into a basket, as an attempt to remove the "hater".

In "Why Would You Do This on a Swingset", Firey tossed Clock up onto the swing. He also asks Loser what to do when Clock's hands doesn't move fast enough.

In "Four Goes Too Far", he is slapped by Coiny when he suggests Black Hole has the Twinkle of Contagion, marking the first time Coiny has on purposely slapped Firey since BFDI. Clock is the last one to get inflicted by the twinkle, so the Losers are up for elimination.

In "The Liar Ball You Don't Want", his team is the fifth safe. He, along with the rest of his team, and the recommended characters, are surprised to see Loser be eliminated.

In "This Episode Is About Basketball", During the contest, Firey attempts to throw a ball into his team's basket, but he didn't throw it very far.

In "Enter the Exit", Firey unintentionally ejected the factor of Four from Donut using the Twinkle of Contagion's empty syringe. However, he was stopped from actually reviving Four by Needle, who suggested having someone more dexterous handling the recovery.

In "Get to the Top in 500 Steps", Firey first appears walking away from Leafy when she is about to say hello. He later gets into an argument with Coiny after he sees Firey doing nothing with a blank expression. Coiny picks Needle and the argument switches topics to speed. The argument ends after Firey claims that Coiny was the one who called him "slow". The Losers! end up winning the contest.

In "What Do You Think of Roleplay?", he appears with the rest of The Losers!. He does not speak.

In "Return of the Rocket Ship", he is once again seen with The Losers! with no lines. He can be seen when Four screeches Pillow and when Grassy recites A Better Name Than That's plan to get Emeralds.

He did not directly appear in "Don't Dig Straight Down", but he was briefly seen on TV when he spoke. Since Firey can survive in lava, it is likely that he survived the lava flood.

In "The Four is Lava", it is revealed that Firey did survive the lava, snatching Leafy before the intro. He proceeds to pretend he still doesn't know who Leafy is. Then, he states that nobody likes her anymore and that he can't let anyone know he's friends with her because then they'll hate him too. Despite remaining friends, he still thinks she still has her BFDI 25 attitude. The two continue to argue throughout the episode. Before the voting screen, Leafy reveals how Eggy is one of her friends in response to Firey's statement earlier that she has no friends. He shouts out how that can be possible when she stole Dream Island , much to Eggy's disgust. Firey can be seen talking about Leafy in the stinger ending. Where it is also shown that he, like the rest of his team, didn't realize Clock had been missing. 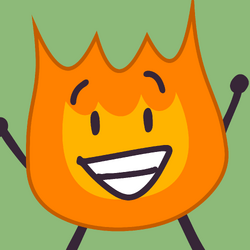 Characters
Retrieved from "https://battlefordreamisland.fandom.com/wiki/Firey?oldid=1654913"
Community content is available under CC-BY-SA unless otherwise noted.