For other uses, see Firey (disambiguation).

Michael Huang (in The Loser Plush is here!)

Firey Jr. is a male contestant in Battle for BFDI.

He reappeared as one of the characters who people could vote for to join BFDIA, but with only 179 votes, he wasn't qualified to join and was therefore flung to the TLC.

He had another chance at joining the game in IDFB. However, he got 1,374 votes and failed.[1]

Firey Jr. has a similar appearance to that of Firey; however, Firey Jr. is much smaller and has a thicker outline.

Firey Jr. usually tries to be thoughtful and is protective towards his friends such as Bomby and Spongy. However, when talking to people he does not particularly know or care for, he has been seen to show insensitivity and borderline rudeness. One big example of this is his interaction with Marker in "Enter the Exit".

He also seems to be very observant and an analyzer. This can be seen in "What Do You Think of Roleplay?" when he plays a big role in his team's attempts at discovering the impostor.

When insulted, Firey Jr. gets very defensive and may talk before thinking. An example of this is his elimination in "Return of the Rocket Ship".

Firey Jr is a flame, although a much smaller one than Firey. Although he tries to be protective of his friends, especially Bomby and Spongy, Firey Jr. is seen as largely insensitive. He resorts to name-calling most of the time.

Firey Jr. is best friends with Bomby but can't stand Naily, because he thinks she's annoying.

Did You Know?: Firey Jr is the lightest of all BFDI Jr characters, only being weighed jr down jr by jr his jr limbs jr jr.[sic]

In "Half a Loaf Is Better Than None", Firey Jr. walks into a vat of hydrochloric acid to retrieve the Announcer's marbles.

In "Return of the Hang Glider", Firey Jr. sits in the large crowd of recommended characters to watch the final Cake at Stake.

Firey Jr. received 179 votes to join season 2 in "Yeah, Who? I Wanna Know", which wasn't enough to join. Firey Jr. and all the other contestants who didn't get enough votes are then sent to the TLC.

In "Welcome Back", Firey Jr. is given a chance to join the show by getting voted out of the TLC.

In "Getting Teardrop to Talk", Firey Jr. asks Spongy if he and Bomby can join their team. He accepts on the condition of not being burned, and Firey Jr. responds with "No promises!". Later he tells Bomby to retrieve Bracelety when she becomes incapacitated. Firey Jr. later criticizes Gelatin with Donut for wanting to blow up Bomby.

In "Lick Your Way to Freedom", when Bracelety becomes sad that the contestant they rescued, Teardrop, wasn't Ice Cube as she expected, Firey Jr. says she will get over it.

In "Why Would You Do This on a Swingset", when Donut gives an encouraging speech, he says there is no one quite like Firey Jr.

In "Today's Very Special Episode", when Bracelety is announced to be out, Firey Jr. is surprised to discover that her name was not "Ringy".

In "Fortunate Ben", he is seen in an offscreen flashback, being held by the leg by Gelatin in an attempt to light Bomby while Liy stops him. During the challenge, he looks at Gelatin angrily when he suggests using Bomby to blow up the other plans.

In "Four Goes Too Far", Firey Jr. confusedly stares at Donut when he's about to pull out the Twinkle of Contagion.

In "The Liar Ball You Don't Want", Firey Jr. claims that Naily is ungrateful that Loser saved her. During the contest, Bubble throws the Liar Ball at Spongy at which Firey Jr. launches it elsewhere and says that they did not ask for it.

In "This Episode Is About Basketball", Firey Jr. looks at Gelatin angrily when it sounds like he was about suggest blowing up Bomby again.

In "Get to the Top in 500 Steps", Firey Jr. gasps when Four announces that an eliminated contestant is rejoining.

In "What Do You Think of Roleplay?", Firey Jr. chides Naily for stabbing Spongy. He later suspects Gelatin to be the impostor, as he hadn't attempted to use Bomby to win yet. Barf Bag rebuts him, though he remains dubious. When Barf Bag suspects Naily for not saying she "nailed it", Naily argues that she didn't because Firey Jr. said it was annoying, which he stands by. Donut states that Firey Jr. can't be the impostor, as there's no one quite like him. Firey Jr. turns on him, asking if he was "supposed to be mean.". This confuses Barf Bag, and he explains to her that Donut had to be mean in order to be eliminated first in BFDIA. Barf Bag defends Donut, leading Firey Jr. to grow suspicious of her. He agrees with Barf Bag that all Spongy does is sit around. Firey Jr. begins to suspect Bomby, but is cut off by Donut. iance wins off-screen, causing Team Ice Cube! to lose. Firey Jr. and Naily argue, blaming one another for their loss. He also scolds Spongy after the latter claimed he liked to "sail airplanes".

In "Return of the Rocket Ship", Firey Jr. was eliminated with exactly 10,000 votes. Barf Bag calls it a minor personal victory for him. Firey Jr. interprets the "victory" as a insult directed towards him, believing everyone is mocking him. As Firey Jr. starts to get sucked into Four, he states that he never liked anybody anyways, and calls his entire team garbage before he was sent to the EXIT.

In "The Escape from Four", Firey Jr. is first seen sitting in the EXIT, having to use Roboty as a seat. Later, Firey Jr. goes to hop into Spongy, though Stapy interjects, informing Firey Jr. that Spongy is flammable. After Stapy is forced back into Four, he apologizes to Firey Jr., and grants him permission to leave. Firey Jr. then jumps in and accidentally burns Spongy. Firey Jr. quickly retreats and apologizes to Spongy for harming him.

In "Chapter Complete", Firey Jr. is first shown cheering for Four. He overhears Flower wondering when Four is coming back, which makes him ask Four what that's supposed to mean. Later, Four argues that the contestants hating him isn't his fault and Firey Jr. refutes that he constantly kills them for fun, forces them to do math, and gets angry when they don't do it. Four then snaps Firey Jr., along with the other imaginary characters, out of existence.

In "You Know Those Buttons Don't Do Anything, Right?", Firey Jr. is first seen falling from the stack of items after Stapy knocks it over. He then watches Liy and Stapy with the other EXITors. 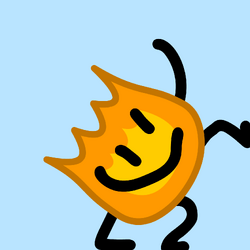