This page describes the interactions between Firey and Leafy.

In "Puzzling Mysteries", Leafy wants Firey on her team.

In "Cycle of Life", Leafy and Firey high-five when they win the contest.

In "Gardening Hero", Leafy and Firey play tic-tac-toe. Apparently they have been 73 times and Firey lost every game. When Leafy gets caught in a net, Firey is concerned. After the Cake at Stake, Leafy and Firey talk about how relieved they are that David is gone and decide to be friends. When Firey tells the Announcer that only good people get to be friends, Leafy says "Ooo burn". They work together in the contest to zap Spongy but miss every shot. Spongy shoots Leafy, upsetting Firey.

In "The Glistening", Firey agreed with Leafy on going back to earth when she just happened to have a bag of fuel. On the ride back, they are both happy to be going back.

In "Hurtful!", Leafy is happy that they both reached the final four. After Firey is killed by Flower, Leafy gets to the boat challenge and says she'll wait for Firey. Leafy offered to give Firey the larger boat because she knew he couldn't touch water, Firey thanks her. When Flower shoved Firey towards the lake, Leafy tried to rescue him but got burned in the process (and Firey fell in the water and died). When there are no boats left, Leafy says he can ride on her back as long as he doesn't set her on fire. Firey is glad but is knocked off her back by Flower and he dies once again. Leafy turns to him saying "No don't die".

At the end of the episode, Firey and Leafy sit together at night. Firey says that since the Announcer has a recovery center, they could kill him as much as they want and he'd still be back to give them Dream Island. Cut to the two, along with Bubble and Flower killing the Announcer over and over.

In "Insectophobe's Nightmare 2", when Leafy assumes that Bubble doesn't want to be friends again, she says she would rather be with Firey because he appreciates her presence. They ride on a Ferris Wheel together, but it's shown that Firey installed a lava fall which kills Leafy. In the same episode, Firey was disappointed that Leafy was dead and could not be recovered and even bet his life earnings on the Announcer bluffing that he sold the recovery centers.

In "Return of the Hang Glider", Leafy said she was going to be happy if any of them win. Leafy was impressed with how Firey let Flower and Coiny into Dream Island. At the end of the same episode, Firey wanted to apologize to Leafy and when the others wanted to execute her for buying/stealing the island, he flew on a hang glider and saved her. He then apologized and said what he wanted most was her, not Dream Island, and would rather be with her whether they are on Dream Island or not.

In "Get in the Van", when asked what she wants to do by Bubble, Leafy asks where Firey is.

In "Welcome Back", it is possible that Firey is trapped in the cage because he recovered Leafy, as possibly hinted in "The Four is Lava" as Leafy said that Firey recovered her a long time ago.

In "The Four is Lava", Firey saves Leafy from falling into the lava. When she asks why he has been ignoring her, he explains that nobody can know they are friends (due to most people still hating her), but that they are indeed still friends.

In "X Marks the Spot", Leafy appears to be walking towards Firey to possibly make up, until Four asks her if she wants to help him find X.

In "Take the Tower", Leafy thanks Firey for helping her get to be the first safe in elimination.

In "Who Stole Donut's Diary?", Leafy calls Firey out on his behavior, and the latter reveals he was the one who stole Donut's diary in retaliation for Leafy stealing Dream Island. Through an intense confrontation, the two finally make peace and hug (though Leafy is burnt to ash in the process). In order to save Firey from elimination and keep everyone from being mad at him, she says that she'll tell everyone she stole the diary. In a short clip at the end of the same episode, after Firey has been sentenced to clean the entire railway to Yellow Face's Warehouse, Leafy offers to help, an offer Firey graciously accepts, and they hug again with the exact same results as before (Firey even tells himself he has to stop doing it).

In "Fashion For Your Face!", Leafy shows Firey the sweater that Flower made for her. When Firey tells the Have Cots that he accidentally made the high-speed express train burst into flames, Leafy says that it's okay and that mistakes happen, to which Firey smiles. Leafy also requests Firey to ride a train to Yellow Face's Warehouse along with the other members of Have Cots, to which Firey politely says no, as to remain loyal with the other Have Nots members. However, Firey says that the next time, they will ride together.

In "The Game Has Changed", during the challenge, Firey tells Gelatin that he'd rather make a gift for Leafy then try to win the contest despite wanting immunity. Further explaining that Leafy has been trying really hard and that her efforts should be rewarded. Firey builds Leafy a Ferris wheel in order to apologize for neglecting her for so long. Leafy accepts his apology and loves the Ferris wheel he made, and they agree to go for a ride together. During the stinger, Firey and Leafy have apparently been riding the Ferris wheel for over 8 hours.

In "The Tweested Temple", when Firey is going to the BRB, Leafy holds him with her arm and feels bad that Firey didn't get the prize he wanted. But Firey tells her that he doesn't care about either Dream Island or A BFB anymore, because the only thing he cares now is that him and Leafy solved each other's problems.

In "B.F.B. = Back From Beginning", Firey asks if Leafy got eliminated and says he is sorry to her about it, but she tells him that she is sure it will be okay.

In "Don't Pierce My Flesh", when Firey was glad Rocky was gone, Leafy told him that wasn't nice. In the same episode, when Leafy said that they should use both replacement boxes, Firey shouted that they couldn't use both. When Leafy asks why not, Firey changes his mind. The Firey Speaker Box calls Leafy awesome when he announces that she's safe, Leafy thanks him for this.

In "Hurtful!", when Leafy throws Ice Cube into the furnace, Firey asks her why she even did so, since she wasn't even made of metal.

In "Get in the Van", Leafy greets Firey but Firey, for some reason, doesn't recognize her and doesn't even remember her when Leafy tells him her name. This makes Leafy sad.

In "Take the Tower", Leafy tries to tell Ruby and Taco not to fall off the bracelet out of fear of having to face Firey. When they both fall off, Leafy begins to have a slight mental breakdown. Firey recognizes the awkwardness of the situation and Leafy tries getting out of fighting him by doing jumping jacks and fake punches.

In "Fashion For Your Face!", When Leafy presents one of Flower's sweaters on her to Firey, he looks at Leafy with a confused look.

In "Bowling, Now with Explosions!", after the Announcer told Firey he won immunity, Leafy replied angrily to this, with Firey re-replying that she's "Green with envy!" Earlier in the episode, after Leafy subtracted points off of everyone, Firey subtracted Leafy's points for taking his.

In "Return of the Hang Glider", Firey didn't let Leafy into Dream Island because she wanted to get out of the Ferris Wheel that he made in "Insectophobe's Nightmare 2", causing Leafy to become angry enough to buy Dream Island, stealing it from Firey and everyone else out of revenge. Firey wanted Leafy away from Dream Island so much that he even boarded the doors so she couldn't come in.

In "Get in the Van", Firey actually felt relieved when Gelatin killed Leafy.

When Leafy is eliminated in "Why Would You Do This on a Swingset", Firey's lip twitches upwards for a fraction of a second, suggesting that Firey is happy for Leafy to be eliminated.

In "Get to the Top in 500 Steps", when Leafy is greeting everyone in The Losers!, Firey walks away when Leafy attempts to interact with him.

In "The Four is Lava", Leafy is hurt by Firey ignoring her intentionally simply because he thinks people hate her. Firey in response just calls her clueless for feeling this way and states that she expects so much from others. When he also says how that is why no one likes her, Leafy suggests that they never speak to each other again and Firey angrily agrees. Firey later goes back on this entirely because they need to do the contest. Leafy refuses to compete since she felt Firey would get eliminated for being cruel to her. At one point during the challenge, Firey and Leafy argue over whether or not if Leafy has any friends. Once they are safe, Leafy asks Eggy if they are friends to prove a point to Firey. Firey is shocked to see that Leafy does have a friend despite her theft of Dream Island. In the stinger ending, Firey can be seen angrily talking about Leafy with Eggy and Needle. Firey also gives Leafy an angry look when she reveals to Clock that it is episode fifteen.

In "Become a Jacknjellify Member" (not canon), the text in the screen said "Press to ELIMINATE Leafy" and he pressed the "Vote" button to eliminate Leafy, suggesting that he doesn't like Leafy.

In "Take the Tower", when Firey and Leafy meet on the bracelet, Firey mocks Leafy by calling her real fighting and fake fighting the same. He also makes unimpressed expressions at her when she tries to make excuses to get out of fighting him.

In "A Taste of Space", Leafy tears up when Firey calls her team the "Have Crybabies", and she helps her friends push him into the Sun.

In "Who Stole Donut's Diary?", Leafy calls Firey to the stand to ask him questions, which Firey is both annoyed and unsurprised by. Firey also mocks Leafy for her "Fournor" joke. Leafy asks Firey where he was when the diary was stolen, so Firey makes up a story about how Leafy stole it.

In The Game Has Changed, Leafy questions why Firey didn't stand up for her against Lollipop, and scolds him for not apologizing for ignoring her for years. She then walks away, telling him she'll talk to him later, in an angry tone.

Firey and Leafy in "Bowling, Now with Explosions!"

Ah, she saved him!

But Firey didn't save Leafy. 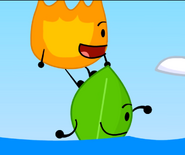 Leafy upset over the fact that Firey "forgot" her

Leafy attempting to approach Firey, only for him to walk away

Leafy getting angry with Firey 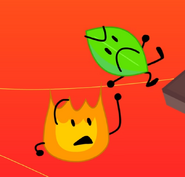 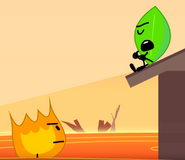 Leafy and Firey attempt to hug for the first time in the episode...

Add a photo to this gallery
Relationships
Retrieved from "https://battlefordreamisland.fandom.com/wiki/Firey_and_Leafy?oldid=2566221"
Community content is available under CC-BY-SA unless otherwise noted.