Battle for Dream Island Wiki
Register
Don't have an account?
Sign In
Advertisement
in: Characters, Non-Objects, Non-Contestants,
and 7 more

Green, grey
The fish monster is a species and a recurring hazard in BFDI. Fish monsters live in the Goiky Canal and Yoyleland, and seem to be omnivorous.

Fish monsters are big, green, snake-like monsters with a dorsal fin, sharp teeth, and multiple tongues that can efficiently trap victims. they can appear as either green or grey and also range between being huge or small. With the smaller fish appearing to be prey for the larger fish.

Fish monsters are mostly hostile, eating the contestants and each other when given the opportunity. However, they never seem to eat Pencil and will instead wrap their tongues around her for reasons unknown.

A fish monster first appeared in "Take the Plunge: Part 2". While Blocky was blocking his boat leak, a fish bites Blocky, causing him to shoot up in the air in pain. His team members watched in shock as the monster "eats" Blocky when he was falling down. However, in the next episode, it was revealed that the monster missed him and he fell behind the monster, creating an illusion that he was eaten. While Pencil was trying to get the supposed Blocky out of the fish monster, it wraps it's tongue around her, but didn't eat her, as it was distracted by Flower flying in the sky.

In "Hurtful!", multiple fish monsters are seen. It is shown that the larger fish will eat the smaller fish as a large grey fish eats a small green one, then Leafy.

A fish monster reappeared in "The Long-lost Yoyle City", bigger than last time, when Pencil was once again wrapped in it's tongue. Her team was forced to saw her in half to get her out. Later, Pencil kicked Rocky into the monster's jaws as revenge for barfing on her. In The Desert, Coiny attempts to hit the FreeSmart Van with a branch, however it missed and hit Rocky, causing him to fall into the monster. At the near end of the episode, Puffball dropped everyone on her team off of her, and they were devoured by the fish monster.

A fish monster appears in "How Loe Can You Grow?" in the form of a finger puppet. 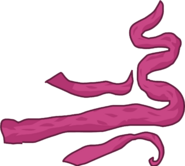