This article lists the interactions between Flower and Ruby.

At the start of BFB, Ruby was the first (and for a long time only) character who actively gave Flower a chance of friendship and hanged around her, as practically everyone else at the time disliked Flower because of how mean-spirited she used to be.

Flower and Ruby develop a very close friendship through the season of BFB, only having a minor conflict in BFB 14.

In "Zeeky Boogy Doog", Ruby revives Flower back from the dead, much to Pencil, Match, and Gelatin's dismay.

In "Getting Teardrop to Talk", Ruby calls Flower beautiful, which makes Flower want Ruby to be on her team later in the episode. When Flower forms the team, Ruby can be seen waving at her, implying that she doesn't have a problem with being on a team with Flower.

In "Lick Your Way to Freedom", Flower can be seen smiling at Ruby when she gets her cake.

In "Fortunate Ben", Flower pulls Ruby away from her game with Match because she was the only one who ever called her beautiful and she wants Ruby to convince her friends that she's pretty. Ruby then helps Flower look more beautiful by criticizing every position and movement she makes. Ruby also states that she hates the game "Flower Power" because Flower always wins, implying they've played the game together before.

In "The Liar Ball You Don't Want", Flower is seen under the jawbreaker that Ruby was on top of. They both also place jawbreaker pieces on Fries.

In "Get to the Top in 500 Steps", Ruby, along with Blocky and Yellow Face, gasps when Flower equips her Non-Slip Shoes So Ha.

In "What Do You Think of Roleplay?", Flower and Ruby are both seen sitting at a bench, angrily eyeing Foldy, implying that Flower told Ruby about how Foldy stopped her from winning in "Get to the Top in 500 Steps". They both sit together during Cake at Stake and later try to figure out who the impostor on their team is.

In "Let's Raid The Warehouse", Flower mentions how Ruby called her beautiful and once sang her a weird song, before getting to the point that Ruby was eliminated despite getting more votes in one episode than all of BFDI. Which helps her to realize she has to do the same to survive the Cake at Stake.

In "SOS (Save Our Show)", Ruby, along with everyone else, cheers when Flower and Gelatin save the show.

In "Chapter Complete", Ruby enthusiastically votes for Flower to win, telling her "You get it, fashion queen!" (once again implying her likeness for Flower's fashion). After Four returns, Flower approaches Bubble and Ruby, who waves at her and ask her what's up. Flower asks them if they want to help her eat the Grand Cake, to which both Bubble and Ruby happily agree. At the end, they both sit close together as they listen to Gelatin reading his comic.

In "Why Would You Do This on a Swingset", despite the two being friends, Ruby watches Lightning zap Flower with only little concern.

In "Return of the Rocket Ship", Flower asks Ruby if she's aware that the alliance is only made up of her and Bubble. Later when Ruby tells Flower to dig, Flower initially says no but later gives in.

In "Don't Dig Straight Down", when Ruby says the coordinates of the emeralds, Flower points out the correct direction to dig in. When Ruby senses Golf Ball's presence above them a second time, Flower says "Oh great." in response, possibly showing she doesn't hate Golf Ball as much as most of her teammates do. However, when Golf Ball intentionally blocks their next exit, Flower says they'll have to try somewhere else.

In "Take the Tower", when Flower mocks the Four-Colored Team for their poor throw attempts, Ruby tells her that she thought they both signed a truce on "the Insulting War of '19". Ruby also supplies her team with Flower petals that she got when she went shopping. This implies that Ruby likes Flower's fashion.

In "B.F.B. = Back From Beginning", Ruby and Flower exchange the twinkle of contagion off-screen in the sixth challenge.

In "Return of the Rocket Ship", Ruby along with the rest of iance, is horrified when Flower accidentally pops Bubble. Flower says it's no big deal and reminds them of the finale, which doesn't help.

In "Don't Dig Straight Down", Ruby is mad at Flower for killing Bubble in the previous episode. Flower states that Ruby shouldn't talk since she was about to impale two other teams. Ruby acknowledges that Flower is right but then says that Bubble's life is special and for killing her, Flower instantly loses Flower Power. Flower appears to be very shocked by this and tells Ruby not to say that again. 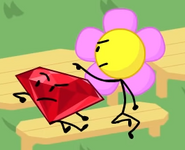 "Well, those two are real."

"You get it, fashion queen!"