Battle for Dream Island Wiki
Register
Don't have an account?
Sign In
Advertisement
in: Contestants, Characters, Females,
and 9 more
English

View source
watch 01:31
Who is Foldy?
Do you like this video?
Play Sound

BFB: "The Escape from Four"

Foldy is a female contestant in Battle for BFDI and The Power of Two who first appeared in "Getting Teardrop to Talk".

Foldy is a folded piece of blue-green paper. Her name is based on her appearance as an origami, which is created by folding a piece of a paper pentagon. She made her non-canonical debut in the joke video titled "BFDI APPISIOTE 225555555!!!!!", along with Liy, Stapy, and HelloKevin. She competed on the team Free Food until BFB 16 when she quit the show. Foldy is competing in TPOT for The Strongest Team on Earth.

Foldy appears to be an armless pale, light grayish turquoise and a grayish arctic blue piece of origami 3:4 paper with a grayish cerulean outline. She is the dodecahedron module on HTwins.net.

Foldy is typically a kind, passive character who is usually eager to participate in challenges and help others, such as Marker. She also seems to be fond of playing Rock Paper Scissors with Stapy and Marker. She is seen as more kind and calm than Stapy. It seems that she's easy to hold strong grudges against other people, notably Liy, and recently all of iance. The full extent of her vengeful nature is shown in "Get to the Top in 500 Steps", where she violently attacks Flower while the two are at the top of the 500-step staircase, wishing to make iance lose to avenge Stapy.

Foldy is a folded, aerodynamic piece of paper (shaped like a pentagon!) who can glide on currents of air. How does she do it? It's the magic of 3 × 4 dimensions and intricate folds (which Fries can't seem to grasp)! Despite her pleasant appearance, Foldy often holds on to grudges.

That said, Stapy is Foldy's best and dearest friend. Their bond might be stronger than any two characters in the show. They fight for and stand up for one another. So sweet!

Did You Know?: If you put 12 Foldys together, you get a dodecahedron.

In "Getting Teardrop to Talk", she appears talking to Tennis Ball, who is helping Golf Ball find Leafy. Foldy shows Tennis Ball where Leafy is (right in front of them) and Tennis Ball thanks her for the help. She later joins team Free Food, and invites Stapy along with her. In the challenge, she plays Rock Paper Scissors with him, until Fries tells them to stop. He then throws her in the air, in an attempt for her to grab one of X's baskets. However, she makes contact with the fan blades, and is shredded to pieces.

In "Lick Your Way to Freedom", Foldy is still dead, and Stapy and the other Free Food members want Four to recover her. Death P.A.C.T. saves her from one of the jawbreakers, where she is face to face with Liy, who tells her to go back to her own team with Stapy. When Foldy returns to her team, Stapy notices that she looks "totally steamed" and she explains this was because she saw Liy.

In "Why Would You Do This on a Swingset", Foldy is only briefly shown getting on her team swing.

In "Today's Very Special Episode", she is first seen playing Rock Paper Scissors with Stapy again, until Marker wants to play. When he says he doesn't know how to, Foldy says it was fine, and protests against Stapy saying that was lame. She explains to him that whoever passed the most gas wins, which Marker is confused by. While playing, Marker keeps making false moves, which she informs him are wrong. The fourth time Marker tries to make a move, his hand is in a shape of four, which worries Foldy, possibly because she knew Four would come out of Marker's hand. During the challenge, she is part of her team's makeover, which they call The Year's Hottest Look. This gets her team first place.

In "Fortunate Ben", she and Stapy make big smiles when Liy is eliminated. During the challenge, she and the rest of the team get stapled shut inside their plane by Stapy. They almost lose but win thanks to Stapy.

In "Four Goes Too Far", Foldy tells Four to stop screeching only to get mutilated. She is later recovered before Cake at Stake. During the challenge, she avoids looking at Pen while he has the Twinkle of Contagion.

In "The Liar Ball You Don't Want", she takes the Liar Ball from Balloony, and then gets ripped in half by Woody.

In "This Episode Is About Basketball", Stapy tells Puffball to save Foldy and Bell's cakes since they were both dead.

In "Enter the Exit", she is revived. Shortly after reuniting with her team, she asks where Stapy is. Using Camera, Eraser showed Foldy the footage of Match showing that Stapy cheated. Now knowing of this, she eyes Match angrily.

In "Get to the Top in 500 Steps", Foldy gets to the top of the 500-step staircase very quickly but does not press the buzzer. Flower reaches the top after her, but Foldy reveals that she is not pressing the buzzer because she wishes to avenge Stapy, who was eliminated thanks to iance in "This Episode Is About Basketball". In order to avenge him, she wants to make sure iance loses the challenge. Flower pushes Foldy off, but she floats back up and presses the buzzer, securing Free Food's safety.

In "What Do You Think of Roleplay?", Ruby unfolds Foldy as revenge for making iance lose last episode, and is seen throughout the challenge being folded up by Fries.

In "Return of the Rocket Ship", Foldy makes a couple background appearances and appears to be immobile due to Fries not being able to interlock her flaps.

In "Don't Dig Straight Down", Foldy, who somehow got properly folded, asks if the department store Yellow Face works for sells emeralds. He says that it doesn't but that they do sell cheap plastic toys that look like emeralds. Foldy attempts to turn them in, but is stopped by Fries, claiming that he thinks Four would not like to be cheated. However, when convinced by Marker to turn them in, they do. Foldy screams when Four becomes distorted as he compliments their forgery, but is unimpressed when he makes a joke about 'forgery' sounding similar to 'for Dream Island'. She cheers when Four declares their team safe.

In "The Four is Lava", Foldy is shown standing on Bell to avoid the lava. She jumps off so that Puffball could use Bell take care of Spongy's jet and then lands on Puffball to ride to Four. Along the way, Blocky attacks Puffball, knocking Foldy off in the process. Foldy glides back to kick Blocky off, but he uses his leg to swing around Puffball and pushes her off a second time. After Puffball gets rid of Blocky, she goes back to save Foldy before she falls in the lava. They make it back to Four and finish the contest, placing third.

In "The Escape from Four", Foldy is first shown walking with the other contestants to watch Four struggle at sucking up Spongy. Foldy starts pulling on Spongy to save the eliminated contestants when Stapy calls out to her. Foldy tries to save Stapy from retreating into Spongy's hole, but fails to reach him before he's pulled back in completely. Foldy gets upset with how she let this happen. She later quits BFB in favor of competing on TPOT.

In "X Marks the Spot", Foldy is in the crowd of characters who cheer when X is "glued" to the ground.

In "You Know Those Buttons Don't Do Anything, Right?", when Two says Tapy, Foldy gasps, so Basketball has to explain to her that Two said Tapy not Stapy, to her disappointment. When making teams, Bell asks Foldy if she wants to team up and she accepts, and they become their own team of two. Marker attempts to join Foldy but Bell flings him away. Later, Foldy and Bell join Basketball's team and become The Strongest Team on Earth.

During the challenge, the team initially planned on having Bell carry everyone to the roof of the building, but she doesn't come back down after her first trip. Eggy decides they should throw themselves up and suggests going with Foldy first. Foldy says she is one of the lightest contestants, but it is windy. Snowball ignores this and throws her, and the wind carries her off in the opposite direction of the building. After aimlessly floating in the air for while, Rocky barfs on her, which allows her to get back on the ground. She and Eggy meet up with Snowball and Basketball on the bottom floor and enter the elevator. They just barely beat Death P.A.C.T. Again and are safe. Foldy is last seen kicking Two when all of the contestants attack them for not explaining one of the rules clearly.

In "The Worst Day of Black Hole's Life", Foldy and Eggy don't have anything to do for the challenge since they can't help with stacking. When Eggy runs off to recover Teardrop, Foldy asks where she's going. Basketball later finds out that Eggy disappeared while she was in charge, and Foldy explains that she just ran off. Foldy and Basketball continue arguing against Eggy until times up. Foldy's team has zero blocks stacked so they're up for elimination. 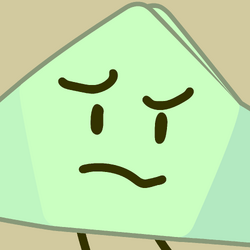