Battle for Dream Island Wiki
Register
Don't have an account?
Sign In
Advertisement
in: Articles with unsourced statements, Pages or sections out of order, Items,
and 4 more

"The Game Has Changed"

Forks are items that are seen in BFB first appearing in Getting Teardrop to Talk. They have a simple, two-dimensional, trident-shaped design and are mostly associated with Gelatin.

Remote owned one of these forks until Yellow Face stole it to help Gelatin and Puffball make a stack that was shaped like a Sierpinski triangle. Bell swung into the pile, destroying it and sending forks flying. The forks killed Bubble twice and another fork was jabbed into Teardrop, causing her to reflexively bite down painfully on Ice Cube's legs. The two forks remained intact after that.

In "Why Would You Do This on a Swingset", Gelatin throws forks at the Death P.A.C.T. members, landing on and killing Pie and Pen. Then Lollipop gives them her fork repellent, causing Gelatin's forks divert away from them and to accidentally stab Four, who then attacks Gelatin with his "Zappies", making him lose health. As mentioned above, Lollipop has a "Fork Repellent", which is a spray can that contains a type of liquid that makes people invulnerable entirely to forks, and reflecting them.

In "Today's Very Special Episode", the forks are circling around Liy due to the fork repellent, as it wasn't really working. Soon after, lots of forks fly towards Four. The Death P.A.C.T. members try to prevent it from happening, while Woody catches a fork that was almost about to hit Four. Later in the episode, Black Hole sucks the forks into him to get rid of them, relieving Pillow of her previous duty as a fork blocker.

Gelatin said that he would no longer be throwing forks after being in the Bottom Two during an elimination. So far, Gelatin has indeed not thrown any forks since then.

In "Four Goes Too Far", Stapy throws a fork at Four for mutilating Foldy, causing Four to shoot a laser at him.

In "Enter The Exit", Gelatin bends a fork to make the shape of Four in an attempt to bring him back. This fails.

In "What Do You Think of Roleplay?", Nickel used a fork in order to see if Woody was an impostor. Since Woody reacted in fear, Nickel deduced that he was real. However, Balloony mistook this as Nickel attempting to stab Woody, causing the two to fight. Ultimately, the fork is knocked into the air and pops Balloony.

In "A Taste of Space", Gelatin uses a fork to puncture a hole in the plastic wrap window so that he could stick his tongue out to "taste space".

In "Let's Raid The Warehouse", Gelatin sees a box of forks and throws a few of them. Gelatin wonders if Lollipop would like them, but Bubble deduces that she probably wouldn’t since she sells fork repellent and sprays herself with the stuff. They instead settle on getting Lollipop spoons.

In "The Game Has Changed", Teardrop decorates her party to Gelatin with forks, knowing he likes them.

The forks are the size of kitchen forks, but they only have 3 prongs. The shapes of the forks resemble pitchforks, and they appear to be extremely dark purple. 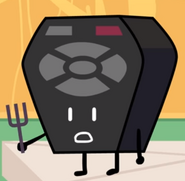 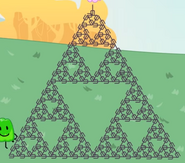 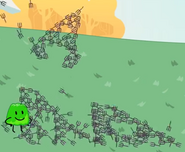 Fork stack after being destroyed by Bell 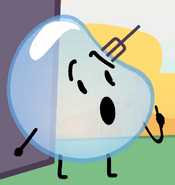 Bubble about to be popped by a fork 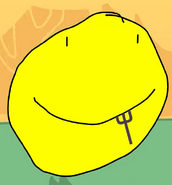 Yellow Face carrying a fork in his mouth 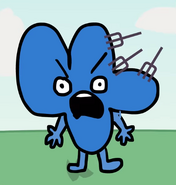 Four stabbed by Gelatin's forks. "Who did this?"

Liy surrounded by a ring of forks 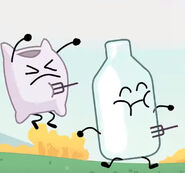 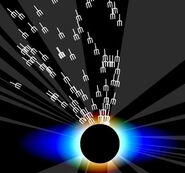 Black Hole sucking up all the forks

Death P.A.C.T being pummeled by forks

"That's not me! I'm not touching anything!" 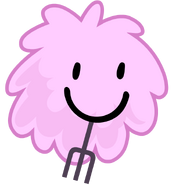 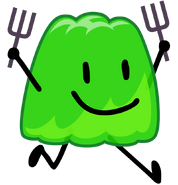 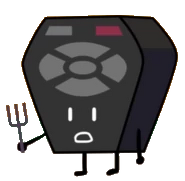 I don't have any seeds, but here is a fork. 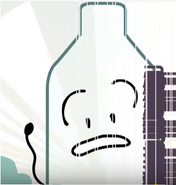 Bottle being hit by forks 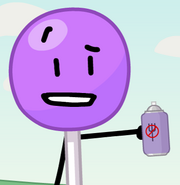