"X Finds Out His Value" (non-canonical)
"Getting Teardrop to Talk"

Four is a number and the main host of Battle for BFDI (now Battle for BFB). Four and his co-host X first appeared in the 2008 video "X Finds Out His Value".

Four exhibits very surreal mannerisms, including being able to deform or mutilate characters, revive them, screech to stun characters, eliminate contestants by sucking them into his body (sending them to the EXIT), and shoot energy beams (called "zappies") from his hands.

Four's first appearance in BFB was "Getting Teardrop to Talk", where he leads a game to win "a BFDI" (in which the winners will possibly get another Battle for Dream Island, now as "a BFB"). Four appears alongside X, another abstract being representing a real-life number, letter, or algebraic variable.

Four is a poorly drawn fourth numeral of the Arabic number system (the "open" version). He is mainly blue with his limbs being lighter colored. He also has white eyes with black pupils. However, as of "The Escape from Four", he is notably drawn much neater from the first episode despite that he may be drawn sloppily at times.

Although Four seems to be calm most of the time, he does get angry in "Lick Your Way to Freedom," "Why Would You Do This on a Swingset", "Fortunate Ben", and "Four Goes Too Far"; this anger is growing more frequent as the series goes on. Four was well-mannered in "X Finds Out His Value", however, and didn't screech. But in BFB, he has a mysterious, sadistic personality where he uses his powers to harm the contestants just for the fun of it.

In "Fortunate Ben", Four was shown to want a sense of dominance in the show and will get furious if talked back to or if he has tasks done for him. When provoked, Four would show no mercy and would even do things such as "dissemble" close friends out of anger, even lacking remorse in the process. In "Four Goes Too Far", Four is very intolerant to criticism as he mistaken Nickel's response to criticism and threatens to zap him, A Better Name Than That's plan being the only thing stopping the attack.

In "Enter the Exit", however, in direct contrast to the earlier bully he was shown as, Four seems to be a lot calmer, friendlier, and more humble than he was before he was multiplied by zero, possibly after how the contestants decided to revive him, despite all the pain he has brought them. He can still be violent, but noticeably less often. He had not screeched anyone for three episodes after his return, (breaking this streak in "Return of the Rocket Ship") adding onto how friendly he became, but will still not hesitate to zap those who bother him.

He also declared in "Return of the Rocket Ship" that he could not allow X to find his treasure because Four must be X's only treasure, signifying that he wants to be important to X.

"The Escape from Four" shows Four's personality in more depth as well as his possible motivations: he seems to be childish and acts like a control freak because he wants everyone to stay with him forever, explaining his narcissism and cruelty when hosting the show. Four tends to throw tantrums when things don't go his way, and hates being abandoned (possibly due to him losing his playthings) to the point where he begins to cry and refuses to let X console him since he thinks that he will abandon him too.

Four's first appearance was in a 2008 animation by jacknjellify called X Finds Out His Value along with X, where he helped X figure out his value by factoring out an equation.

Nine years later, Four and X appeared in Battle for BFDI as the hosts in " Getting Teardrop to Talk". Four first appears, grabbing Black Hole as he slowly begins crushing him in his fist, making him smaller. The objects are confused as to what he is, Liy tries squishing him. Four then mutilates Pin to show off what he can do. Four starts screeching the contestants until Dora says something to him that he understands. Pillow suddenly attacks Four but ends up dying in the process. Bell mourns Pin and Pillow being dead until Four shows that he can recover the dead.

Four then asks if the contestants want to play a game, presenting them with a chance to win A BFDI. Everyone unanimously cheers over the prize, so Four has then split into 8 teams of 8. When they are finished, Four tells them the first contest, which is to get X's baskets back to him. iance loses the contest and Four tells the viewers about the new form of voting with square brackets.

In "Lick Your Way to Freedom", Four begins Cake at Stake for iance and sucks Pencil up when she receives the most votes. Afterward, Four ends up crowded by contestants who want their dead teammates back. He angrily states that he'll recover only one person, who ends up being Tennis Ball. The contestants are still angry, so Four shouts that the contest is freeing their dead friends from jawbreakers. Once seven teams are safe, Four tells Beep that voters aren't safe, tricking them before saying they aren't safe.

In "Why Would You Do This on a Swingset", Four is hit by forks thrown by Gelatin and uses the Zappies on him, not completely killing, however, as X interrupts to him to start the intro. Four does so reluctantly. Four does "Brake at Flake" with Beep, giving Earths as cakes. Balloony reveals that he somehow knows about Eternal Algebra Class Withfour, which makes Four suspicious. Leafy ends up eliminated so Four sucks her up. Just as Four is about to announce the third contest, X arrives saying he's back. Four tells him nobody noticed he was gone, making X cry. Four then tells the contestants to get on their team swings and swing in circles 50 times to win. Team Ice Cube! loses the contest.

In "Today's Very Special Episode", Four asks Donut where his team is when he's the only one who showed up for Cake at Stake. Because Bracelety falls on Four's mouth, X hosts the Cake at Stake. Bracelety is eliminated so Four sucks her in through his mouth. Because it is the 4th episode, Four has the challenge be to make over him. Meanwhile, Death P.A.C.T. spends most of the challenge trying to keep forks from hitting Four, in order to avoid getting zapped. Four ranks Pen's drawing as the worst and has his team lose.

In "Fortunate Ben", Four has Death P.A.C.T. assemble for Cake at Stake. Liy ends up getting eliminated, but not before X shouts "Hi Pie, bye Liy", making Four angry enough to rip X's limbs off offscreen. Four is then shown screeching Lollipop and telling Book that X went to the Limb Reattachment Center. Four announces the contest, which is to avoid being the first team to have their plane hit the ground.

In "Four Goes Too Far", Four starts the episode by screeching Yellow Face, killing Foldy, and zapping Stapy. This gets the attention of A Better Name Than That, who decides something needs to be done about Four. Before Four can say who is eliminated, Nickel asks him a question that Four takes as criticism, and begins charging his hand to zap him. Four ends up getting multiplied by ABNTT and Zero, which makes him disappear.

In "The Liar Ball You Don't Want", Four is briefly mentioned by Blocky as asks Lollipop if she wants to see him coming at her at a million miles an hour.

In "Questions Answered", a recording of Four's screech is played on an audio recording.

In "Enter the Exit", Four's liquefied body is revealed to have been inside of Donut's body, which is sucked out through a syringe by Firey. Pin manages to squirt him out perfectly and is recovered. Four then gives her a token of gratitude. With Four back, he is able to revive the dead contestants and suck up the ones who were eliminated while he was gone, along with killing Clock offscreen. Four later shows up in the EXIT and announces that a contestant will rejoin.

In "Get to the Top in 500 Steps", Four hosts the first rejoin. Leafy gets the most votes, so Four stick his hand into the EXIT to grab her. He then places Leafy on The Losers!, in exchange for her gratitude token. Four then announces the 11th contest, after being reminded by X that there isn't a 10th contest. He gives the team's time to pick their runners and then starts the challenge. Four later recovers Pie so that she can continue running for her team.

In "What Do You Think of Roleplay?", Four and X switch bodies to fool the contestants. However, the contestants notice that they're acting differently, and their cover is blown when X recovers Bubble. Four then announces the contest.

In "Return of the Rocket Ship", Four reluctantly allows Ice Cube to watch Cake at Stake and tells the viewers to recommend a character. Four then proceeds with the Cake at Stake for Team Ice Cube. Later, Four and X are shown standing still for a while until X bursts through the ground. After eating Pillow, Four says the contest is to find X's treasure before X does. Four later eats the rest of Death P.A.C.T after Pen says that 5 is greater than 4. 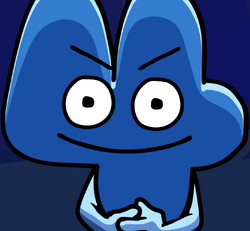 Retrieved from "https://battlefordreamisland.fandom.com/wiki/Four?oldid=2242922"
Community content is available under CC-BY-SA unless otherwise noted.