This page covers the relationship between Four and X.

Despite their conflicts, the majority of which were caused by Four, they are best friends in the series.

In one of jacknjellify's first videos, X Finds Out His Value, Four seems to be caring for X, as he helps him find his value, which happens to be 7.

They are the hosts in Battle for BFB, so their relationship is still on good terms. The first challenge shows that Four still cares for X, and X cooperates with Four during the eliminations. X and Four agree with practically everything during the show.

However, Four still harms or screeches at X occasionally. Four is often aggressive or harsh towards X, causing him to become injured or sad. Despite this, over the course of the show, Four's demeanor towards X has become more friendly, along with their overall relationship with each other.

In "Why Would You Do This on a Swingset", Four's behavior towards X is more mean-spirited. He sends X to the "Burn Center" and also makes him cry, stating no one noticed he was missing and reminds X that he only recently found his value.

In "Today's Very Special Episode", Four makes X fall and almost cries for making a translation mistake at Cake at Stake. Despite this, X still assists Four later on.

In "Fortunate Ben", Four gets mad at X for saying something he wanted to say. X tells Four to screech him so he can get it over with, but Four says he would do something "much worse." Off-screen, Four cuts one of X's legs off, and sends him to the "Limb Reattachment Center." X is seen at the end of the episode with his leg reattached with a bandage.

In "Four Goes Too Far", X corrects Four's mistake when he says the number of votes that episode. Four also allows X to recite the votes of some of Beep's team members. However, Four is quickly killed and he is merged into Donut, stopping them from interacting further. (However, X escaped at the last second out of fright, hiding in various places.)

In "This Episode Is About Basketball", X returns as Gelatin pulled him out of Fries. X may miss Four since he ran away before Four got multiplied by Zero.

It's shown that they have a healthy friendship in "Enter The Exit", despite all the things Four's done. X indeed misses Four and is very happy to see Four back. Four tells X that he did a good job hosting BFB, although he seemed angry at first.

In "Get to the Top in 500 Steps", X corrects Four by telling him it's the eleventh contest, and how Four has missed a lot. He helps Four by demonstrating the challenge.

In "What Do You Think of Roleplay?", X and Four switch bodies with each other. Near the beginning of the episode, they're seen laughing together, that they are sharing a funny conversation. Before the Cake at Stake started Four (disguised as X) leaned on X (disguised as Four), causing the disguised Four to slap the disguised X. Later, X hosts Cake at Stake. Four gets back at X for stealing his line in Fortunate Ben by stealing X's line and stating, "Now you know how it feels!" Later, Fanny tells the disguised X to recover Bubble, but X doesn't know what to do, so Four recovers Bubble for him. Fanny and Lightning notice that the two have switched bodies, so they shapeshift back into their normal selves.

In "Return of the Rocket Ship", when X asks if it wouldn't hurt to let Ice Cube watch Team Ice Cube!'s Cake at Stake, Four, in an annoying matter, agrees. when Four describes the challenge, he states that he can't let X find his treasure because he must be X's only treasure.

In "The Escape from Four", when Four is in pain from Firey Jr's fire, X tries to give him a juice box to make him feel better. X later appears with another juice box for Four, but Four assumes that X is going to switch to Two's show. X tries to explain himself but Four sadly tells him to just go, X not sure what to do ends up sticking with Two.

In "X Marks the Spot", Four is to upset to continue hosting the show due to not knowing where his co-host is. When Four learns from Taco and Firey that they know where X is, he perks up as they might able to get X back. In the stinger ending, Four hugs X and says he's so happy he's back. Four asks if X feels the same and X says it depends on how good he is at pattycake. Four calls himself super pro, so X is happy to be back as well.

In "Take the Tower", X reveals that Four promised to stop screeching after he screeches at Lollipop. When X starts the contest by saying "G-G-GO!", Four says "You really went for that for that one huh?", X just replies yes. At the ending of the challenge, Four and X speak at the same time while announcing how each team did, along with giving the teams their names.

In "How Loe Can You Grow?", Four acts a lot more sensitive to X. He's angry when Ruby's van has driven over X's aloe vera 73 times, reluctantly agrees to proceed with Cake at Stake when they wanted to tell the contestants to respect the more, and bases the challenge around helping his co-host out by making the plants grow. After Cake at Stake, Four reminds X when he's to do his snap thing to eliminate Spongy. When X begins to burn because of the sun, Four provides ice for the contestants to use to help him. Once the aloe vera has grown taller than Four, he claims all of X's problems are solved. X tells him they aren't as he's still on fire but Four is oblivious. In the stinger ending, X tells Four that there is still a problem, which Four still doesn't seem to get, but decides to make next episodes challenge, much to X's dismay.

In "A Taste of Space", Four's promise to extinguish X was proved into fruition where Four said that cooling down X will add points in the challenge while hurting him will reduce points. The two teams try to do things to X to increase their points, while sabotaging each other. Eventually the teams did things that would make them lose points, with both hosts subtracting them every time. In the stinger, Four compliments X on his garden, which was in fact, Flower standing on a pot. When she asks them how long will she stand in the pot, Four silenced her. X said that she could leave in about 2.5-3 weeks.

In "Let's Raid The Warehouse", Four tells X to quickly snap his fingers to eliminate Loser. When X says that he'll scan the receivers with his satisfaction detector, Four angrily tells him not to show off.

In "Who Stole Donut's Diary?", Four has the Have Nots watch over the prize so that he could help X untwist his nubs. X says that he would be the judge in the court case contest, but Four tells him that he's doing that. Later, X catches Firey returning the diary, and immediately reports back to Four to tell him. Four just scans X's brain, which X seems thrilled about, until he reminds Four to keep his secrets. X then rushes back to grab the diary and give it to Four.

Four walking to X in XFOHV

Four and X in the equation playground.

Four about to make X cry[BFB3]

Four and X standing together.

X receiving the basket, while Four announces that The Losers are safe.

X explaining why the Fourth Episode is special

X correcting Four after he said the incorrect number of votes

Four being interrupted by Clock

Four patting X on the head for doing BFB

Four and X laughing together 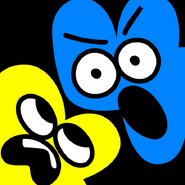 X and Four in the profile picture of jacknjellify

X tells Four that he promised him not to screech again.

Four and X saying the sentence at the same time. (BFB 18)

Add a photo to this gallery
Relationships
Retrieved from "https://battlefordreamisland.fandom.com/wiki/Four_and_X?oldid=2313327"
Community content is available under CC-BY-SA unless otherwise noted.