Frenemies
This article focuses on the interactions between Fries and Gelatin. Beginning in the first episode of Battle for Dream Island Again, Fries and Gelatin have had a unique relationship. While Fries is almost always annoyed by Gelatin's antics, Gelatin keeps coming back to Fries. Thus, it is unsure if Fries legitimately fully detests Gelatin, or if Fries just puts up with him to be in his company.

In "Yeah, Who? I Wanna Know", Fries, along with Gelatin, join Match's team.

In "Yeah, Who? I Wanna Know" and "Get Digging", Fries tells Gelatin to spin the wheel to choose the contest.

In "This Episode Is About Basketball", Gelatin tries to sneak some fries out of Fries by having Lightning carry him above him.

In "Insectophobe's Nightmare 3", Gelatin eats one of Fries' fries. Gelatin, disgusted, says that his fries tasted like they were over a year old. Fries yells at Gelatin and tells him that they are over a year old.

In "Get in the Van", Fries yells at Gelatin for pushing TB, GB, and Rocky off of Puffball because the latter didn't have enough space.

In "The Long-lost Yoyle City", Fries was mildly annoyed with Gelatin and Firey tying their legs together and falling off Puffball.

In "Welcome Back", it is revealed that Gelatin has eaten more of Fries' fries.

In "Questions Answered", Fries gets mad at Gelatin for calling his fries "swollen" and tells him to go eat someone else's innards after Gelatin says that he wants to eat his fries.

Fries angry, while Gelatin is not amused.

Gelatin eating one of Fries' fries

Gelatin is about to grab a fry.

However, he cowardly takes a step back. 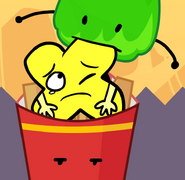 Gelatin biting X to take him out of Fries.
Community content is available under CC-BY-SA unless otherwise noted.
Advertisement