This article lists the interactions between Fries and Puffball. Puffball seems to be one of the very few characters that Fries genuinely enjoys being around.

In "Get in the Van", Fries tells Puffball to turn around to save the contestants Gelatin threw off.

In "No More Snow!", Fries wakes up realizing that he and Puffball are alone and asks her what happened to their team. Puffball tells him that Gelatin pushed Golf Ball, Tennis Ball, and Rocky off, which he already knew. Then she tells him that he fell asleep and says that Firey and Gelatin decided to tie their legs together and fall off. When they find Evil Leafy, Fries tells Puffball to follow her so they can get their teammates back, however they both only manage to get crushed to death by a weight.

In "Getting Teardrop to Talk", Fries convinces Puffball to join Yellow Face's team and she follows him.

In "Why Would You Do This on a Swingset", Fries tells Puffball to swing around fifty times instead of playing toss the dirt with Marker. It’s worth noting that when Fries got into Marker and Puffball’s conversation, she smiled.

In "Fortunate Ben", Fries quickly tells Four not to obliterate Puffball and to just disable her instead.

In "You Know Those Buttons Don't Do Anything, Right?", Fries joins Are You Okay since Puffball is on it. Later in the challenge, when Puffball uses Fries to catch the teammates of Are You Okay, instead of dropping him, she gently lands Fries onto the roof.

In "What Do You Think of Roleplay?", Fries says not now to who he thinks is Puffball when she makes a vomiting noise.

In "You Know Those Buttons Don't Do Anything, Right?", Puffball uses Fries to catch all the other teammates and put them on the top of the building, which stretches Fries immensely. Despite that, he does not seem to be hurt and does not mention it.

In "The Worst Day of Black Hole's Life", Fries and Puffball are mad at Golf Ball for using one block.

In "The Long-lost Yoyle City", Puffball was annoyed at Fries when he insulted the Davids just as they were almost out of Davidland. In the same episode, Puffball betrays and kills all of Team No-Name because she wants to win another prize.

Fries asks Four to disable Puffball instead of killing her.

Puffball and Fries joining Are You Okay 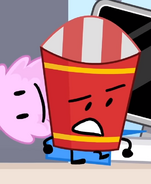