G and O are two characters that appeared exclusively in the first season of Battle for Dream Island. They are both green letters with tan limbs. Their eyes are two white balls with one black pupil in each eye. They appear as a form of saying "go", except as characters.

They are two multi-tone green letters with anthropomorphic qualities. They have two pupiled white eyes and lack mouths. They have tan limbs.

They made their debut in "Barriers and Pitfalls". A non-sentient G appears on the screen before Announcer interrupts it and says that the Squishy Cherries is missing Blocky and will lose the challenge automatically if they don't recover him. After Eraser and Pen shout Blocky's name, Announcer tells O to come over. O then appears on-screen nervously approaching G.

They made a reappearance in "Insectophobe's Nightmare" where after the Announcer tells that there are ropes to tie people up, he says go and G and O briefly appear for less than a second.

G and O as they appear in the storyboard of "Barriers and Pitfalls". 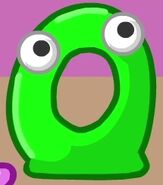 O's cameo in "Thanks for 600,000 subscribers!".
Add a photo to this gallery
Characters
Retrieved from "https://battlefordreamisland.fandom.com/wiki/G_and_O?oldid=2100491"
Community content is available under CC-BY-SA unless otherwise noted.