Best friends
This article lists the interactions between Gaty and Saw. The two have been shown to be very good friends since BFB began.

In "Getting Teardrop to Talk", Gaty and Saw were sitting together before Blocky grabs her by the handle to cut the pentagon in pieces. When the contestants begin to form teams, Gaty tells Saw to join her team. Saw agrees, and she joins Gaty's team, bringing Lollipop and Taco with her. Gaty later tells Saw and Taco that Book has burst into flames and that their team is in the bottom two, so Saw screams at them to swim faster through the lava.

In "Return of the Rocket Ship", Gaty is happy to have Saw finally return after being gone for so long. She also defends Saw from the accusations of Book.

In "The Four is Lava", as Saw expresses her worries about her team not being able to do Cake at Stake, Gaty nervously responds that if none of them leave the hole, none of them would be eliminated. When Saw tries to reason with her that it would be unfair to the other teams, Gaty yells that she doesn't want to be eliminated and begins sobbing, while Saw comforts her.

In "The Escape from Four", Saw can be seen standing with Gaty when Book is talking to Taco as she leaves. They both end up joining TPOT by the end of the episode.

In "You Know Those Buttons Don't Do Anything, Right?", Saw admits that she misses Lollipop and Taco, but Gaty reassures her that she's still here for her. The two end up being on the same team as each other. In the challenge, Saw has Donut hold her over the edge of the building. Gaty sees this and magnetizes her hinges to get pulled up to her, making their team safe.

In "Four Goes Too Far", Saw looks at earth, causing her to get the Twinkle. Gaty starts complaining that Saw got the Twinkle of Contagion. She accidentally looks at Saw and the twinkle gets transferred to her.

In "The Liar Ball You Don't Want", Gaty and Saw, along with Golf Ball, look down at Earth through a telescope on top of A Better Name Than That's broken ship and see that Taco has died.

In "The Four is Lava", Saw says that Dora wouldn’t be able to communicate with Four, Gaty attempts to tell her otherwise, but is interrupted by Lollipop.

In "You Know Those Buttons Don't Do Anything, Right?", when Saw accidentally names the team thanks to her fume condition, Gaty gives her an annoyed look. 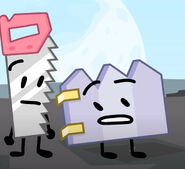 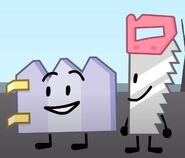 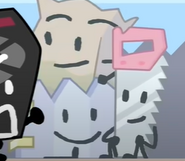