Battle for Dream Island Wiki
Register
Don't have an account?
Sign In
Advertisement
in: Places, Building, Season 2 places,
and 2 more

"The Four is Lava" (original)

Gelatin's Steakhouse is a chain of restaurants owned by Gelatin.

Gelatin's Steakhouse first appeared in "Get in the Van" when Leafy asked Bubble and Pin if they had any recommendations for where to eat. Bubble suggested it, but she added the fact that Gelatin was dead.

The steakhouse later appeared in "What Do You Think of Roleplay?" Several contestants, such as Blocky, Pen, Eraser, Flower, Ruby, and Spongy, were seated outside of the restaurant on picnic benches. Foldy and Marker were seen standing outside the restaurant though hard to see as only a part of them were shown. The steakhouse was the location for Cake at Stake, and the members of iance sat on the benches. When the recommended characters were shown, Gelatin grabbed the steak character Jordan, presumably for his steakhouse.

Gelatin's Steakhouse appeared as the location for Cake at Stake again in "Return of the Rocket Ship". Ice Cube can be seen walking past the steakhouse toward the benches, where the members of Team Ice Cube! sat. Black Hole can also be seen near the steakhouse when he explains that he just got Bomby a banana.

The lava destroyed Gelatin's Steakhouse in "The Four is Lava."

At the end of "Chapter Complete", it is shown that Gelatin has built a brand new steakhouse, in collaboration with Flower’s fashion line.

Gelatin's Steakhouse in BFDIA was very realistic, drawn in an art style completely different from the rest of BFDIA. It is a black building with a gray roof and a neon sign that reads "Gelatin's Steakhouse," which is next to a glowing picture of Gelatin smiling. The smile was replaced with a frown when Bubble said that Gelatin was dead.

In "What Do You Think of Roleplay?", the steakhouse changed drastically. It was redesigned to be visually in tune with the other buildings and structures of Battle for BFDI. The front of the building retains the green awning and Gelatin decoration, though it loses its neon lighting (which may just be turned off due to the scene taking place in daylight) and other details. The steakhouse also now has sets of yellow picnic benches which are often used for Cake at Stake. The steakhouse itself is also seemingly in a different location, being in an open field rather than adjacent to a road and other buildings. However, it could be possible that this is another location in a chain of Gelatin's Steakhouses.

After the lava was drained, there are burn marks around the lower part of the building.

The brand new steakhouse in "Chapter Complete" has two floors, with the first floor being colored beige and featuring a green and white awning with a black sign saying "Gelatin and Flower’s Steakhouse + Fashion Store: Grand Opening!", and brown windows and doors. The second floor is pink with blue windows, and features a dining table.

Gelatin's Steakhouse outside dining and aerial-back view of building exterior 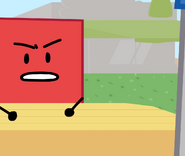 Gelatin is about to grab Jordan (a steak) possibly for his steakhouse.

Ice cube on the other side of the steakhouse

Gelatin Steakhouse without the logo

Death Pact near the steakhouse

The new steakhouse as seen in "Chapter Complete"
Locations
Community content is available under CC-BY-SA unless otherwise noted.
Advertisement