For the contestant in BFDI Mini, see Glue (character).

Glue is a sticky type of liquid that has made various appearances in BFDI. It can be made by mixing snow with gasoline. It seems to be very strong, as contestants have been trapped in the glue and unable to escape. There is more than one variety of glue, as when Blocky used glue in "Lick Your Way To Freedom" it was different in color to what had appeared in previous episodes.

In "Get in the Van", glue was formed in the FreeSmart Van because of all the FreeSmart members (except Pencil) having snowball fights in the van. The snow ended up in the gasoline tank, and as a result, it mixed with the gasoline and made glue. The glue began coming out of the tailpipe, leaving a trail of it behind the van.

It caused the HPRC to get stuck in Yoyleland by the parameters of Yoyle City. It also got Pin and Yellow Face stuck to a point where they were unable to move, and they had to die and be recovered to become unstuck.

In "Lick Your Way to Freedom", glue appears as white craft glue. Blocky was putting the glue on a piece of paper, until Grassy started talking to him. It is currently unknown what that piece of paper was for.

While glue doesn't directly appear in "Questions Answered", it is briefly mentioned by Saw after Donut asked the contestants what snow and gasoline makes.

In "X Marks the Spot", Coiny tried to use glue to stick X to the ground to prevent X from being taken by the Have Cots, but instead Coiny accidentally grabed Lollipop's orange paint she switched the glue with.

In "The Worst Day of Black Hole's Life", Coiny brings up glue once again, this time to help his team win the block stacking challenge. This upsets Pin, who believes that this is cheating, though Two later states that glue is fine.

The HPRC stuck in glue 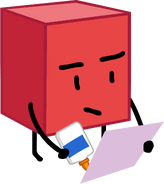 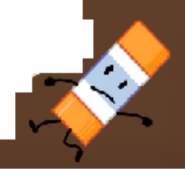