Goiky is a fictional continent on Earth[1] that is mainly a plain grassland area. It is where the Battle for Dream Island series started filming.

BFDI and BFDIA mostly took place in Goiky, until the contestants moved to Yoyleland during the competition and abandoned Goiky, Battle for BFDI and The Power of Two takes place in Northern Goiky.

There are 2 known sections of Goiky: the north area and the south area(s). The two areas are islands, with northern Goiky being the larger of the two.

The southern part of Goiky is generally a flat and plain area that generally lacks trees, and it rarely rains there. There are deserts, snowy forests, and deep canyons, (Evil Canyon) so it is arguably quite diverse in its' own. Season 1 and Season 2 of BFDI took place here.

Yoyleland is one of the regions in northern Goiky, having purple grass and yoyle bushes. An abandoned city named Yoyle City is in northern Goiky. Northern Goiky is also home to Yoyle Mountain, which is likely the tallest Mountain in Goiky. The rest of northern Goiky shown is mostly grasslands, however there are some yellow trees, although they were burnt up due to a leak of molten rock, but was restored by Two, although the color of the grass and trees were swapped. IDFB took place in North Goiky, and it is assumed that it is the same for Battle for BFDI/BFB and The Power of Two, as Yoyle Mountain was seen in the background in various episodes featuring the Hotel.

In the middle of the south part of Goiky is the Goiky Canal, which can be seen in "Take the Plunge: Part 1". The width of the canal is over 500 miles. The length is unknown likely to its few appearances.

Transportation in Goiky is limited. Due to a lack of demand and those who use it, there is a major lack of public transport, so those who must travel mainly use private vessels.

Goiky does not have a road network. The only known inhabited area, Yoyle City, does have a paved road network, presumably for motor vehicles, but it only links areas within the city and does not extend elsewhere. Those who wish to travel elsewhere must be willing to drive in off-road conditions.

Boats are occasionally used, with one notable instance being in "Take the Plunge: Part 2", where the challenge is to cross the Goiky Canal. The contestants built boats and successfully crossed the canal.

Aircraft has been occasionally used to travel. In "Don't Pierce My Flesh", Firey Speaker Box and Flower Speaker Box used a Spaceship to transport the contestants to the Volcano.

Golf Ball has built a Rocket Ship in "Four Goes Too Far" in order to travel to The Moon.

Spongy once owned a private jet to allow him to escape the Underground and go to Space.

Two railways are known to exist, with both of them connecting the Pillary Ruins to Yellow Face's Warehouse. The first, the express line, is a passenger service that is a two way trip, but was briefly considered disuse due to the High Speed Express Train, the only known locomotive used to run the line, being destroyed. However, in BFB 30, it was shown to have been repaired.

The second is a secondary line that uses a 0-6-0 steam engine to also go to Yellow Face's Warehouse. This line is considerably dangerous due to the implementation of several vertical loops that cause the passengers to fall out.

There are several methods of telecommunication used in Goiky, with some being more used than others.

Radio is established in Goiky, with radio signals being broadcast across Goiky. The first instance of radio is seen in "Sweet Tooth", where a narrator reads off a scientific report about Needle's Cake becoming a star. Radio is also used for advertising products. Radio could also be heard in Yoyleland, as seen in "Yeah, Who? I Wanna Know", as well as the Pillary Ruins in "How Loe Can You Grow?", where advertising and music services are provided respectively.

Television was assumed to not to be commonly used until "SOS (Save Our Show)". TV is shown to project images on him, but it is strongly implied that TV does it by himself and not by a signal.

A television playing an advertisement can be seen in "Insectophobe's Nightmare 2" in the No More Advertisements Foundation advertisement, where a Stick Figure can be seen regularly enjoying the TV, before being interrupted by an ad, upsetting them.

In "SOS (Save Our Show)", a TV station was found by Purple Face. The BFB contestants used it in order to fund the rest of Battle for BFB to prevent it from being cancelled, but ultimately failed; until Flower gave up her $50,000 bill.

Internet connections are shown to be established within Goiky, where tablets are used to connect to it. It is shown that the Big Rotating Building has an internet signal, where characters such as Ruby, Balloony, and Blocky use it to read articles, view advertisements, and watch videos. It appears that Woody also has internet access, as he was able to upload a prank video in "The Game Has Changed".

While members of the Have Cots are seen using an app store in "A Taste of Space" which requires an internet connection, it is possible that it was simply a trap by Four, as he appears after the Air app was a prank.

Goiky appears to have a wide variety of trees, bushes, and other plants.

Bushes are a slightly more uncommon type of plant. They made their debut in southern Goiky in "Don't Lose Your Marbles", where they made infrequent appearances in season 1. The most well known bushes are Yoylebushes, which grow Yoyleberries and are found exclusively in Yoyleland. Bushes are also shown to grow around the Bathrooms, with one being prominently featured in "Return of the Rocket Ship", where Book and Gaty hide behind one to chat about the former's treatment of Taco.

Grass is widespread and grows in nearly every biome of Goiky, with some exceptions such as The Desert. Grass can grow to be very tall, as seen in "Get Digging", where the grass around the Locker of Losers is shown to be very tall. Grass is shown to be different in color where it grows; in the Plains, it is lime green, around the Bathrooms, it is yellow (formerly a bluish green), and in Yoyleland, it is purple.

In Reveal Novum", seaweed is shown to grow in the seabed where the Tiny Loser Chamber landed after it bounced off of Bubble's Springy Shoes.

Prior to "BFDI Is Back", when it was confirmed that its name was Goiky[2], fans had assumed it was called Goiky due to the naming of the Goiky Canal, which the term "Goiky" seemed unique. However, the name of the Goiky Canal wasn't always the case, since in Total Firey Points, its original name was the Pamana Canal[sic][3], which is a corruption of the real-life canal, the Panama Canal. It has now been confirmed it is called Goiky by the book that Coiny retrieved.

The Goiky Canal is a canal featured in Battle for Dream Island. It is a landmark in the greater location of Goiky that is over 500 miles wide.

In Total Firey Points, it was called the Pamana Canal, which is a misspelling of a real-life location, the Panama Canal.

It was featured in "Take the Plunge: Part 2" when the teams had to cross over it in order to get to the finish line during the challenge.

In "Barriers and Pitfalls", Flower was seen flying over it.

During "Get Digging", in an attempt to go to Yoyleland to get Yoyleberries, Gelatin, Needle, and Puffball were crossing it on the way there. The Squishy Cherries' broken boat from "Take the Plunge: Part 2" and Woody's corpse appear floating in the water as cameos.

In "It's a Monster", the FreeSmarters went through the Goiky Canal by using the HPRC to recover dead members constantly and throwing the dead bodies out of the FreeSmart Supervan while an eerie soundtrack was playing in the background. The soundtrack sounded like a foghorn making noise in a deep ocean but it is actually a song that has been slowed down and low-pitched. They finished crossing in "The Long-lost Yoyle City". 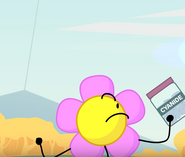 A description of the canal taken from Total Firey Points.

Leafy and Ice Cube get in a boat.

Flower flies through a lot of odd things over the Goiky Canal. 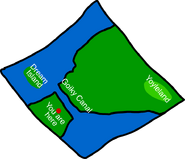