watch 01:29
Wiki Targeted (Entertainment)
Do you like this video?
Play Sound

This page lists the interactions between Golf Ball and Tennis Ball.

Throughout the series, Golf Ball and Tennis Ball maintain a friendship. Golf Ball usually pursues her own ideas and ventures, while Tennis Ball aids and abets.

Early in the series, characters such as Coiny would suggest and tease the two that they had a romantic relationship, but as the series passed its first episode, any allusions to such an idea quickly disappeared. However, the concept resurfaced in "Don't Dig Straight Down", when Tennis Ball thought that Golf Ball was flirting with him while iance was attempting to escape the lava.

In "Take the Plunge: Part 2", Tennis Ball, Needle, and Leafy choose Golf Ball to be on their team. Golf Ball agrees with Tennis Ball's idea to have Flower on their team. Coiny claims that they are in love, but Golf Ball says she likes Tennis Ball in a platonic way. He is shocked when Snowball pushes Golf Ball off a cliff.

In "Barriers and Pitfalls", they spend the entire episode running the course together.

In "Bridge Crossing", when Snowball threw Golf Ball down the gorge, along with knocking Needle, Ice Cube, and Leafy off the bridge, Tennis Ball comments that it was uncalled for.

In "Puzzling Mysteries", Tennis Ball says that fixing the puzzle should be easy to Golf Ball. Golf Ball agrees since there are only nine pieces.

In "Insectophobe's Nightmare", Tennis Ball chose Golf Ball for his team, saying that they are a duo.

In "Crybaby!", they work together to get their tub filled with tears. When Golf Ball manages to shed a single tear, they "low five" with their legs.

In "Half a Loaf is Better Than None", Tennis Ball cheers for Golf Ball in the bread loaf contest, even though she was doing a terrible job.

In "Yeah, Who? I Wanna Know", Tennis Ball tells Golf Ball one team should have the original contestants and the other should have the newbies. Golf Ball gets an uneasy expression on her face as he talks for some reason.

In "Get Digging", Tennis Ball says that he's the co-manager, while Golf Ball is the manager of the team.

In "Insectophobe's Nightmare 3", when Golf Ball gets poisoned, Tennis Ball seems rather amused by the fact that she looks like a miniature version of him.

In "Zeeky Boogy Doog", when everybody is recovering everybody with the HPRC, Tennis Ball chose to recover Golf Ball.

In "Get in the Van", Golf Ball and Tennis Ball agree that W.O.A.H. Bunch needs to stop stealing their team members. Tennis Ball then promises to never switch.

In "Welcome Back", they go to the science museum of Yoyle City. Tennis Ball knows Golf Ball so well that her wanting to leave the science museum for no apparent reason surprises him. They both later meet up with Coiny and Pin, discuss with them over how the wall teleporter works, and who should get to be freed first.

In "Lick Your Way to Freedom", Golf Ball demands that Tennis Ball does something when the team decides to make 8-Ball the new team leader. Tennis Ball claims he tried to stop them but they wouldn't listen.

In "Fortunate Ben", Golf Ball asks Tennis Ball how the steering is going for their plane, Tennis Ball tells her there is no steering and that they are just on a paper plane.

In "Four Goes Too Far", Golf Ball and Tennis Ball shift their eyebrows at each other over the fact that Four became a factor of Zero.

In "The Liar Ball You Don't Want", Tennis Ball and Golf Ball shift their eyebrows at each other again.

In "What Do You Think of Roleplay?", Golf Ball asks Tennis Ball what the first thing he took from the science museum was in order to see if he is the impostor on their team. Tennis Ball answers wall teleporter, but it doesn't get him off the hook since several other characters knew about the wall teleporter as well.

In "Don't Dig Straight Down", when Golf Ball asks Tennis Ball if it's getting hot around them, Tennis Ball starts to nervously stutter as he thought Golf Ball was flirting with him.

In "The Escape from Four", when Tennis Ball says that they shouldn't trust Two, Golf Ball agrees with him.

In "You Know Those Buttons Don't Do Anything, Right?", Tennis Ball asks Golf Ball if he can stick with her. Golf Ball says to Tennis Ball that, "Despite your grammatical error from earlier, you are a true friend and I appreciate your loyalty." and they team up. When Golf Ball panics over the team name, Tennis Ball asks "are you okay?", making Are You Okay their name. Golf Ball falls over after once again getting an accidental name, shocking Tennis Ball. Later, after Tennis Ball fixes the lava damage on his trebuchet, which Golf Ball is happy with and tells him great work.

In "Zeeky Boogy Doog", Golf Ball orders Tennis Ball to send Pencil to the incinerator. Tennis Ball follows through with what she said, but said "Fine" in a very bored manner.

In "You Know Those Buttons Don't Do Anything, Right?", Tennis Ball doesn't seem to like it when Golf Ball refers to some of the teammates as useless. Later in the contest, after Tennis Ball repairs the trebuchet. Golf Ball tells him he should use a lava proof material for next time. Tennis Ball replies with an "Okay", visibly annoyed.

In "Take the Plunge: Part 2", when Golf Ball attempts to tell her team her plan, Tennis Ball ignores her alongside the rest of the team, .

In "Lofty", Tennis Ball and Golf Ball argue about a ball-shaped cloud.

In "Yeah, Who? I Wanna Know", Golf Ball angrily asks Tennis Ball if he wants Dream Island when Tennis Ball asks if they are going to far with chasing Leafy. Tennis Ball confirms this in a slightly irritated manner.

In "It's a Monster", when Tennis Ball uses Fahrenheit, Golf Ball orders him not to ever use it over Celsius, to which Tennis Ball adheres sadly.

In "Why Would You Do This on a Swingset" and "Today's Very Special Episode", Tennis Ball was obeying 8-Ball instead of Golf Ball, which doesn't connect, as Tennis Ball said in "Lick Your Way to Freedom" that he had opposed 8-Ball's takeover. In the latter episode, Tennis Ball would try to prevent Golf Ball from drawing their Four make-over.

In "Return of the Rocket Ship", when Tennis Ball tries to aim for X's mind with the MMR, Golf Ball tells Tennis Ball not to disrespect X since he is their host and repeatedly names off what Tennis Ball shouldn't be thinking about X, much to his annoyance.

In "Don't Dig Straight Down", Tennis Ball gets annoyed by Golf Ball obsessing over stopping the underground team from coming to the surface. When Basketball asks him if this is what Golf Ball does for fun, he sighs and says that it is.

Tennis Ball and Golf ball tying their legs together

Tennis Ball and Golf Ball on the street

Tennis Ball and Golf Ball talking about the Wall Teleporter 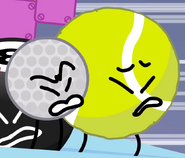 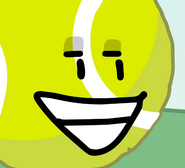 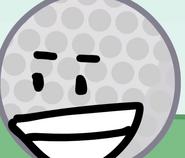 Tennis Ball thinks Golf Ball is attempting to flirt with him.

Add a photo to this gallery
Relationships
Retrieved from "https://battlefordreamisland.fandom.com/wiki/Golf_Ball_and_Tennis_Ball?oldid=2640851"
Community content is available under CC-BY-SA unless otherwise noted.