View source
watch 01:57
Who is Grassy?
Do you like this video?
Play Sound

Grassy is a male contestant in Battle for BFDI and The Power of Two.

He was one of the 30 recommended characters that could've joined Battle for Dream Island. Like Remote and Pie, Grassy only received seven votes, and placed 17th. He was flung into the Locker of Losers.

Grassy could've joined Battle for Dream Island Again, but he only got 53 votes and was sent to the Tiny Loser Chamber.

He had another chance to join in IDFB, but he only got 138 votes, tying with Cake.[1]

Grassy competed in Battle for BFDI on the team A Better Name Than That. He then quit to join Two's show in "The Escape from Four".

Grassy currently competes in The Power of Two on The Strongest Team on Earth.

Grassy appears to be comprised of blades of grass, and his body is lime green. His appearance has never been changed until BFB when he got a round bottom to make his design more connected.

Grassy appears to be quite childish and joyful, as he supposedly enjoys funny doings, much like Blocky. He usually talks in the third person point of view, often saying his name when referring to himself. He isn't afraid of sharing his feelings, like when he told Blocky that he wanted more respect from his team, mainly Golf Ball. He also considers himself to be useful. These facts seem to show that he has rather high self-esteem, but not quite to the point of being arrogant or egotistical. Grassy appears to have a difficult time talking, as he needed assistance from Basketball to say "respected" in "Lick Your Way to Freedom." Grassy appears to not be too good at challenges, usually not helping too much or messing things up. However, Grassy proves his usefulness in "The Worst Day of Black Hole's Life", which Snowball pointed out to the team.

When Grassy is excited, his blades wiggle. Grassy will often speak in the third person, and he likes to sit on people such as Basketball, Blocky, and Tennis Ball. When Grassy is standing in grass, he feels like he's standing in his hair. Grassy also feels tingly when he does photosynthesis.

Grassy knows to speak up when he's not getting the respect he deserves. Sometimes, it's difficult to find words for what he means, but Basketball helps him out with that! Grassy also enjoys words that rhyme with "respect," such as "protect."

Did You Know?: Grassy is not afraid of lawn mowers, which only give him a haircut.

In "Half a Loaf Is Better Than None", Grassy is one of the many recommended characters to jump into a vat of hydrochloric acid to retrieve the Announcer's marbles.

In "The Reveal", Grassy is one of the 30 recommended characters up for joining. His audition features him appearing from camouflage.

In "Reveal Novum", he receives seven votes, which is not enough, so he along with Remote and Pie are sent to the LOL.

In "Return of the Hang Glider", Grassy watches the final Cake at Stake from the bleachers with the other recommended characters.

In "Yeah, Who? I Wanna Know", Grassy only receives 53 votes to join the show, which isn't enough, so he gets flung to the TLC.

Grassy can be seen in the Evil Forest in "No More Snow!", along with 8-Ball and Bell, who also failed to join, implying they have escaped the Locker of Losers.

As of "Welcome Back", he has been returned to the LOL. He only appears on the voting card and is given a chance to join the show by getting voted out of the LOL.

In "Getting Teardrop to Talk", he and Basketball talk about how Loser is great. He is seen later when Black Hole slowly sucks up the objects.

Grassy complains to Basketball that no one picked him, so she picks him to be on Golf Ball's team. Once in, he announces that he wants to do "funny doings", which gets Blocky interested.

During the challenge, he asks Golf Ball what his purpose is, but she belittles him, calling him "an overgrown section of the lawn the gardener forgot to mow". When Blocky is knocked out of a tree, Grassy catches him in his blades, which Golf Ball calls surprisingly useful. Shortly after Golf Ball's death, 8-Ball names himself the temporary team leader, and Grassy says, "Why not Grassy?". 8-Ball's usage of the trebuchet brings A Better Name Than That immunity.

In "Lick Your Way to Freedom", he is first seen with Blocky, saying that his spot on the team needs more respect. He yells at Four to recover his dead teammates. When he has the chance to speak (cutting off Saw and Stapy), he asks Four to recover Tennis Ball. Since Grassy was the first to finish his sentence, Four recovers Tennis Ball. However, he is still yelling at Four after.

8-Ball chomps on a jawbreaker to free Golf Ball, and ABNTT is safe. Blocky shows sympathy for Grassy, reporting Golf Ball's lack of respect of him to her. Basketball then deems 8-Ball the team leader.

In "Why Would You Do This on a Swingset", Grassy, along with the rest of the team, follows what 8-Ball tells them to do, ignoring Golf Ball's commands.

In "Today's Very Special Episode", when he starts to draw, Golf Ball and 8-Ball start to argue in which direction Grassy should go. Later, Golf Ball nabs the marker from Grassy and starts to scribble. Despite this, ABNTT barely wins, placing 6th again and behind The Losers!.

In "Four Goes Too Far," Grassy starts the intro by holding his arm up while saying "Yeah!". He helps his team with multiplying Four and celebrates over their success. In the heart scene, Grassy gets the Twinkle once. He gets in Golf Ball's Rocket to go to the The Moon to avoid the twinkle. What his team doesn't know is that

is riding along with them.

With five minutes left, ABNTT and

have a stare-off, passing the Twinkle to one another. However, Taco gives the Twinkle to Bell, saving both teams, but the rocket breaks and they are left stranded on the Moon.

are still stuck on the Moon. He is seen looking at Pie flying away to the distance, and he comments that the situation back at Earth "seems chaotic".

He later turns on the rocket's communicator dish, connecting Robot Flower to Remote. After a while, the rocket suddenly shakes and becomes unstable. However, he "is here to protect" and nudges the rocket. This results in the connection being lost, giving Remote the ability to send a bomb to Robot Flower. If the bomb explodes, everyone on the Moon will die, so Robot Flower closes the connection between Remote and her, sacrificing a win for her teammates.

In "Questions Answered", after finding out Donut can transmit matter through his camera via TV, Basketball tells him to get them back to Earth that way, and Grassy agrees. When they do get back to Earth, Cake at Stake properly starts, with the team members sitting far away from Donut. He says they "don't have to sit so far", so Grassy goes into Donut's hole. Then, the rest of the team join him. Grassy is the 4th safe.

In "This Episode Is About Basketball", Grassy only appears in a crowd shot before Donut attempts to announce the next contest and when X constructs the challenge area off-screen.

In "Enter the Exit", Grassy only appears when Robot Flower shows her team that Remote was the one who sent them a bomb.

In "What Do You Think of Roleplay?", when Golf Ball asks him to prove he's himself, Grassy says "I'm Grassy", but that isn't convincing enough for her, which makes him frown. Meanwhile, "Basketball" says that this examination of A Better Name Than That's members would be quicker if Grassy "wasn't so basic". Blocky then points out Basketball as the impostor, making the team safe.

In "Return of the Rocket Ship", when Golf Ball states that she built an MMR, Grassy responds that he loves measles, mumps, and rubella (referring to three serious diseases), to which Fanny replies that she hates them. Later on, Tennis Ball, using the MMR to read X's mind, finds out what X's treasure is and where some of the emeralds are located. Grassy then repeats Tennis Ball's words by yelling them out loud for all the other teams to hear, despite TV's advice to keep it a secret, which results in Golf Ball giving Grassy a disgruntled look.

In "Don't Dig Straight Down", Grassy and his team wall-jump to the surface after finding the emerald. When Death P.A.C.T. takes the emerald and becomes safe, Grassy thinks it's no big deal. Later, Grassy agrees with Blocky that Golf Ball is stinky.

In "The Four is Lava", Grassy is recovered along with the other members of A Better Name Than That who died offscreen.

In "The Escape from Four", Grassy walks with the other contestants to watch Four struggle at sucking up Spongy. Grassy helps with trying to pull the eliminated contestants free of Four by pulling on Spongy's leg. He later switches to compete on The Power of Two.

In "X Marks the Spot", Grassy cheers when X gets supposedly glued to the ground so that they could have him continue being the host.

Battle For Dream Island: The Power of Two

In "You Know Those Buttons Don't Do Anything, Right?", Grassy agrees to form a team with Basketball and Robot Flower. In the challenge, Grassy rides on Bell to get to the top of the building and becomes upset upon hearing that Bell can't go back. The rest of his team just barely reaches the top before Black Hole and they win. Grassy kicks Two in the head repeatedly when everyone attacks them for not explaining the rules loudly.

In "The Worst Day of Black Hole's Life", Grassy is first seen walking to the elevator before Two starts the intro. Later, he asks Robot Flower what she thinks about him. During the challenge, Grassy rides on Bell in order to hand Snowball more blocks, while also making their stack more stable by evening the blocks. After Eraser knocks their stack down, Grassy attempts to start over but Eraser keeps kicking them away. Grassy and Snowball get back to making a new stack, only for Bell to knock it over with Team8s' glued stack of blocks. Once again, Grassy attempts to start from scratch with a single block, only for Teardrop to hit it out of the way just as time ran out. As a result, his team loses. As everyone sadly admits that they could've done better, Snowball credits Grassy for doing a good job, which makes Grassy happy. 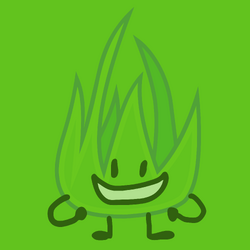