< Grassy
View source
watch 02:56
Doctor Strange in The Multiverse o Madness - The Loop
Do you like this video?
Play Sound

This article is about everyone's relationships and interactions with Grassy.

Grassy is very joyful and childish, he will usually get along with anyone as long as they don't bully or disrespect him.

In "Getting Teardrop to Talk", when 8-Ball states that he's in charge, Grassy asks "Why not Grassy?".

In "Why Would You Do This on a Swingset" and "Today's Very Special Episode", Grassy does what ever 8-Ball tells him to in challenges.

In "You Know Those Buttons Don't Do Anything, Right?", Grassy rides on Bell in order to get to the top of the building for the challenge. Grassy can be seen sitting on Bell when they're team is safe.

Grassy and Blocky became friends early in BFB starting with "Lick Your Way to Freedom", when Grassy tells Blocky that Golf Ball hasn't been treating him with respect. They are often seen near each other with Grassy sitting on Blocky's head.

In "Getting Teardrop to Talk", Grassy walks under a falling Blocky and has him land safely on his head.

In "Four Goes Too Far", while not seen on screen, Blocky holds onto Grassy when they crash into Four, which was later revealed in "This Episode Is About Basketball". While A Better Name Than That is celebrating Four's death, Grassy is seen floating above Blocky's head while Blocky is looking up at him; both of them have happy expressions on their faces.

In "What Do You Think of Roleplay?", Blocky appears to get defensive when "Basketball" accuses Grassy of being basic, showing that he may have been offended by the statement.

In "Don't Dig Straight Down", Grassy agrees with Blocky when he calls Golf Ball stinky.

Grassy catching Blocky after Robot Flower pushes him out of the tree in "Getting Teardrop To Talk".

Blocky promising that he will talk to Golf Ball about his spot on the team not being respected in "Lick Your Way To Freedom".

Blocky and Grassy smiling at each other during "Questions Answered".

Blocky protecting Grassy's head in "This Episode Is About Basketball" during X's flashback. 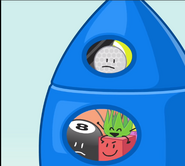 Grassy seen on Blocky's head when team ABNTT goes in Golf Ball's rocket to escape the twinkle in "Four Goes To Far".

In "Questions Answered", when Donut communicates to A Better Name Than That via TV, he reveals that he can use his camera to transport his arms to the moon. Basketball exclaims that he should bring them back down to Earth with it, and Grassy agrees. Later during Cake at Stake, Grassy is the first to jump into Donut's hole after he says that they don't have to sit so far.

In "Return of the Rocket Ship", Grassy mistakes MMR for measles, mumps, and rubella and claims he loves them. Fanny then appears to say that she hates those, making Grassy frown.

In "Lick Your Way to Freedom", Grassy yells at Four to recover his dead teammates, when Four states that he'll recover one person, Grassy tells him to bring back Tennis Ball.

In "Four Goes Too Far", he and the rest of his team multiply Four by zero.

In "Getting Teardrop to Talk", when Grassy said that their team will get up to lots of funny doings, Golf Ball says "We're not here to do funny things." In the same episode, Golf Ball insults Grassy, telling him that she thought he was an overgrown section of the lawn that the gardener forgot to mow. Later, Golf Ball praises him for saving Blocky's life and Grassy says that he's always useful.

In "Lick Your Way to Freedom", Grassy tells his team that he wants to be treated with respect, implying that Golf Ball was disrespecting him in the previous episode. When Four recovers Tennis Ball, like Grassy said, he continues to yell because Golf Ball is still dead.

In "Today's Very Special Episode", Grassy frowns when Golf Ball snatches a marker from him.

In "What Do You Think of Roleplay?", Golf Ball tells Grassy to prove that he isn't the impostor. In return Grassy says "I'm Grassy!", he becomes sad when Golf Ball wants to know how.

In "Don't Dig Straight Down", Grassy claims that he thinks Golf Ball is stinky when Blocky says she can't blame the grass for disliking her, confirming that their animosity is mutual.

In "The Liar Ball You Don't Want", Grassy can be seen sitting on Lollipop's head. Lollipop herself doesn't appear to have a problem with it.

In "Getting Teardrop to Talk", when Loser first appears, Grassy is seen smiling and shaking while everyone is cheering for him. When Basketball mentions that Loser is a great guy, Grassy says that he agrees.

In "Getting Teardrop to Talk", Grassy is horrified when Four mutilates Pin.

In "What Do You Think of Roleplay?", Puffball (in Basketball's body) calls Grassy "basic" when he slows down Golf Ball's investigation. This insult blows her cover, as Blocky points out that Basketball is friends with Grassy, and thus wouldn't insult him. Grassy himself doesn't seem to mind what she said about him.

Status: Enemies, on her side

In "The Liar Ball You Don't Want", Grassy helps his team mind control Remote into saving their team and Bleh from losing.

In "Enter the Exit", Robot Flower reveals to the team that Remote sent them a bomb.

In "You Know Those Buttons Don't Do Anything, Right?", he and Robot Flower are together before Basketball asks to team up with them.

In "You Know Those Buttons Don't Do Anything, Right?", Grassy seems to be very happy over the name Snowball picked for their team.

In "Lick Your Way to Freedom", Four says that he will only bring back one person. Grassy asks Four to bring Tennis Ball back, so Four does.

In "Questions Answered", Grassy sits on his head when the quiz show starts.

In the stinger ending of "Four Goes Too Far", Grassy can be seen facing TV with both of his hands in the air.

In "You Know Those Buttons Don't Do Anything, Right?", when Two doesn't allow Bell to go back down since it's against the rules, Grassy tells them that he's upset. When Remote, Tree, and Marker run pass the contestant on top of the building, Grassy can be seen making an upset face at Two. Grassy stomps on Two repeatedly because they didn't explain one of the rules clearly.

In "X Marks the Spot", Grassy cheers when X is dropped in 'glue' so that he could continue as the host.

In "Return of the Rocket Ship", Grassy unknowingly exposes that X's treasure are emeralds that are underground, along with their coordinates, to all of the contestants on the other teams.

In "The Escape from Four", Grassy assists in helping to free the Exitors from Four.

Just from looking at his teammates, Grassy happily assumes that they'll be sure to get off to a lot of funny doings.

In "Four Goes Too Far", Grassy and the rest of his team stand off against

on the moon, waiting for the contest to end with the twinkle on either of their teams.

In "The Liar Ball You Don't Want", they work together temporarily to save both of their teams while still on the moon.

In "Don't Dig Straight Down", when the members of Death P.A.C.T. with arms grab the emerald from A Better Name Than That, almost everyone on ABNTT accuses them of cheating, but Grassy thinks it's not a big deal.