Battle for Dream Island Wiki
Register
Don't have an account?
Sign In
Advertisement
in: Websites, Websites originally made by the BFDI crew, HTwins.net

HTwins.net (Huang Twins.net) is a website created by Michael and Cary Huang, the creators of Battle for Dream Island. It contains multiple games and features, including GTTTATINT (Get To The Top Although There Is No Top!), BFDIA 5b, Racing Extreme, Tidepool, Scale of the Universe 2, and other content, such as their early animations (eg. X Finds Out His Value) that were made before they started making Battle for Dream Island. The website was temporarily down for a few weeks in 2018, but Cary was able to get it back up on August of the same year.

These are the interactivites/games that used science and math.

Time Minesweeper is a game on the website that allows players to play Minesweeper and its many variants. Upon entering, players have to type their name.

Carelics is a collection of old HTwins games, in which they have been all relocated under this one title. The multiple games that can be found and played on Carelics are Icy Mountain, Z-Time, Chompster, Elemental, Elemental 2, Elemental 3, and Metasquares.

Elemental 3 is another game that was made by the Huang twins, based off the game Doodle God, and is the third version of Elemental. In this game, players mix so-called elements to create more of them, which users would suggest elements and create elements. There was a total of 8515 elements recorded before the game went offline to fix bugs, but when the game was active, it was known to have had about 10000. As of 8/18/2018, Elemental 3 is still offline due to millions of unexpected page refreshes and bad PHP programming.

Tidepool is a game inspired by the beginning stage of Spore. You start off as a small creature in a massive terrain with many different creatures. The objective is to eat the creatures that are smaller than you, while also avoiding the creatures which are still bigger than you or else you will shrink. There are a total of 100 levels and 4 creature sets.

The Scale of the Universe

The Scale of the Universe is an interactivity that shows objects of various sizes from quantum foam to the universe. There is a slider on the bottom to navigate to the objects of different sizes. The sizes range from 1×10^-35 to 9.3×10^26 meters. There is also a "wrong" version which has randomly generated sizes for all measurements and items.

The Scale of the Universe 2

The Scale of the Universe 2 is a sequel to The Scale of the Universe. It has more objects than the previous version, has more languages, and there are info boxes for each object that appear when the object is clicked. The interactivity also has new graphics, a larger screen, and buttons for toggling the sound and music and changing the language. This interactivity was once featured on two Vsauce[1] videos[2].

Edit the Text, as seen from its name, was a site made for editing a certain page with something that a person might want to edit.

Everyone was able to edit any page in Edit the Text, with the link htwins.net/edit, and the editors allowed users to add anything they wanted, like a paragraph or other things. This can be done by adding a string of up to 4059 characters after the "/edit" with another slash, like htwins.net/edit/test, to go to the page test, and they could have edited from there. (This already has been stated in the basic /edit paragraph) It was removed when the website went back up in August 2018, after a few years of service, which had a lot of things going on in Edit the Text in it's timeline.

Edit the Text was later recreated by Tikolu, a former user of Edit the Text, and is available to use on https://tikolu.net/edit. The site can be made to look exactly like the original by enabling "HTwins.net style" in the settings.

BFDIA 5b is a game (rather than an episode) made by HTwins. It takes place between 5a and 5c, and its purpose is to bridge the gap between the two episodes. It is based on FreeSmart's adventures inside Evil Leafy, with 53 playable levels in the game.

The purpose of Unicrush is to crush some normal characters in the keyboard (qwerty and so on) to some special characters counted as one character. (ⅲ, ƕ etc.) This is usually used for crushing down long messages (tweets, etc.) to a shorter message.

Upon clicking this on HTwins's site, it sends you to a video made by carykh; The Truth about 'Lefts, Rights and Wrongs. In that video, Cary Huang explains lefts, rights and wrongs. As been said, according to that video;

GTTTATINT, also known as Get to the Top Although There Is No Top!, is another game made by HTwins. This game is so far one of the largest and longest ones, having one hundred different gameplay variations.

Goime 500 is another game made by HTwins, and the player's goal is to have all the 500 achievements. The challenges are all simple and easy to obtain, such as trying to press WASD on the keyboard. Goime 500 has a very active speedrunning community.

This game involves moving a cube on a plane, trying to get a certain side to line up with the end square.

Racing Extreme is a game in which you have either 1 or 2 players racing using any of the 12 colored potato cars. There are five tracks where you can race on. There is also an "elimination rounds" mode in which its basically a series of random races in which the racer with least points is out.

No Walking, No Problem

This game involves a stick figure who lost the ability to walk. You can only move him by pressing space, which made him jump. Press the question marks to rotate to five different options. The stick figure dies when he touches spikes or lava. The final level involves a monster. The only way to beat him is to use the red pusher to bounce his fire ball back to him. After that you'll unlock the bronze medal which involves the stick figure learning to walk. If you beat 8+ levels with over 1000 points, you'll unlock the silver medal. It allows you to play a game which you need to click dots to win.

All About the Mandelbrot Set

This game tells you things about the Mandelbrot Set and shows images and zoom videos of it.

This game features 20 balls hanging over a rope. You can click the ropes to cut them. The balls will bounce for a while. The message written on the balls can be customized by going to https://htwins.net/ball?message.

This game involves colors and a switch. Mixing different colors creates a new color. Click on the switch to switch to dark mode.

This game simulate the state of rain in different temperatures. There are options to show temperatures, and change air, land, quality, disturbance and average temperature.

This game involves three minigames inside: "Balloon Bounce", "Hot Air Balloon Ride", and "KTPAFAYCKTPAF!" There are four difficulties in every game.

You need to keep as many balloons in the air as possible. Touching the spikes makes balloons pop and the game speeds up. Touching the green ball gains points. If the game is too fast, it ends.

You need to keep the Hot Air Balloon as long as possible. Going too high, too low, or touching gray balls ends the game. Touching rainbow balls give you points.

KTPAFAYCKTPAF stands for "Keep The People Alive Forever Although You Can't Keep The People Alive Forever!" There are three people in the sky and on the ground respectively. Balloons kill the people above and nails kill the people below. They can recover after a while. Green balloons give you points. If either side ran out of people, the game ends.

If you click on each letter, it shows 4 words which starts with that letter.

This game simulates air pressure. You can change the size of the box. Press the orange button or the blue button to increase or decrease air pressure.

A prototype of the website from June 2009 is available at http://htwins.net/new.

An unlisted page that has some swfs is located at https://htwins.net/misc.

Other pages on the site include: 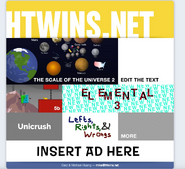 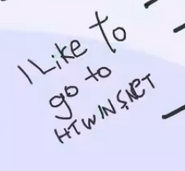