The Hang Glider is a device owned by Snowball and used by him and Firey throughout the first season.

It first appeared in "Take the Plunge: Part 1" when Snowball was using it. While flying, Snowball crashed into a mountain and left the hang glider there. (However, paper airplanes themselves have been referenced as early as a pre-BFDI comic from 2009, in which Leafy presents a $1,000 bill to Firey, which he proceeds to fold into one.)

In the appropriately named episode, "Return of the Hang Glider", Firey used it to save Leafy from being crushed by the Announcer Crusher.

It also makes a short cameo appearance in "No More Snow!" when Ruby and Book are being chased by Evil Leafy in the Evil Forest.

Snowball flying with the Hang Glider 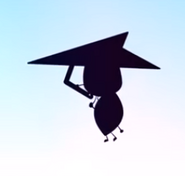 A silhouette of Firey and Leafy gliding off into the distance

The Hang Glider in the Evil Forest