Ian Woodside (born April 3, 2002) is an American YouTuber and voice actor. He's the current voice of Gelatin after taking over Graham Taylor after he left the show. He joined the show in "The Game Has Changed".

Regarding his role in "The Game Has Changed", Ian Woodside said he had to take a DIY approach as it was all last minute. [2] Cary Huang has said in his BFB 24 reaction that he likes to think that "the new voice represents a new flavor of gelatin".[3] 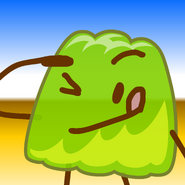