This article lists the interactions between Ice Cube and Pencil.

Ice Cube has always idolized Pencil's alliance with Match and Bubble but Pencil often wants nothing to do with her. Over time however, Ice Cube would grow to despise Pencil.

In Take the Plunge: Part 1", Pencil is irritated and bored of hearing Ice Cube ramble about her distaste for Flower, although as far as Ice Cube is concerned, she considers Pencil and Match to be her friends. She then tries to tell Ice Cube to stop squeezing Bubble. Later during the challenge, Pencil is annoyed when Ice Cube overhears that she's in an alliance and denies her request to join after they are knocked off the platform.

In "Take the Plunge/Part 2", Ice Cube thanks Leafy for picking her for her team since Pencil wouldn't let her in her alliance.

In "Insectophobe's Nightmare", When Ice Cube tells Leafy that Pencil wouldn't let her into her alliance, Pencil tells her that happened over a year ago and to let it go.

In "Vomitaco", Pencil wants to play catch with Bubble and Ice Cube but Ice Cube doesn't have arms to catch the ball with. Pencil tells Ice Cube that she's a good person but that Match is way better then her by a mile and even calls her garbage compared to Match. Pencil wants to make ice cream with Bubble. However, this resulted in Pencil grabbing Ice Cube, putting her on top of a cone, and then putting vomit and whip cream on her. After Bubble falls off her platform after tasting the "ice cream", Pencil has a taste as well, and comments on how terrible it tastes. She then throws Ice Cube into the vomit, making her lose the challenge.

In "The Reveal", Pencil partners up with Bubble over Ice Cube in the frisbee contest. Pencil attempts to explain why she can't partner with her but Ice Cube kicks her angrily.

In "The Glistening", Pencil votes Ice Cube to be eliminated.

In "Get Digging", Pencil and Match decide they don't want Ice Cube in their alliance after she makes an ugly face.

In "Get in the Van", while greeted at first by Bubble, Pencil steps in and comments how those "monstrosities" are not allowed at their party because they're only alternates. Despite this, Pencil allows her to join her new team.

In "Welcome Back", Pencil doesn't seem to care in the slightest about Ice Cube's sacrifice to save Woody and is more annoyed with how many of their dead members they have to recover. Later, Pencil recovers Ice Cube.

In "Getting Teardrop to Talk", when Pencil asks who their two other members should be, Book and Ice Cube cut ties with FreeSmart and join Gaty's team, this makes Pencil and Match scream.

In "You Know Those Buttons Don't Do Anything, Right?", when Two says they know how to use a pencil, Ice Cube becomes furious as she's reminded of her hatred for Pencil.

In "Insectophobe's Nightmare", when Pencil sees Ice Cube, she thinks that she's shrinking when she's actually falling down a cliff.

While indirect, Ice Cube allowed Pencil and many others to fall off a cliff in "Half a Loaf Is Better Than None".

In "Get Digging", Pencil warns the Puffball riders, which includes Ice Cube, to watch out for a wild Leafy.

In "Enter the Exit", Pencil doodled herself with her alliance members on her desk, however, the only members she didn't draw in were Ice Cube and Match.

In "The Long-lost Yoyle City", Ice Cube assists the team in sawing Pencil in half.

In "Welcome Back", Pencil acts completely indifferent to Ice Cube melting herself to save Woody and seems more annoyed over how they had to now recover both Bubble and Ice Cube.

In "Puzzling Mysteries", when Ice Cube is asked who she'd like to have join the Squashy Grapes she chooses Pencil.

In "Half a Loaf Is Better Than None", Ice Cube once again asks to join the alliance but Pencil actually lets her join due to Match being eliminated.

In "Bowling, Now with Explosions!", Pencil doesn't take off any points from Ice Cube and Bubble since they are in her alliance.

In "Insectophobe's Nightmare 3", Book and Ice Cube ask Pencil if they can be in her alliance. Pencil tells them they can be alternates. They both seem upset at the decision, but end up agreeing to it.

In "Welcome Back", Ice Cube runs down the Yoyle Needy stairs to try to save Pencil. 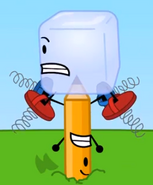 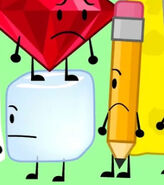