Income Tax Return Document is a recommended character and was up for voting in "You Know Those Buttons Don't Do Anything, Right?" to join Battle for Dream Island: The Power of Two. They were recommended by Sophie B. and first appeared in "Enter the Exit".

Income Tax Return Document also made a cameo in "Uprooting Everything".

They have shown being overbearing, threatening Two by stating they will have to make up for not having them debut. Income Tax Return Document is also very quick with their actions, as they observe Pin poking through the wall of the hotel and then notice Needle coming in next. Though, they immediately dodged it by folding up.

In "Uprooting Everything", Income Tax Return Document is sitting in a room when Pin's sharp end suddenly breaks through the wall. They try to get take a closer look and duck before they are stabbed by Needle, who reveals the release date for TPOT 1.

Income Tax Return Document is later told that they didn't get enough votes to join, along with VHSy, Salt Lamp, and PDA. Before they're sent falling through the floor, they swear that Two will pay. They can later be seen in one of the rooms with Rubber Spatula as Two and the contestants use the elevator. 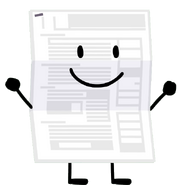 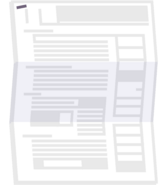 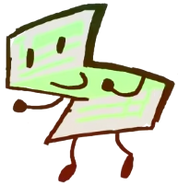 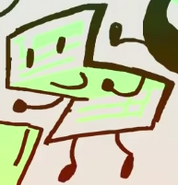