Joeart M. (Joe Art Maker)
Kitchen Sink is a recommended character and was up for voting in "You Know Those Buttons Don't Do Anything, Right?" to join Battle for Dream Island: The Power of Two. They were recommended by "Joeart M.".

Kitchen Sink is a porcelain sink with golden-colored taps.

Kitchen Sink likes to impress, as shown in their audition tape when they seem to try and show off by launching their water a long distance. Other than that they seem to go with the flow, doing whatever’s big at the moment.

Kitchen Sink made their debut in "The Four is Lava", where they are one of the various recommended characters who appear when Dora and Saw swim out of the lava.

In "The Escape from Four", Kitchen Sink was one of the 26 recommended characters selected by Two to become a contestant in Battle for Dream Island: The Power of Two. In their audition. They are turning one of their taps, which is rapidly spouting water. Kitchen Sink appears to be focused on doing such.

In "You Know Those Buttons Don't Do Anything, Right?", Kitchen Sink is seen with their fellow eligible debuters at the ground when Two flies up to the top of the Bathrooms. Due to being high up, the contestants cannot hear Two's calls to do Cake at Stake. After Nickel fails to hear their calls, Two uses their telekinesis to bring the contestants and the eligible debuters up.

Following Shampoo's elimination, Two announces that Kitchen Sink, Scissors, and Snare Drum were eliminated, with Kitchen Sink receiving 349 votes. Kitchen Sink is sent down unceremoniously. Kitchen Sink can later be seen inside the hotel barely behind a houseplant. 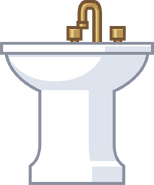 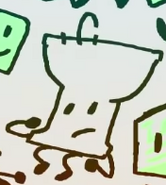 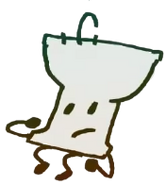