Battle for Dream Island Wiki
Register
Don't have an account?
Sign In
Advertisement
in: Stubs, Articles proposed for merging, Items,
and 7 more

"Half a Loaf Is Better Than None" (as Arm Cutter)

Knives are recurring items in the BFDI series. They were used during Cake at Stake in "The Reveal", but are most notably used by Leafy while she was in Yoyleland. Eraser used the Knife once, however the knife said "Arm Cutter", as Eraser wanted bonus points as well.

Knives used during Cake at Stake.

Spongy shows that he's a damage-sponge. 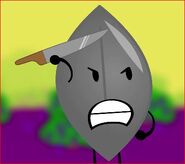 Pin with a knife.

"Don't even think about it, Eraser."