This article lists the interactions between Leafy and Needle. Leafy and Needle have an odd relationship in BFDI. Leafy was constantly slapped by her, yet they stayed friends for most of the time. After being enemies with each other in BFDIA, and not interacting in IDFB, the two are now on slightly better terms in BFB.

In "Take the Plunge: Part 2", Leafy happily yells Needle's name when she wants her to join her team. When Snowball is angry at Needle, Leafy splits the two up before anything bad can happen.

In "Barriers and Pitfalls", when Ice Cube says that Needle is such a fast runner, Leafy says that's good, considering she's on their team.

In "Are You Smarter Than a Snowball?", Leafy asks Needle if she thinks that non-existent Icy is mad at her, and Needle says no.

In "Sweet Tooth", they both watch the Announcer from behind a bush. Leafy talks about wanting to actually know what the "Speaker Thing" was, but Needle isn't interested in finding out. In the stinger ending, they both watch Needle's Cake grow in the sky.

In "Bridge Crossing", during the contest, they try to cross the bridge with Ice Cube but are knocked off by Golf Ball, thrown by Snowball.

In "Get to the Top in 500 Steps", Leafy rejoins BFB and is placed on Needle's team. Considering their last known interaction was the two trying to kill each other in BFDIA 2, Needle acts awkward towards her being on their team at first. Leafy, eager to befriend her new teammates, gives Needle a cake, much to her delight. When Needle wins first place for the team, Leafy congratulates her.

In "The Four is Lava", when Leafy gets blown away after being slapped by Needle, the latter is shocked.

In "Take the Plunge: Part 1", when Leafy and Pin decide to help each other, Needle has a surprised/concerned look on her face for an unknown reason.

In "Are You Smarter Than a Snowball?", "Sweet Tooth", and "Bridge Crossing", Needle slaps Leafy for calling her Needy several times. In the latter episode, Leafy gets fed up with the slapping and slaps her back but accidentally causes her to fly in the windstorm.

In "Return of the Hang Glider", Needle didn't want to vote Leafy to win, possibly because of how much she's had to slap her over her name. Needle was likely happy about Leafy getting the death penalty for stealing Dream Island.

In "Get Digging", Needle slaps Leafy for saying "needy", even though Leafy wasn't calling her the name and just happened to use the word in a sentence. Leafy angrily throws knives at both her and Gelatin. Needle tries to kill Leafy with some acid spitballs, but Leafy dodges every shot. Angered, Leafy throws more knives at a faster pace.

In "The Four is Lava", when Leafy tries to interject on Taco and Ice Cube's conversation, Needle slaps her and tells her to mind her own business. Later, during the challenge and when Leafy and Firey are arguing, Needle grows infuriated with it and tells Leafy to just do the challenge, as well as pushing her off of the bathroom roof. Leafy herself is surprised by Needle's sudden outburst. In the stinger ending, Needle talks about Leafy with Eggy and Firey and gives Leafy an angry look when she reveals to Clock that they are in episode fifteen. 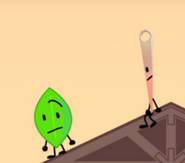 Sitting on the roof 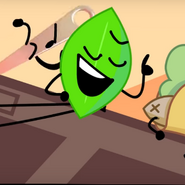 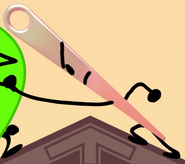 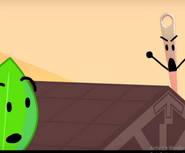 "SHUT UP!"
Relationships
Community content is available under CC-BY-SA unless otherwise noted.
Advertisement