Battle for Dream Island Wiki
Register
Don't have an account?
Sign In
Advertisement
in: Recommended Characters, Appeared on BFDIA 5b, Characters,
and 5 more

View source
watch 01:39
Who is Lego Brick?
Do you like this video?
Play Sound

1st (Get Digging, as a recommended character)

He is known for his very happy smile. Due to his shape and color, Book initially thought Lego Brick was an armless and mutated version of Blocky.

Lego Brick seemed nice before Book killed him. After his death, he was extremely annoyed and angry at Match and Book for killing him. According to Waffle, he is generally passive, but he has a fear of dying, so he will be defensive in the cases he may die.

Lego Brick is part of the crowd of recommended characters in "Vomitaco."

Lego Brick once again appears as a recommended character in "Bowling, Now with Explosions!." He was set ablaze in the epilogue.

Lego Brick appears in "Get Digging" as the top-rated recommended character for that episode.

In BFDIA 5b, Book who was trying to pass level 32, killed him. As revenge, he traps Book and Match behind a wall he claims to have rented for a week (level 33). Then, he traps them in his dungeon/factory. Ice Cube is also found in the factory for an unknown reason (level 42). However, Match, Ice Cube, and Book escape the factory. Later, they meet Waffle, who informs them that Lego Brick was a nice guy, but has a fear of dying.

In BFDIA 5b, when Book encounters Lego Brick, she calls his appearance horrific. Then, Lego Brick offers to be friends. In the next room, Book needs him for something, which involves killing him and trapping him in a box, the former being a huge fear of his. As revenge, Lego Brick drops Book and Match into his underground factory. Later, Waffle explains Lego Brick's fear of dying to Book. 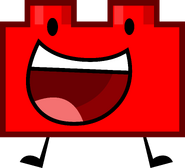 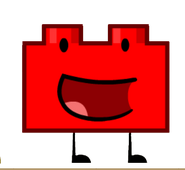 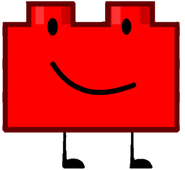 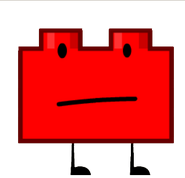 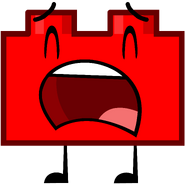 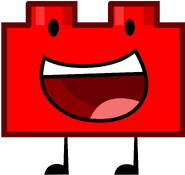 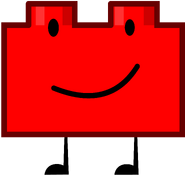 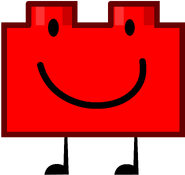 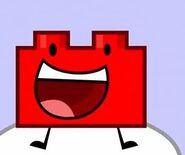 Lego Brick Tower in BFDIA 5b

Lego Brick's cameo in Lo-Fi Beats to Yoyle To