Battle for Dream Island Wiki
Register
Don't have an account?
Sign In
Advertisement
in: Items, Season 4 items, Challenges,
and 3 more

The 7th challenge, Loser (inside), the tower that was built in attempt to escape the EXIT

The Liar Ball was an item that is used for the challenge in "The Liar Ball You Don't Want" and to eliminate Loser.

It is a jawbreaker that Donut turned inside out, with Loser inside of it due to his elimination. It is nicknamed the "Liar Ball", as Loser "lied" to the other contestants earlier in the episode, as well as the name of the episode being "The Liar Ball You Don't Want".

In "The Liar Ball You Don't Want", Loser was stuffed inside the ball, and was left on the ground until the contestants started moving the ball around in order to get rid of it. It gave Donut a good idea for the episode's challenge.

After some disastrous pushing, observations from the moon, and hacking, the ball landed in A Better Name Than That's hole. After that, Remote blew up, launching the Liar Ball into the endless void of space.

In "Questions Answered", due to Donut's camera being lost in space, the Liar Ball was seen on TV's screen when A Better Name Than That was inside Donut's mouth.

In "Enter the Exit", Loser was reading Donut's Diary in the liar ball, when Four came to space and took the Liar Ball and sucked it inside him.

In "The Escape From Four", Loser breaks out of the Liar Ball after reading Donut's Diary and becoming bored. He greets the rest of the contestants in EXIT.

However in "B.F.B. = Back From Beginning" Loser is seen once again in the Liar Ball, remarking that it's "Cold and Lonely" as he is once again thrown into a hole to finish the challenge.

In "SOS (Save Our Show)" Loser has exited the Liar Ball again.

Loser coming out of a Jawbreaker before Donut made it inside out.

Bell and Spongy screaming after Taco gets crushed by the liar ball.

Stapy pops Balloony and is stealing the liar ball to let Foldy get it.

Foldy about to be killed by Woody. This marks Woody's first kill ever.

Bell is about to hit Woody. 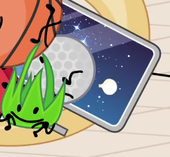 The Liar Ball on TV's screen 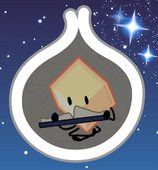 The Liar Ball in EXIT

The moment Loser bursts out of the Liar Ball

Inside of the liar ball 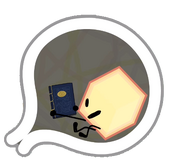 Loser in the Liar Ball with Donut's Diary
Items
Community content is available under CC-BY-SA unless otherwise noted.
Advertisement