View source
watch 01:48
Who is Lightning?
Do you like this video?
Play Sound

Lightning is a male contestant on Battle for BFDI and The Power of Two. He was a recommended character that could have joined Battle for Dream Island Again, but with only 93 votes, he did not have enough votes to join and was flung to the Tiny Loser Chamber.

Lightning later appeared in "No More Snow!", along with Cloudy. He struck a tree, made it fall over, and crushed Pin, killing her.

Lightning had a chance to join IDFB, but he failed to join with 65 votes.[1]

He then became a contestant in BFB and was a member of iance.

Lightning appears to be a lightning bolt, which is a form of plasma. The outline is olive, and the inside is bright yellow.

Lightning is a feisty character who enjoys zapping people, but only people in particular, such as Flower. He used to affiliate with rude and other killers such as Snowball. He seems to take orders from others when it comes to who he is supposed to zap. He also appears to require clarification of the challenges, although he hasn't asked for this since "Why Would You Do This on a Swingset".

Similarly to Ice Cube, Lighting often seems to seek validation with others and hates being left out as he tried befriending Marker and Stapy in "Getting Teardrop to Talk" only to be told no, felt insulted when his teammates took so long to notice he was replaced in "What Do You Think of Roleplay?", and felt left out when some contestants bonded over having zigzags in "You Know Those Buttons Don't Do Anything, Right?".

Lightning also feels remorse for his own actions, making him a little more friendly despite zapping people numerously.

Lightning also seems to be nosy and curious, such as in "Don't Dig Straight Down" where he questions why his team has so many nicknames for Golf Ball, or in the same episode where he doubts that he and the rest of his team will find another emerald.

Lightning isn't supposed to strike the same place twice, but don't tell that to Lightning. He loves to zap people—especially Flower! In fact, he'll zap her over and over again. This might make him seem mean, but he's just following orders to please others.

Did You Know?: Due to his luminescence, Lightning has never witnessed darkness and is confused when others claim they are scared of it.

Lightning first appears in "The Reveal" as "Bolty", striking when Announcer mentions the penalty and later forming from Cloudy in his debut audition. Lightning himself here is not actually up to debut.

In "Return of the Hang Glider", Lightning, along with every other recommended character of the season, appears in the stands.

In "Yeah, Who? I Wanna Know", Lightning fails to join the season's roster, receiving only 93 votes. Lightning is thus flung to the Locker of Losers.

In "No More Snow!", Lightning makes a cameo appearance where he forms from Cloudy and strikes a tree, which falls on and kills Pin.

In "Welcome Back", Lightning is given a chance to join the show by getting voted out of the TLC.

In "Getting Teardrop to Talk", Lightning is utilized by Pencil for the purpose of electrifying the alliance's enemies, the target at the time being Spongy. Match attempts to get Lightning to electrocute Flower, but he is dissuaded by Bubble and, speaking for the first time, renounces Match and Pencil as maniacs. He would later ask if he could befriend Marker and Stapy, to which the former denies. This prompts Lightning to then electrocute Flower.

As teams are being formed, Snowball chooses Lightning based on his admission of reportedly killing dozens of people, a fact that causes Snowball to view him as powerful. Later on, Lightning advises Snowball to also take in Fanny for her "murderous attitude". As Snowball argues with himself, Lightning slowly drifts upwards. Lightning's group merges with Pencil's group as Flower brings them together to form iance. Lightning zaps Flower once more after she requested to be observed. Lightning also details the pronunciation of their team.

Lightning generally inquires if Four's challenge was the first challenge of BFB, in order to clarify. Snowball concurs. Throughout the challenge, Lightning, with the rest of his team, simply "jumps" to attempt to reach a basket. However, after Fanny lambastes jumping, Pencil orders Lightning to zap her. Lightning is almost stopped by Bubble, but Pencil intimidates her, and Lightning goes ahead and zaps Fanny, much to Bubble's dismay. Lightning goes back to jumping, but his team's efforts ultimately fail, and iance goes up for elimination.

In "Lick Your Way to Freedom", Lightning receives 532 votes towards elimination at Cake at Stake, the third lowest amount of votes on iance, making him safe. Hearkening back to the previous episode, Lightning asks Snowball to clarify the contest's objective. As with the rest of his team, Lightning licks the jawbreaker and rescues Ice Cube, making iance safe.

In "Why Would You Do This on a Swingset", Lightning attempts to ask a clarifying question, but Flower immediately shuts him down. This prompts Lightning to once again zap Flower. iance would proceed to utilize Fanny's mechanisms to accelerate their swing, making them safe.

In "Today's Very Special Episode", Bell asks Lightning to zap her, to his surprise, to send the electricity up her string and shock off the climbers. Clock describes this as "the biggest zap-tation" he's ever seen.

In "Fortunate Ben", Lightning attempts to soar his team's plane over the other teams and Snowball compliments him. However, this causes Four to get upset since he is flying, so he obliterates Lightning and Black Hole.

In "Four Goes Too Far", Lightning is recovered by Four.

In "The Liar Ball You Don't Want", Lightning is seen gleefully playing with the newly invented poppers. During the prelude to the elimination, Lightning pulls out Camera to take a picture of Donut hosting his first Cake at Stake. However, Lightning initially zooms in too far into Donut's hole, stoking momentary worry from Marker until Lightning zooms out farther. During the challenge, Lightning explains to Bubble the reason for everyone's murderous mania being attributed to the balance Loser brought being lost. He then zaps the Liar Ball, sending Pie flying past the horizon.

In "This Episode Is About Basketball", Lightning dangles Gelatin over Fries in an attempt to snatch one of his fries. Instead, when Gelatin panics, he pulls out X.

In "Get to the Top in 500 Steps", Lightning fearfully nods in compliance with Four's prohibition against flying. He then unceremoniously agrees to Flower doing the challenge. When Flower is later knocked off the stairs by Dora, Lightning manages to safely catch Flower. Still, Pie presses the buzzer, saving Death P.A.C.T. and putting iance up for elimination.

In "What Do You Think of Roleplay?", Lightning is suspicious about Four's and X's behavior before the Cake at Stake ceremony begins. He is the second one safe, with 804 votes. Lightning is one of the contestants meddled with, being impersonated by Spongy and impersonating Pin. As Pin, his cover is easily blown by Needle when he laments over her strange ailment, accidentally contradicting the fact that the real Pin was there when it happened to Needle. Fanny would later uncover the faux Lightning when she notices him flying around the room freely. Fanny points out that Lightning often forgets that he can fly, thus unmasking Spongy as the impostor. iance barely misses elimination and places second-to-last.

In "Return of the Rocket Ship", Ruby asks Lightning, referring to him as "Thunder", if he wants to dig. After a small dispute about Ruby's nickname, Lightning starts digging a hole in which the rest of iance as well as Team Ice Cube! and Beep follow. While Lightning and his team are digging, Lightning states that he hears screaming above them. The rest of iance determine that other teams had followed them, resulting in them setting up a plan to prevent Team Ice Cube! and Beep from falling on them and later Bubble alone.

In "Don't Dig Straight Down", Lightning compliments Flower when she points the team in the correct direction to the emerald. His team ends up avoiding the emerald due to Golf Ball being above them, much to Lightning's confusion, only to find another one soon after. After being chased by lava for a bit, iance almost breaks the surface but instead ends up trying to dig around Golf Ball more than 2,763 times. Lightning and his team eventually make it through the surface and are safe from elimination. To Lightning and his team's shock, the lava starts flowing above ground, killing him along with Ruby, Fanny, and Snowball.

In "The Escape from Four", Lightning is first seen moving towards Four to watch him struggle to suck up Spongy. Lightning is later seen tugging on Spongy in order to pull the exitors out of Four. Lightning is one of the 40 contestants to quit BFB to compete in TPOT.

In "You Know Those Buttons Don't Do Anything, Right?", Lightning is sad he wasn't on a team with contestants shaped like zigags. Snowball tries cheering him up by teaming up with him but Lightning doesn't want to be with him anymore and leaves. Marker later wants to team up with Lightning, asking to be friends, and he obliges despite not liking how he didn't want to be friends back in BFB 1. They both join Death P.A.C.T. Again, with Lightning admitting he's not good at preventing death. During the challenge, he says he won't forget to fly this time and flies to the top of the building. However, this means he can't go back to help his team. When they lose, Lightning blames himself for the loss, until he and everyone else starts blaming Two for not projecting their voice, and he zaps them twice. 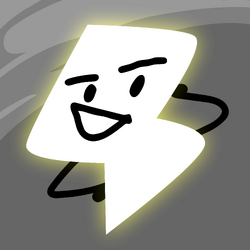