< Lightning
View source
watch 02:56
Doctor Strange in The Multiverse o Madness - The Loop
Do you like this video?
Play Sound

This page is about the relationships and interactions between Lightning and the other characters.

Lightning usually affiliates himself with other rebellious characters such as Snowball, Pencil, and Gelatin. Despite this he can be relatively calm and kind depending on who he's interacting with.

In "Today's Very Special Episode", Bell asks Lightning to zap her in order to get the climbers off her string, which surprises Lightning.

In "The Liar Ball You Don't Want", Lightning and Bottle are both excited for Donut hosting his first Cake at Stake.

In "Getting Teardrop to Talk", when Lightning is told to zap Flower, Bubble tells him to do what he thinks is right, he agrees with her. Later he's briefly stopped by Bubble again from zapping Fanny.

In "The Liar Ball You Don't Want", Lightning explains to Bubble that Loser was everyone's hero, so they're acting murderous because they don't know what's right anymore. He then decides to nab the Liar Ball from everyone else, which Bubble cries out for him not to.

In "Return of the Rocket Ship", Lightning is concerned for Bubble when she is holding up all of Team Ice Cube! and works with his team to save her from Beep also falling on her. He is shocked when Flower ends up popping Bubble after their efforts to save her.

In the first and second seasons of BFDI, Lightning and Cloudy were usually paired together. Lightning appeared in Cloudy's joining audition in "The Reveal", and he also killed Pin with Lightning in "No More Snow!".

In "The Liar Ball You Don't Want", Lightning is so excited for Donut hosting his first Cake at Stake that he decides to take a picture of him before he starts.

In "Getting Teardrop to Talk", Lightning tells Snowball to team up with Fanny because of her "murderous" attitude and for how she hates everyone. Later, Lightning ends up zapping her when Pencil tells him to.

In "What Do You Think of Roleplay?", Fanny mentions Lightning forgets he can fly and is able to point out the impostor, suggesting she knows him well.

In "You Know Those Buttons Don't Do Anything, Right?", when Lightning blames himself for his team's loss, Fanny tells him that no one heard Two say the extra rule of nobody being allowed to go back down.

Lightning and Flower are most likely enemies. Although Bubble told him to do what he felt was right after Match told him to zap Flower in "Getting Teardrop to Talk", he zaps her anyway, twice. This also happened in "Why Would You Do This on a Swingset", after Flower had enough of him clarifying the challenges.

In "Get to the Top in 500 Steps", however, they appear to be slightly more friendly, as Lightning smiles at her when he catches her after she falls off the 500-step staircase.

In "Don't Dig Straight Down", when Flower corrects the path the team was taking in their path for the emerald, Lightning is impressed, telling her she "really knows her away around here."

Status: Possibly friends as of BFB 11 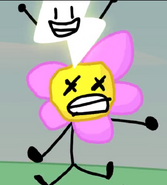 In "Fortunate Ben", Lightning is obliterated by Four for using his flight to give his team an advantage in the contest.

In "Get to the Top in 500 Steps", Four threatens to kill the flyers, Lightning included, if they try to do the contest.

In "What Do You Think of Roleplay?", Lightning doesn't believe Four and X are as fine as they say they are since they were behaving differently.

In "This Episode Is About Basketball", Lightning helps Gelatin grab Fries' fries.

It's unknown if Lightning was ever a fan of Loser like most of the other contestants. He's shown that he's aware that everyone looks up to him in "The Liar Ball You Don't Want".

When Lightning asked Marker if he wanted to be friends with him in "Getting Teardrop to Talk", Marker didn't seem interested. Lightning didn't care about his decision.

In "The Liar Ball You Don't Want", Marker and Lightning can't figure out why Donut isn't appearing on their camera until Lightning realizes that he was zoomed in on his hole.

In "You Know Those Buttons Don't Do Anything, Right?", Lightning accepts Marker's request at being friends and teammates, though he's still upset at him for refusing his offer back in BFB 1.

In "Getting Teardrop to Talk", Pencil and Match manipulate Lightning into zapping several characters. He calls them maniacs at first for this but seems to have no problem with being told to zap Fanny later.

Status: Possible friends on his side

In "What Do You Think of Roleplay?", Lightning, disguised as Pin, asks Needle how long she's been under the side effects of the Photo Cake. Needle points out how Pin was there when it happened causing Lightning to get caught as the impostor.

In "The Liar Ball You Don't Want", Lightning indirectly zaps Pie and causes her to fly away from the liar ball.

In "No More Snow!", Lightning happily zaps a tree which falls and kills Pin.

In "You Know Those Buttons Don't Do Anything, Right?", when Lightning explains that no one can go back down once they reach the top, Remote says that explains a lot and forgives him for not coming back down to help them earlier, and Lightning smiles. Lightning is also shocked and concerned for her when she removes her battery.

In "Get to the Top in 500 Steps", when Fanny and Snowball are arguing, Lightning can be seen leaning on Ruby's head.

In "Return of the Rocket Ship", Ruby calls Lightning "thunder." He then says it would be like if he called her "shatter sound." Ruby angrily replies that he didn't need to threaten her and that if he didn't want to dig he could've just said so. Lightning is caught off guard by her anger and clarifies that he really wants to dig and digs a massive hole in the ground to prove it.

In "Don't Dig Straight Down", Lightning asks his team if they really just skipped an emerald just because Golf Ball was there. Ruby says it's no big deal since they could just find another one. Lightning has his doubts but is surprised when Ruby ends up finding one.

In "You Know Those Buttons Don't Do Anything, Right?", Lightning asks Tree if he has to be good at preventing death to join his team. Tree says no and that they accept students, so Lightning joins, asking "Why didn't you say so?" During the challenge, Lightning makes it to the top of the building. Tree tries asking him how everyone else is supposed to get up. Lightning is unable to hear him, but after Tree uses a megaphone, Lightning tries going down in order to get the rest of his team, but isn't able to. When Tree dreads over having to go down to get Black Hole, Lightning tells him they aren't allowed to go back down.

Lightning and Snowball are likely friends as they are often seen near each other with Lightning leaning against Snowball. In "Getting Teardrop to Talk", Snowball picks Lightning to be on his team because he's killed "dozens" of people. Lightning suggests that Snowball should team up with Fanny because of her "murderous" attitude. Later, when Lightning zaps Flower, Snowball angrily asks why he won't zap him instead, Lightning just gives him a look in return.

Snowball clarifies the challenges to Lightning in BFB 1 and 2.

In "Fortunate Ben", Lightning attempted to fly his team to victory, and Snowball cheers him on. Snowball looks on in horror after Four kills Lightning.

In "Enter the Exit", when Bubble is recovered, Lightning is sitting on Snowball. Snowball does not seem to mind.

In "Get to the Top in 500 Steps", Lightning is leaning on Snowball when Flower goes to compete in the challenge. Again, Snowball does not seem to care.

In "What Do You Think of Roleplay?", they sit together during the Cake at Stake.

In "Don't Dig Straight Down", Lightning asks Snowball if they are just digging in random directions, Snowball replies with "Pretty much". When Lightning tries to figure out why his team hates Golf Ball so much, Snowball tells him not to ask.

In "You Know Those Buttons Don't Do Anything, Right?", Lightning is upset over not being noticed as a zig-zag. Snowball attempts to cheer him up, saying he still has him. Despite having no negative interactions, Lightning is no longer interested in Snowball, and says he doesn't want him. Lightning then flies away to look for other teammates, leaving Snowball by himself.

"We are gonna go far, Lightning!"

Lightning leaving Snowball, no longer having interest in him

In "Getting Teardrop to Talk", Lightning zaps Spongy. This, however, was against his own will because Pencil told him to.

In "You Know Those Buttons Don't Do Anything, Right?", when Lightning attempts to go back down to get his teammates, Two stops him with their powers and tells him that he's not allowed. When his team loses, Lightning feels remorse until he's reminded that Two made things difficult for them by not mentioning the rules loud enough. Lightning then zaps them twice.

In "The Escape from Four", he pulls on Spongy in order to free him and the other exitors from Four.

In "What Do You Think of Roleplay?", Lightning feels insulted by the fact that his team is taking so long to figure out that he's been replaced.

In "Don't Dig Straight Down", Lightning is confused as to why his team hates Golf Ball so much.

In "You Know Those Buttons Don't Do Anything, Right?", Lightning feels left out when Gaty, Saw, and Barf Bag all join the same team since they all have zigzags, which he also has.

In "You Know Those Buttons Don't Do Anything, Right?", Lightning is eager to show his worth to his teammates and flies straight to the top of the building. He tries to go back down to carry them up but Two won't allow him to since it's against the rules.