Battle for Dream Island Wiki
Register
Don't have an account?
Sign In
Advertisement
in: Lists, Items, Food,
and 6 more

This is a list of all edible items and characters in Battle for Dream Island.

Donut, as seen in the IDFB opening

Fries, as seen in BFDIA 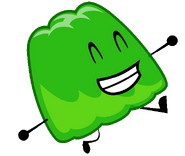 Gelatin as seen in one of the BFDIA voting screens

Eggy, as seen in the IDFB opening 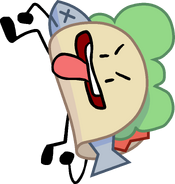 Taco, as seen in the IDFB opening 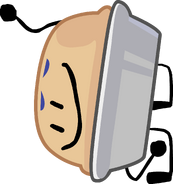 Pie, as seen in the IDFB opening 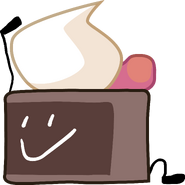 Cake, as seen in the IDFB opening

Lollipop, as seen in the IDFB opening

"Fries! Your fries are disgusting." —Gelatin[BFDIA3]

** character was used as a cake for Cake at Stake 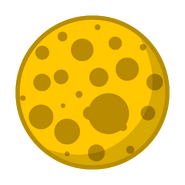 Waffle, as seen in BFDIA 5b 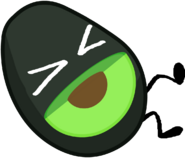 Avocado, as seen in "The Escape from Four". 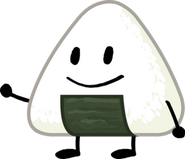 Onigiri, as seen in "The Escape from Four".

Leek, as seen in "The Escape from Four".

The Carrot Cakes, as seen in "The Hidden Contestant" 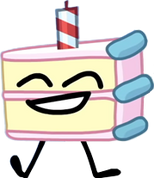 Cheese Orb being used for Cake at Stake[BFDI23]

** character was used as a cake for Cake at Stake

There are also edible recommended characters who appear very briefly.

A plenty of these Orange Gumballs were seen in an ad during Barriers and Pitfalls, and one was eaten by a round yellow face.

In Vomitaco, Pencil makes an ice cream cone using a cone, Ice Cube, Rocky's vomit mixed with colored water, and some whipped cream. It causes Bubble to fall off her platform and pop. Pencil then concludes that it tastes absolutely terrible, then throws Ice Cube into Rocky's Vomit.

Yoyleberries are fruit from the exotic Yoyleland. They, along with anything made from them, can cause a living person to turn to metal. They have been used to make Yoylecake and Yoyle Stew.

Yoyleberries were first mentioned in The Glistening and later appeared whenever Yoyleland was visible, including being eaten by Ruby and Bubble in The Long-lost Yoyle City and by Leafy sometime before Get Digging.

Bubbly Pop is a soda that was handed to Bubble by Puffball Speaker in Zeeky Boogy Doog. Bubble was not allowed to participate in the challenge with the rest of Team No-Name, so Puffball Speaker gave a special soda named Bubbly Pop.

In It's a Monster, at the end of the video, Cary promises that the next episode part would be out on time, or else he'd give up his gumdrop, among other things.

In Welcome Back, FreeSmart has collected several gumdrops over the years and they proceed to eat them.

Grotatoes are a new strain of potatoes invented by Tennis Ball for Fries to use in Welcome Back. They require less sunlight to grow, but they might possibly have some weird side effects.

So far, no one has seen what grotatoes look like, but Cary has revealed what they might look like if IDFB 2 ever comes out (which most likely won't happen) with an image on HTwins Central.

In Welcome Back, Coiny makes a pun about Fries taking a deep breath. Then, at night, he brings boiling frying oil to Fries and presumably dunks his face in it, in an attempt to create Deep Fried Breaths. This is never seen.

In The Liar Ball You Don't Want, Book is seen eating her bag of nachos in the Moon and dipping it into cheese in the communicator dish from the Rocket Ship on The Moon.

Snacks from Get in the Van

Foods made in challenges

Main article: /Made in challenges

In "Sweet Tooth", a large array of ingredients are available for the contestants to use to make their cakes.

In "Vomitaco", the contestants are given ingredients for putting their tacos together.

In "Get Digging", Pencil, Match, and Ruby use a variety of inedible ingredients for the team’s Yoyle Stew.

In the rejoin challenge in "Half a Loaf Is Better Than None", the eliminated contestants had to gather loaves of bread, and the one with the most loaves would rejoin. While some drowned, Spongy rejoined with 38 loaves. They are also shown in Vomitaco, when Tennis Ball got 50/100 points, and said he expected more points since the Announcer fed the eliminated contestants only bread for the past 13 months.

In "Lick Your Way to Freedom", the challenge is to lick jawbreakers to free contestants trapped inside of them.

In "The Liar Ball You Don't Want", the challenge is to to keep the Liar Ball, an inside out jawbreaker with Loser inside, from landing in a team’s crater.

Other things that have been eaten

Other characters who have been eaten

Other items or characters who have been tasted but not eaten