List of minor items in Battle for Dream Island

Throughout Battle for Dream Island, many minor or insignificant items appeared. This list covers items that first appeared in the first season. Appearances from later seasons are also covered here.

It was used to roll into bowling pins for the contest. It is either orange or gray in color and some has a smiley faces on. It was a recommended character, recommended by TheBombDigityshis, along with the bowling pins. 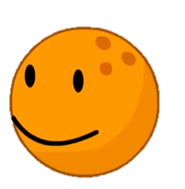 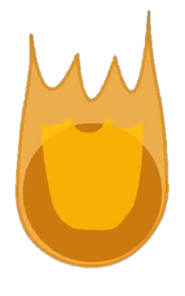 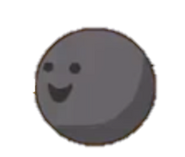 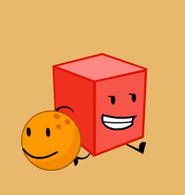 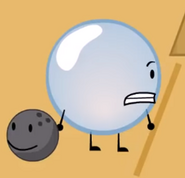 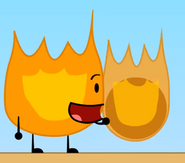 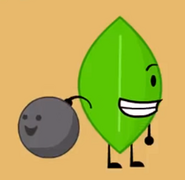 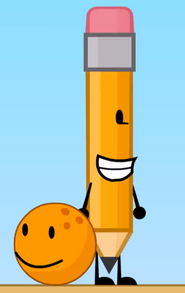 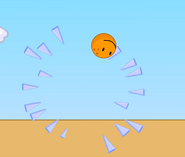 These 10 bowling pins were used in "Bowling, Now With Explosions!" as part of the contest.

When one pin would be knocked down, the contestant who did so would get a point. They have smiley faces on them. They were a recommended character, recommended by TheBombDigityshis, along with the bowling ball.

"Get Digging"
A bowl was used in "Sweet Tooth" as part of the baking contest. It was used again in "Get Digging" by Team No-Name. Ingredients were placed and mixed in the bowl to make Yoylestew. They come in different shapes and sizes.

It was first used in "Sweet Tooth" by many contestants. Golf Ball used a bowl for her cake mixture. Leafy made a big cake with a big bowl. Needle did as well to make her cake. Rocky barfed into a bowl that contained water.

It made an appearance again in "Get Digging" by Team No- Name. Ruby, Pencil, and Match used a bowl to make Yoylestew. However, the bowl used is more cylindrical and much larger.

In "Hurtful!", there were 'Delete Pole' and 'Create Pole' buttons that deleted and created the poles to climb out of the volcano.

In "Insectophobe's Nightmare 2", the Announcer jumped on a 'Delete Bugs' button to delete the bugs he created.

Communication
Cellphones, or simply phones, are communication devices used in "Return of the Hang Glider" by Leafy, who buys Dream Island from Announcer. They are most likely conscious, as seen by their rebel messages against their owners.

They seem to be simple gray numeric keypad phones with an antenna. Money, documents, and possibly other things can be passed in between the connection. The screen has been used by the phone itself to communicate in a hostile manner.

In "Return of the Hang Glider", Firey declines Leafy from entering Dream Island due to the past events of "Insectophobe's Nightmare 2", making her call Announcer using her cellphone to buy the island. This results in the corruption of BFDI.

Announcer about to sell Dream Island.

"Wow! This will help pay for our budget!"

To help make the boat

A hammer was used in "Take the Plunge: Part 2" by Firey while making a boat as the contest.

While the Squishy Cherries were making their boat, Firey is seen helping them. He was holding a hammer but then Firey accidentally hit his hand with the hammer, and Pin told him to be more careful.

Firey hits his hand with a hammer.

The hammer in Cloudy's Collection.

These ingredients were used in many episodes to make different foods: in "Sweet Tooth" to bake a cake, "Vomitaco" to make a taco, and "Get Digging" to make Yoylestew. 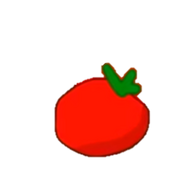 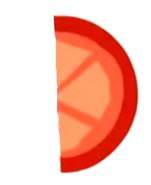 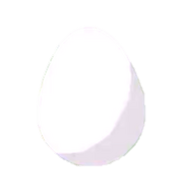 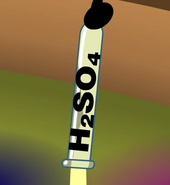 For the recommended character, see Bread.

A loaf of bread is a type of food in Battle for Dream Island.

Loaves first appeared in "Half a Loaf Is Better Than None". The eliminated contestants were assigned to take loaves from a large basket full of bread and put them into their own baskets. The one with the most would rejoin the game, which ended up being Spongy.

It briefly appeared again in "Vomitaco". A basket of bread along with the eliminated contestants were dumped into the TLC.

In "Hurtful!", loaves of bread are used again as part of the combined contest.

A large basket full of loaves of bread

Spongy bringing in a dozen loaves of bread

Flower placing loaves of bread in the basket

Golf Ball with one loaf of bread on her head

Snowball placing loaves of bread in the basket

Match placing loaves of bread in the basket

Coiny sinking into the loaves

You Know Those Buttons Don't Do Anything, Right?"

The megaphone was used in "Take the Plunge: Part 2" by Match.

When the Announcer asked the teams what their names are, everyone is talking, then Match can be seen talking through the megaphone.

The megaphone was also used in "X Marks the Spot", "The Tweested Temple" and "You Know Those Buttons Don't Do Anything, Right?".

"Are You Smarter Than a Snowball?"

Setting stuff ablaze (except for water and copper objects)

The Mini Match is a inanimate match used by Match to play Spongy Cake, it made it's first appearance in Are You Smarter Than a Snowball? while Match and Pencil where playing Spongy Cake, it set the test's ablaze, making Pencil mad at Match.

The Mini Snowball is an inanimate snowball first used by Pencil in Crybaby! she finds it on the Snowy hill in the Skiing Contest, Pencil and Match then play Spongy Cake, it later reappears in BFDIA in the episode "It's a Monster" FreeSmart has a snowball fight, which later makes turns the gasoline into glue.

This pencil was used in X Finds Out His Value by Four to solve an algebra problem. It was used again in "Are You Smarter Than a Snowball?" for the contestants' tests. The pencil in these episodes is Pencil's asset.

Shovels were first seen as Cake at Stake prizes in BFDI. In "Get Digging", shovels are used by Team No-Name to get ingredients for their Yoylestew by digging underground.

They return briefly in "Getting Teardrop to Talk", used by Dora when digging for islands.

In "Return of the Rocket Ship", shovels are used to dig for X's treasure buried underground. They are first seen inside of a crate. Ruby picks up some shovels for iance to use and hands them to Snowball, Flower, and Lightning respectively to dig. Later on, Team Ice Cube! can be seen digging with the shovels. Although the rest of her team isn’t seen using the shovels, Teardrop can be seen holding one as Ruby picks some up from the crate. So far, Teardrop, iance, and Team Ice Cube! are the only ones seen using the shovels. Each team corresponds to different colored shovels.

Shovels as the prize BFDI 19

Ruby lending a shovel to Lightning, asking him if he wants to dig

A bunch of shovels in a box

A shovel on the ground

A bunch of shovels

Contestants that are digging

To set where the start and finish is

The start and finish line is an item that appeared in "Take the Plunge: Part 2" and "Barriers and Pitfalls" that got ripped by Pin, and got passed by Firey, Needle, and Teardrop.

The challenge of "Barriers and Pitfalls" was to start at the start line then pass all obstacles to reach the finish line. Firey, Needle, and Teardrop were the the ones who passed the line. 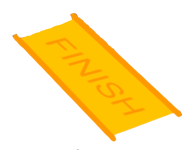 Varies
These tacks were used in Blocky's infinite Bubble killing prank in "Barriers and Pitfalls". They all use Pin's asset, with some of them being recolored orange and yellow. 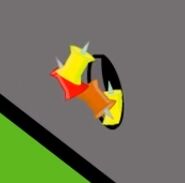 Keeps objects afloat
The team balloons appeared as part of a challenge in "Lofty" alongside the nail baskets.

The balloons were displayed in pink, green and blue colors. The strings were to be tied around the contestant's waists to help them stay in the air. Snowball complained about the Squishy Cherries' balloons being pink since his team's color is red. The Announcer said that red balloons were too expensive.

They reappeared in "Hurtful!" when the contestants had to go through every challenge.