List of minor items in Battle for Dream Island Again

This is a list of minor, inconsequential, or insignificant items that first appeared in Battle for Dream Island Again. Appearances from later seasons are also covered here.

For items that first appeared in the first season, see List of minor items in Battle for Dream Island.

Disintegrate into ash (according to Gelatin)

Their first and only appearance (so far) was in "Get Digging" when Gelatin decided to shoot the spitballs at Leafy while she was throwing knives at him and Needle. Leafy, however, avoided all 262 of them, making them useless.

"Zeeky Boogy Doog"
Bubbly Pop is a drink given by Puffball Speaker Box to Bubble to make up for her not being allowed to compete with her alliance, as she wasn't an official contestant.

"Return of the Rocket Ship"

Distance Tracker 2000 was first seen in "No More Snow!", where Needle uses it to see how much longer they need to walk to arrive at Yoyle Mountain. She sees it says 70 feet left, and Yellow Face and Needle then cheer, thinking they are that close to Yoyle Mountain. However, Coiny points out that it was actually the distance to Evil Canyon, and the real distance to Yoyle Mountain is 2761 miles. Shortly after, W.O.A.H. Bunch falls into Evil Canyon and the Distance Tracker 2000 is never seen again until "Return of the Rocket Ship", where Golf Ball uses it to track the coordinates of an emerald.

The Distance Tracker 2000 in BFDIA 5c

"What you want, you want to press this."

Warning:
It is of doom.

The doom in the message may be referring to what happened in "It's a Monster". It is unknown why Ruby put that text on top of the Mini Fridge of Doom.

In "It's a Monster", Ruby throws snowballs out of the Mini Fridge of doom causing the other contestants in the van to keep doing it until the entire FreeSmart SuperVan gets filled with snow, popping Bubble in the process. 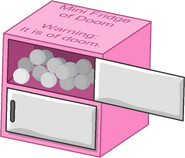 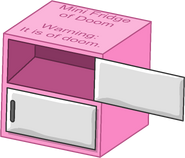 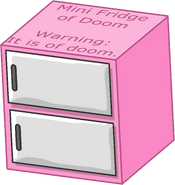 Knives were used by Leafy and Pin in BFDIA. It was also used by Book to cut a rope in "No More Snow!", dropping a weight and causing PuffBall, Fries and Evil Leafy to be crushed to death. It was used again later in the same episode by Match in an attempt to kill Pencil.

It was seen again in "Welcome Back", when Leafy planned to throw it when Coiny took some deep fried breaths with Fries, but didn't because she's too horrified at the pain Fries has to go through when doing deep fried breaths.

The flamethrower is a weapon that appears briefly in "No More Snow!" and "The Hidden Contestant". The flamethrower was firstly used by Yellow Face in order to kill Needle, so that Yellow Face and his team could recover her later by using the HPRC that FreeSmart had.

The flamethrower appeared again in BFB 26 in one of Profily's flashbacks. The flamethrower was going to be used by Profily to burn away the Bugs in one of the challenges. However, they were eventually informed by Puffball Speaker Box that the bugs were fireproof, which renders the flamethrower futile to use against the bugs.

The Leafy Detector is an item used by Pencil in "Yeah, Who? I Wanna Know" to find Leafy during the scene where the BFDI contestants are chasing Leafy through the Evil Forest after she stole Dream Island. It was advertised by Boombox at the epilogue when Leafy is in Yoyleland at the end of the episode. The way it works is unknown and hasn't been explained.

The Anti-Yoyler is an item mentioned by Fries that can supposedly turn a character infected with Yoyle Metal back to their normal form. It has only been mentioned in the BFDIA 6 Deleted Scenes video, where it was used on the members of FreeSmart and W.O.A.H. Bunch, and it is currently unknown what it looks like. It might be some sort of remote because of the button sound effect that was played right after Gelatin used it, who complained about everyone being Yoyle Metal.