If the character was made by jacknjellify but was never used in any merchandise or promotional material, then they belong in Unused or unseen content.

The BFDI Shop
Shirty is a merchandise-exclusive character that was first seen in The BFDI Shop. They are a cotton t-shirt with an object's face in the center.

They are available to purchase on jacknjellify's Spreadshirt store in Men's, Women's and Kids' sizes. Shirty is not available for purchase on Redbubble or CrowdMade. 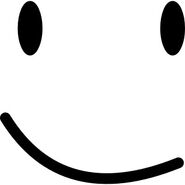 jacknjellify's YouTube community tab
User is an object character that appeared in jacknjellify's community tab, which appears to be based on the default YouTube profile icon. They appeared next to Loser in an image asking whether the reader was a Loser or a User.

Pumpkin is an object character that was seen in the jacknjellify 2014 Halloween Tweet. In the image, they are seen licking Woody, which scares him.

The original image with Pumpkin in it.
Add a photo to this gallery

This character has transparency in their design.

March 2020 Tweet by fernozzle
Drear-Top is an object character that appeared on Michael Huang's Twitter account on a tweet from March 10th, 2020. They are a version of Teardrop with their asset turned upside down and their face is moved towards what would be Teardrop's base. Despite the claim in the tweet that Drear-Top is BFDI's first hyphenated character, 8-Ball has been a contestant for 2 years before the tweet had been posted.

Infinity is an number character that was seen in the jacknjellify 2020 Autism Acceptance Day Tweet.

Blue Block is an object character that appeared in Become a Jacknjellify Member — (BFB 18 on Monday, May 4). The character was found multiple times around the video demonstrating member perks and other things, as well as in the video's thumbnail. These characters are meant to represent you, the viewer, and other viewers that support Jacknjellify content.

Characters
Retrieved from "https://battlefordreamisland.fandom.com/wiki/List_of_promotional_characters?oldid=2189045"
Community content is available under CC-BY-SA unless otherwise noted.