Battle for Dream Island Wiki
Register
Don't have an account?
Sign In
Advertisement
in: Characters, Contestants, Voiced by Sabrina,
and 6 more
English

View source
watch 01:31
Who is Liy?
Do you like this video?
Play Sound

Liy (pronounced \laɪˌi\ or the word "lie") is a female contestant on Battle for BFDI and a former member of team Death P.A.C.T.. She originally appeared as a character in the joke video "BFDI APPISIOTE 225555555!!!!!", in which she was brown and white instead of light blue, with this appearance returning in "Fortunate Ben" when she was eliminated. She also appears in Battle for Dream Island: The Power of Two.

Liy, being a light switch, has the ability to toggle her switch. She first appeared onscreen in animated form in "Getting Teardrop to Talk", when she asks Tree to help her get Teardrop to talk.

Liy appears to be a plastic light switch from the front and a wooden switch from the back. Specifically, she is a rocker model; a type of light switch on a plane that has one half slightly elevated for easier use. Her front side is a periwinkle blue, and her backside is a brownish-orange color with her switch being a single-pole toggle colored a light yellow.

Liy is seen as somewhat of a pushy and rather manipulative contestant. She can sometimes be seen trying to force other contestants to do what she wants, like making Ice Cube wiggle Teardrop's vocal cords to make her talk, or by trying to get Clock to form a truce with her. Liy also complains about not being supported, as shown in BFB 11 when she did not get enough votes to rejoin.

However, Liy can also be seen as a curious individual, who manipulates others in the search of knowledge, such as wondering what Teardrop has to say, or wondering what is at the top of Bell's string.

In addition, she can also be perceived as a contestant attempting to be kind, who wants to make up for her murderous past. She is seen saving the lives of various contestants, and she has in fact saved 2,753 lives (10 away from 2,763).

Liy could also potentially be an irritable person, as she can become angry quite quickly in some ways, such as when Ice Cube decides to stop helping her, and when she discovers she had the most votes. She also gets very cranky when she's bored as seen in "Enter the Exit".

Naturally curious, Liy is one of the most adventurous characters in BFDI. She is a plastic light switch. To some, though, she is somewhat pushy. She's always forcing others to do as she wants them to do, such as trying to get Ice Cube to wiggle Teardrop's vocal cords to get her to talk.

Liy is curious and will always look to discover new things, such as the top of Bell's string.

Did You Know?: Liy wishes that she was an empress, so she could say "I, Empress, am pressed and impressed" when toggled skillfully.

Liy makes her debut in "BFDI APPISIOTE 225555555!!!!!". She is seen briefly when Michael Huang shakes the camera at a light switch on a wall.

Liy makes her animated debut in "Getting Teardrop to Talk". In it, she asks Tree to hold Teardrop's jaw open while she fiddles with her vocal cords in hopes of making her talk. Tree declines the offer and "leafs". Ice Cube later appears, and Liy asks if she is cool. Ice Cube is unsure, but Leafy interjects and says Ice Cube is cool, along with everyone else. Liy asks Icy again if she wants to help her make Teardrop talk. Ice Cube says "Yeah!". They immediately start playing around with TD's vocal cords, and Liy says she can almost hear Teardrop's voice. Bracelety is seen cheering Icy, and Clock asks her why she's condoning Ice Cube's "torturing" (wiggling the vocal cords) of Teardrop.

After Clock's argument with Bracelety and Fanny, he tells Liy to stop trying to force Teardrop to talk. Liy refuses, and then Clock asks Icy if she wants to stop. Liy interjects that Icy should make her decision, but Ice Cube says she wants to stop. Clock appreciates Ice Cube's decision, but Liy becomes frustrated with Ice Cube and says she thought that Ice Cube was cool. Icy apologizes and continues along with Liy to try to make Teardrop talk.

Liy and Ice Cube's experiment is cut off when Teardrop is hit with a fork and chomps down on Ice Cube's legs. She leaves, hitting Clock and Liy both on her way out. Liy tells Clock that they've "both wronged Teardrop today", and holds out her hand for a truce. After she tries to grab his clock hands, Clock finally shakes her hand. Ice Cube inserts herself into the truce as well.

Upon his arrival, Liy sees Four and asks what it is. Pie suggests that she squish it, which she does, causing Four to scream. Saw tells Liy to stop because she doesn't know what it does. When X appears as well, Liy squishes him and says that he has a different texture than Four.

When picking teams, Liy overhears Pie say that she hasn't killed anyone. She is impressed and mentions that she's killed before, however it was "extremely disturbing". Wanting to learn to resist the temptation to murder, she joins Pie's team. Her team is the first safe thanks to Pen.

In "Lick Your Way to Freedom", when Black Hole frees Foldy from the jawbreaker, Liy glares at her and tells her to go back to her team.

In "Today's Very Special Episode", after Bell calls for help, Liy finds her and asks what's going on. Upon learning that Eraser is climbing Bell's string, Liy declares discovering what lies at the top her "next adventure" and starts climbing, much to Bell's dismay. During the contest, forks are seen circulating around Liy. She guesses this is due to a malfunction of Lollipop's fork repellent.

In "Fortunate Ben", during Cake at Stake, Liy falls into the bottom two with Pie and says that "voters should see [her] in a positive light" since she "said one pun two months ago". When it is revealed that Liy will be eliminated with 7,553 votes, she makes a speech, revealing that she has saved 2,753 lives out of the 2,763 lives Death P.A.C.T. has saved in total. She says that she joined Death P.A.C.T. with the intent of putting her "traumatic killing past" behind her and has spent hours and a lot of willpower saving people instead of murdering. Without the support of her team, she wonders what the point is of restraining herself. She presses her switch, then continues pushing until it revolves around and reveals a toggle switch on the back. She also presses this. Tree asks Four to suck her up, which he does.

After she's gone, the team discusses what she was a switch for. Pillow claims that Liy is "much more" than just a light switch, but doesn't get a chance to elaborate.

In "Enter the Exit", she is seen in the EXIT along with Pencil, Leafy, and Bracelety. She ponders when Four is coming back. Pencil doesn't know when, and states that he "disappears sometimes". Liy says that her question was a rhetorical question, but Pencil tells Liy she made an error. Liy says that she's bored because the four students inside the class have had to do the same worksheet 50 times. When Pencil says that one of the many things the students have to do is to have an "appreciation ritual" for Four, Liy says that the "ritual" is not math.

When Bracelety finishes her work, Pencil sighs because break time had just begun, but Liy reiterates that the break time was not for her, but for Bracelety. When the males who were eliminated but were not sent come into the class, Liy is shocked that Loser was eliminated. When 8-Ball and Stapy announce they want to get out of the class, Liy tells them they "just got here". Her rejoining audition is admitting that she made a mistake prior to her elimination, and telling the viewers if they don't vote for her, her team name won't be applicable anymore. This could be an indirect threat.

In "Get to the Top in 500 Steps", she and the other EXITors ponder on what lies behind the locked door behind Pencil's seat. Stapy teases her, but she hits him and tells him the door is locked. Just before Liy uses one of Stapy's staples that she had just made into a lockpick to exit, Four appears and tells the EXITors to sit. Since she was sat behind Roboty, Four can't see Liy. However, she still does not rejoin. She angrily asks why people do not support her. When 8-Ball asks her if she is sad because she did not rejoin, Liy proclaims that she isn't and that she has found her "next adventure".

In "The Escape From Four", Liy is first seen in the EXIT, hearing Loser reading Donut's diary. She tells everyone that she doesn't agree with the idea of being happy together in the Exit, which shocks everyone. She tries to explain that they should be happy "out there". Bracelety is confused so she explains that they should escape, saying they are strong enough, which Loser and Stapy agree to.

A while later, Liy asks Stapy how the stacking is going, but after Stapy obviously appears to be struggling, she later cheers in delight as Match and Pencil ask Loser to climb up instead of Stapy. She then throws some things found in the exit to Loser to stack. When asked if she can throw anything else, she claims there's nothing left to throw. She tells Match and Pencil to help Loser reach Four's mouth, but they both decline her request. Liy then angrily threatens that if they don't do it, both of them will be demoted to "bember", despite not being in the alliance, which finally makes them agree to do so.

Liy is also climbing the pile along with Stapy to help them, but sees half of Spongy's body enter Four's body. She says that climbing through Spongy is their best option to reach the outside world, much to Match and Pencil's disgust. She tells them to face it, because Four's mouth is too high for them to reach, but both of them just decide to bail. When Loser tells the others that Spongy's holes are stretchy enough to fit all of them, she hops inside him, along with Bracelety, David, Dora, Loser and Stapy. She is able to pop out of one of the holes, but quickly gets sucked into EXIT again as Four pulls all of the eliminated contestants (except Loser and Spongy) back in.

In "Chapter Complete", Liy is first seen asking Four if he went somewhere, after hearing a voice asking when he'd be back. Later, Four claims that everyone hates them, and Liy, in a deadpan voice, tells him that he shouldn't say that. When Four zaps 8-Ball to death, Liy used this as an example of why everyone rejected him. Liy, along with the other imaginary characters, is then snapped out of existence by Four.

In "You Know Those Buttons Don't Do Anything, Right?", Liy gets up from her fall from Spongy and tells Stapy that it's time to for plan B. Stapy listens and knocks down their tower of items. They both hang the EXIT sign back up and Stapy gives her a hammer. Pencil asks what they're doing. While removing the boards with the hammer, Liy explains that she didn't even get to take a peak behind the back door before Four caught her and boarded it up and won't hesitate to do so now. While quivering, she pulls out one of Stapy's staples to unlock the door and slowly opens it. 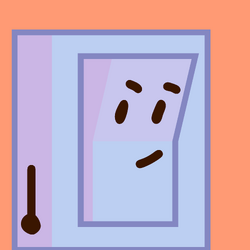