The Locker of Losers, abbreviated as LOL, is a container used to hold various characters and objects throughout the Battle for Dream Island series. It is a large blue lidded metal box with its name written on the side, and it is adorned with a padlock. Its walls are five inches thick. It is similar to the Tiny Loser Chamber, though the Locker of Losers is larger.

Characters in the LOL in IDFB

The Locker of Losers sending the Recommended Characters that didn't join 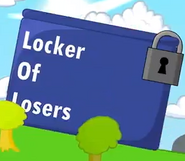 The Locker of Losers in "Get Digging"

The LOL as it appears in the IDFB intro